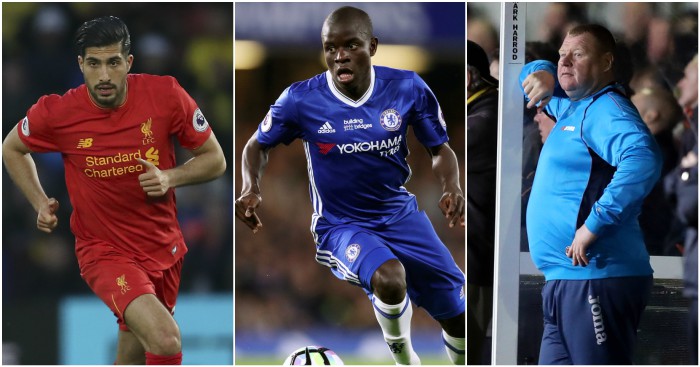 Player of the season: N’Golo Kante, for the second year running. Kante finally won the PFA Player of the Year award that was due in 2015/16, and becomes the first outfield player to win consecutive Premier League titles for two different clubs. He is the man who made defensive midfielding sexy again, nine years after Claude Makelele left English football.

Young player of the season: Dele Alli, also for the second season in succession. If Alli merited the nod last year then he is a tap-in now. Eighteen league goals and seven assists from midfield for a young man who only turned 21 last month. If he was doing this in La Liga, we’d all be going potty.

Manager of the season: Antonio Conte. This award doesn’t always have to go to the coach who wins the title, but when you turn around the dank mood of 2015/16, achieve the second-highest points total in Premier League history, win more league matches in a Premier League season than ever before and guide your team to 13 straight league victories, you deserve it.

Worst manager of the season: David Moyes. There were some with worse records (Mike Phelan and Bob Bradley), but none lasted so long despite extreme under-performance as Moyes. He started the season with pessimistic predictions of woe and ended it resorting to embarrassing attempts at positivity. Moyes may have jumped the Sunderland ship before returning to the Championship, but that is now his level.

Goalkeeper of the season: Hugo Lloris

Defender of the season: David Luiz

Striker of the season: Harry Kane

Game of the season: We are not limited by Premier League boundaries here (f**k off, we make the rules), and so can only plump for Manchester City’s Champions League quarter-final first-leg victory over Monaco. It is so rare that a match is hyped up to the nth degree and yet still smashes through that high ceiling.

Worst game of the season: Swansea City 0-0 Middlesbrough. The starter to Arsenal 2-2 Manchester City on a Sunday afternoon, like preparing for a wonderful roast dinner by shovelling handfuls of faeces into your open mouth. There were three shots on target in 90 minutes.

Goal of the season: Emre Can. Olivier Giroud and Henrikh Mkhitaryan’s scorpion volleys made you jump further out of your seat, but for sheer technique and placement, Can’s outrageous overhead kick to win a dire match at Vicarage Road wins it. It was also a winner that maintained Liverpool’s charge for a top-four finish.

Best signing: N’Golo Kante. And so we have the same player, young player and signing of the season as a year ago. Given the ridiculous money spent by the two Manchester clubs, that should be deeply embarrassing. Chelsea bought the midfielder who won Leicester the title, and he did the same at Stamford Bridge. Football is simple sometimes.

Worst signing: Claudio Bravo. Not just because he was ruddy awful – although he was – but because Bravo’s signing and Joe Hart’s departure was Pep Guardiola’s first power-play as Manchester City manager. Willy Caballero was City’s No. 1 by February.

Individual achievement of the season: Harry Kane scoring 29 Premier League goals is exceptional, but doing so despite being injured for three months of the season and scoring 21 from January onwards is simply sensational. Three-season wonder.

Biggest disappointment: Pep Guardiola, and Sarah Winterburn says it best: ‘When Manchester City won their first six games of the Premier League season, if felt like they had cheated by bringing in the best manager in world football and giving him significant sums to spend. When Manchester City then failed to win in six games in all competitions, we were the ones who felt cheated. We wanted a Barcelona in blue and got a Manchester-based Arsenal, who looked vulnerable at the back, occasionally thrilling in attack, but ultimately flattered to deceive.’

Dick move of the season: We promise we will stop mentioning it soon, but the fact that Marco Silva is now in negotiations to become Porto’s next manager shows how miscalculated Phil Thompson and Paul Merson’s rant about his appointment by Hull City was. We are often guilty of repeating a point ad infinitum, but this attitude really does have to change.

Best pundit: We love Jamie Carragher at Football365, and we’re not for changing. Honesty and insight from a pundit who isn’t afraid to criticise former colleagues, but whose opinion contains enough forethought that he doesn’t resort to spouting controversy to stay relevant. Unlike some.

Ridiculous statistic of the season: Romelu Lukaku is only the fourth player in Premier League history to reach 80 goals in the competition before turning 24 (after Michael Owen, Robbie Fowler and Wayne Rooney). As if he wasn’t getting a bloody mention.

Metaphor of the season: “He is a big talent but he was a bit wild. It is like when you have a wild horse and you need to put it in a box and domesticate it” – Mauricio Pochettino on Dele Alli. We’ve called the RSPCA.

I'm an inactive @Arsenal fan until wenger leaves. Sorry mate but you're time is up #wengerout #wexit pic.twitter.com/h3FYAaEz3g

Start as you mean to go on of the season: “The bottom of the table is where they’ve been every other year for the past four years, so why would it suddenly change?” – David Moyes sets his sights nice and high in August 2016.

That might come back to haunt you of the season: “I want to be champion. To say before the season starts that the top four is the target? The top four is not the target. We want to play to be champions. If during the season we realise the points difference doesn’t allow us to fight for the title, we are going to establish a new title, and when you can’t be champion the next target is to finish top four. But day one, I don’t want to hide behind a bad season or no Champions League football to say we want to finish top four” – Jose Mourinho, July 24, 2016.

Inadvertent slam of the season: “It is the home you deserve” – West Ham vice-chairman Karren Brady on the club’s new stadium. Bit harsh.

Vote of confidence of the season: “In light of recent speculation, Leicester City Football Club would like to make absolutely clear its unwavering support for its first-team manager Claudio Ranieri” – Leicester City back Claudio Ranieri to the hilt. Sixteen days later, Ranieri had been sacked.

Motivational words of the season: “”eams in our position are signing players for £14million – we are signing players who didn’t play in the Championship. Patrick [Bamford] didn’t play for almost 18 months, so I don’t think it is an amazing improvement. I always said the aim in the transfer window was to improve the squad and, at the moment, we haven’t done that” – Weird that Aitor Karanka didn’t inspire Middlesbrough’s players, isn’t it?

Tedious storyline of the season: Plane banners, in any shape or form. There has never been more ways to express your feelings than in 2017. So stop spending hundreds of pounds on attention-seeking stunts, give the money to charity and go home to think about what you’ve done. If football makes you that angry, take up adult colouring books.

Mark of respect of the season: In his first press conference after Claudio Ranieri had been sacked, Jose Mourinho wore a tracksuit top with the initials ‘CR’ ironed onto the front. This is a man who Mourinho had called Ranieri a “loser” in 2004, and said this about him in 2008: “Ranieri…has the mentality of someone who doesn’t need to win. He is almost 70 years old. He has won a Supercup and another small trophy and he is too old to change his mentality. He’s old and he hasn’t won anything.” Still, he’s got your back Claudio.

The ‘You’ll forget he existed in five years’ time’ of the season: Wayne Shaw, the star of PIEGATE. Or Mike Phelan, the star of…no, I’ve got nothing.

Damning with faint praise: The cheers for Claudio Bravo from Manchester City supporters when he finally saved a shot on target hammered several nails into that coffin.

Dembele of the season: It can only be Denis Dembele, for being a fine referee who upholds the laws of the game. And, more importantly, for being a referee who would meet Keith Hackett’s high expectations.

Moment of the season: Telling far more than a thousand words.

Bradley loves @IAmJermainDefoe he didn't want him to leave today and fell asleep cuddling into him #specialbond #bestfriends pic.twitter.com/sn2symKhdv