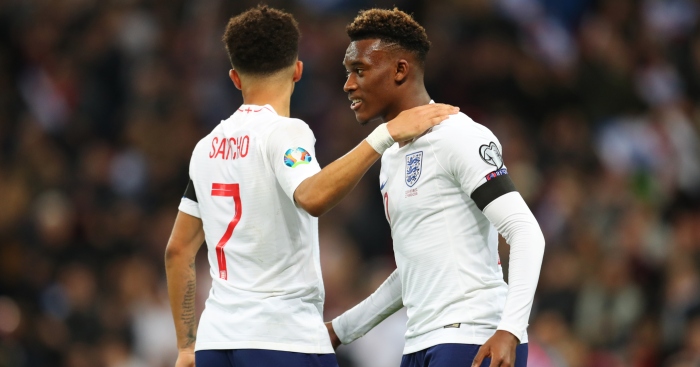 As ever, this represents our estimation of Gareth Southgate’s thoughts. And we feel like we know him well. Numbers in brackets pertain to this ladder from November.

1 (1) Harry Kane
It was ever thus. He now has 22 goals in 37 England games. That’s quite a lot. And the really bloody excellent news is that we could probably (just about) cope without him, as other players have actually STARTED SCORING GOALS. Like that’s actually part of football or something.

2 (6) Raheem Sterling
His time is now. He is a hero, a role model and all of those other things he really should have been all along. Oh and he has scored six goals in his last four England games.

3 (2) Jordan Pickford
Phew. There was talk last week of Pickford being usurped by Tom Heaton for England, but while the Burnley keeper was losing (again) to Leicester, Pickford was sensible and understated in keeping a clean sheet against Chelsea. He was then fuss-free in two England games to stop all that chatter for a month or two at least.

4 (3) John Stones
Missing for these two victories but that does little damage to his standing; he has started every competitive match for which he has been available over the last 18 months. Let’s not worry about the order and just rejoice at the competition.

5 (5) Harry Maguire
Revelled in his status as England’s most senior centre-half in the absence of Stones. It turns out that he is not ‘the weakest link’ after all. Whisper it (f*** it, shout it) but we have genuine options in pretty much every position.

10 goals. 6 points. Job done ✅ See you all in the summer 🏴󠁧󠁢󠁥󠁮󠁧󠁿🦁❤️ pic.twitter.com/FHWuwbgcbz

6 (4) Joe Gomez
And here’s another one. Are we back to those glory days of actually having centre-halves? By God, we are. What happens when all three are fully fit and available? Who knows. Who cares? It never bloody happens anyway.

7 (7) Marcus Rashford
In October I wrote that ‘England’s attacking front three will take some shifting now. And not only because we have literally no other options’, which tells us just how far we have come in the last five months. Rashford (along with Kane and Sterling) is still probably first choice, but Jadon Sancho, Jesse Lingard and Callum Hudson-Odoi give us options, options, options.

8 (10) Jordan Henderson
‘We presume he is still the first-choice partner for Dier in midfield, but both Fabian Delph and Harry Winks would like a word,’ we wrote in November as Henderson missed two famous victories over Spain and Croatia. But against the Czech Republic on Friday he was back. And frankly, he was excellent. And although he did not start against Montenegro, he impressed in a cameo.

That pass from Jordan Henderson, by the way… pic.twitter.com/v2yp20KzX1

9 (12) Ross Barkley
His finest back-to-back games in an England shirt, and he has now undoubtedly moved well ahead of Alli in any race to be the third member of that three-man midfield alongside Henderson and either Declan Rice or…

10 (8) Eric Dier
On the one hand, he has started four consecutive competitive games. On the other, England coped more than fine in his absence and Rice offers genuine competition.

11 (10) Kyle Walker
Talking of genuine competition, Walker is still (just about) ahead of Kieran Trippier, Trent Alexander-Arnold and Aaron Wan-Bissaka, though he will not thank Gareth Southgate if he is stationed behind the callow Callum Hudson-Odoi again. He noticeably improved in a more familiar role behind Sterling.

12 (9) Jesse Lingard
Don’t you be forgetting that he scored in back-to-back internationals in November.

13 (20) Jadon Sancho
One attacking injury to Kane and little Jadon Sancho was the next cab off the rank. We’re feeling a little bit sexy right now…

14 (13) Ben Chilwell
Honestly, Southgate picking Danny Rose against Montenegro has thrown us a little, especially as we said in November he seemed like ‘yesterday’s man’. Oops. But Chilwell started five in a row so we presume that he is still the man in the magic No. 3 jersey.

Oh and he made seven tackles against Montenegro. He is proper.

17 (14) Fabian Delph
Don’t you be forgetting that he was exceptional against Croatia in November, and only injury kept him out of these March qualifiers. Never underestimate one man’s love for Fabian Delph.

18 (18) Dele Alli
‘Right now, he is a squad option rather than a guaranteed starter,’ we wrote in November. He then started two games in March. But starting two games and not making any strides forward is probably worse than not starting at all. And three goals in 35 games for an attacking player is just short of pretty pathetic.

20 (29) Danny Rose
And here is ‘yesterday’s man’ making an appearance actually yesterday. We basically have an awful lot of full-backs and we are buggered if we know where they all stand right now.

The good news? We’re up to 20 and still not depressed. This basically never happens.

21 (17) Kieran Trippier
Excellent in the World Cup but has started just two of eight games since. We think (and this really is based on nothing more than instinct) that he might be still ahead of TAA by a cock hair; there will surely come a point when Southgate cannot just choose them all. That point is coming in June.

22 (22) Callum Wilson
And there’s your final striker. And he is about four billion miles ahead of the competition as it stands.

24 (24) Trent Alexander-Arnold
Yet to start an England game that really matters, which we suspect will work against him when June brings the (Nations League) final reckoning.

25 (15) Harry Winks
Now I am wondering why he was so high in November. Nothing against Harry Winks, but everything seems a little brighter when he is ranked at 25 rather than 15. Did we mention we now have options?

Declan Rice’s declaration for England and Harry Winks’ recent conversion into playing as the deepest midfielder.

England’s long-term Defensive Midfield options have been transformed in a matter of weeks. pic.twitter.com/W7qCEptpTw

26 (NE) Callum Hudson-Odoi
Just 18 and ‘there was a period of this contest when Callum Hudson-Odoi was unplayable’, according to The Guardian. Frankly, we are bored of all the ‘he doesn’t get a chance for Chelsea’ stuff; that’s not our business. What is our business is that we are down to No. bloody 26 and we are still flying with genuinely exciting players.

28 (16) Luke Shaw
The last time he completed 90 minutes for his country, he was in a back four with Chris Smalling, Gary Cahill and Nathaniel Clyne. That’s shorthand for ‘a long time ago’. He is running out of time to force his way back in.

29 (28) Ruben Loftus-Cheek
Named in the England squad again (James Maddison wants a word) but chose the wrong time to withdraw through injury.

30 (RE) James Ward-Prowse
Those wondering ‘why not James Maddison?’ need to think about poor Aidy Boothroyd and his ravaged Under-21s.

31 (RE) Angus Gunn
Leapfrogged Alex McCarthy for both club and country, by our reckoning.

32 (26) Lewis Dunk
He’ll always have that friendly against the USA.

Please tell me how James Maddison doesn’t get into this midfield. pic.twitter.com/ZvPAJv6QaY

34 (38) Aaron Wan-Bissaka
“Aaron Wan-Bissaka is playing very well, and he’s really pushing to be in our squad – there’s no question,” said Gareth Southgate. But for now, he remains in a very strong England Under-21 set-up (though not this week as he is injured).

35 (30) Danny Welbeck
We basically never rule him out.

36 (35) Phil Jones
It’s easy to forget that he actually went to the World Cup.

38 (25) Nat Chalobah
Not even Southgate can justify picking him anymore.

39 (32) Reiss Nelson
Looked so close in the autumn, but the spring has seen him lose his place at Hoffenheim and disappear into the England distance.

40 (37) Conor Coady
Does Southgate doubt him in a back four? That is the only feasible explanation for his continued absence from this England squad.