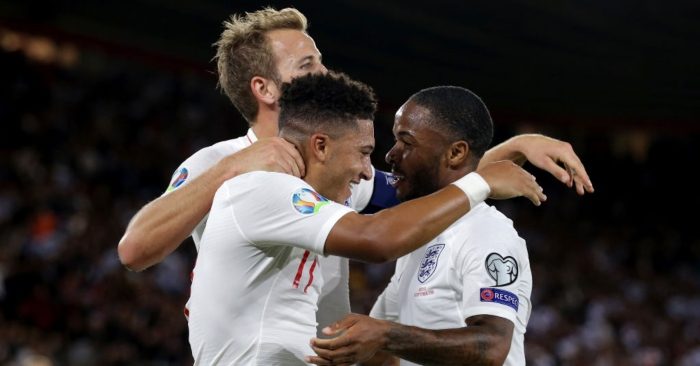 As ever, this represents our estimation of Gareth Southgate’s thoughts. And we feel like we know him well. Numbers in brackets pertain to this ladder from June.

1 (3) Raheem Sterling
We have waited an awful long time for this, but my word he is bloody brilliant right now. Six goals in four qualifying games. Who does that?

2 (1) Harry Kane
Oh, he does that. But for the first time in what feels like forever, Kane is not the first name on the team sheet but the second, a micro-second after the first. “His level of performance is so high that dropping him would be a rare occurrence,” said the boss. It’s a bloody good job as we don’t really have an alternative.

3 (6) Jordan Henderson
Who would do all the shouting and all the running and all the pointing if there was no Henderson? Injury permitting, there seems roughly zero chance of Southgate dropping one of his most trusted lieutenants.

6 (10) Trent Alexander-Arnold
Bizarrely, that rise does not mean we think he is England’s first-choice right-back – if there indeed is such a thing – but that his squad place is the most secure. Since his call-up in early June of 2018, his name has not been missing from a single England squad. He’s young; he plays every week for this great Liverpool side; he is a shoo-in.

7 (7) Marcus Rashford
As we said in June: ‘We’re not entirely convinced that he starts if everyone is fit (it probably comes down to a straight battle between him and Jadon Sancho) but we would not be surprised if he makes every England squad for the next decade and more.’ Nailed it.

8 (14) Jadon Sancho
Right now, his ability to play on the right – thus allowing Sterling to play off his favoured left side – and his finishing prowess combine to make him the likely third member of a quite extraordinary front three. Do Dortmund have any spare English centre-halves lying around?

Jadon Sancho has now been directly involved in 7 goals (4⚽️ & 3🅰️) in his last 4 starts in all competitions.

9 (19) Declan Rice
As I wrote on Tuesday night: ‘Is he the answer yet? We’re not really sure. Is he the best answer we can currently give? Probably. He definitely makes us feel a little less queasy than Eric Dier and right now, that will simply have to do.’ And most importantly for this ladder, Southgate is clearly invested in his improvement.

10 (5) Joe Gomez
We might have to nobble Joel Matip to get him enough games for Liverpool to make him undroppable for England. We remember Switzerland in June, when Gomez and Maguire looked – whisper it – calm. Can you be nostalgic for a time less than three months ago?

11 (8) Ross Barkley
Definitely the most vulnerable of the England midfield but he has quietly started seven of their last ten games. We want more from him, but there is absolutely no doubt that he is in Southgate’s good books. We might crave Mason Mount but right now, he bows to his Chelsea teammate.

12 (17) Ben Chilwell
Really, really awful against the Dutch in the summer but it was telling that Chilwell was picked by Southgate for what he knew would be the harder game against Kosovo. That was his seventh start in 11 games since he was drafted in to replace Ashley Young last September. He is here to stay.

13 (9) John Stones
Also really, really awful against the Dutch in the summer but the horror of seeing Michael Keane start back-to-back games in an England shirt has softened our hearts once again to Stones, who should at least play more for Manchester City after the loss of Aymeric Laporte to injury.

Random observation on a dearth of England central defenders: since Phil Jones made his senior England debut (2011), only 2 other centre-halves have emerged to gain more than 10 England caps – John Stones and Harry Maguire. Two ‘good’ centre-halves in 8 years.

14 (42) Mason Mount
That June position shows just how surprising Mount’s rise to prominence has been. We had James Maddison so very far ahead of Mount among the younger candidates for a No. 10 role that does not really exist in this England side.

15 (13) Danny Rose
Had a poor start to the season for Tottenham but retained his England squad place because left-back options are a little thin on the ground. If he is replaced by Ryan Sessegnon for club, the same will likely happen for country.

16 (RE) Nick Pope
We probably forgot about him in June. He has reminded us about his prowess this season.

17 (12) Kyle Walker
Reports suggest that Southgate told Walker that he is still his first-choice right-back despite being dropped from this particular squad. There is certainly some logic to the theory that the England boss wanted to see Aaron Wan-Bissaka up close and Walker – who will be 30 when Euro 2020 rolls around – was the temporary fall guy.

18 (20) Michael Keane
England’s fourth-choice centre-half. And we never want to see him in an England shirt again.

Michael Keane, what are you doing? 🤦‍♂️

19 (25) Alex Oxlade-Chamberlain
Almost 18 months after his 32nd England cap came his 33rd against Bulgaria. Now we just need him to play more than a bit-part role for Liverpool and work on his pointing/shouting so he can deputise for Henderson.

20 (21) Harry Winks
‘He really must edge out Fabian Delph as it stands. Mustn’t he? Surely?’ is what we asked in June. He did indeed edge out Delph, but Winks will be gutted that he did not play a single minute across two qualifying games. Even though he is the Premier League’s pass master.

21 (15) Jesse Lingard
You can mutter and moan all you like, but as Southgate says: “When you’re selecting a team, there’s half an eye on club form but also I don’t remember a game where he’s been really poor for us.” We – and the likes of Maddison – probably have to wait for him to have a poor game.

De Bruyne has more assists in 30 minutes than Lingard has in his last 35 matches. That’s almost a season’s worth LOL.

22 (22) Callum Wilson
Because the squad needs another striker and Wilson is just ahead of Tammy Abraham until the Chelsea man scores against something other than Championship defences.

24 (16) James Maddison
‘Come September, he will belong to Southgate.’ Except Southgate won’t really want him. Maybe he only saw the first half of that game against Chelsea.

25 (30) Kieran Trippier
‘We would be surprised to see him in an England shirt again,’ we said. In our defence, who bloody knew he was going to end up playing under one of the great defensive coaches?

Kieran Trippier has attempted more tackles than any other Atleti player this season (7) and he’s won 100% of them.

26 (29) Aaron Wan-Bissaka
A £50m full-back should probably be higher but Southgate will want to see those spider legs up close. And memories of the England Under-21 sh*t-show of the summer are still fresh.

28 (35) Tammy Abraham
In June: ‘He just needs to play Premier League football and score eight or nine goals to be in contention. Yes, we have so few strikers.’

In September: He is well on his way.

29 (24) Dele Alli
In June: ‘We are fast approaching the point where Alli cannot justify an England squad place, especially after that Champions League final performance.’

In September: We got there.

If Dele Alli gets back to 17/18 form he can take Mount’s place on the bench!

30 (27) Ruben Loftus-Cheek
Needs to get fit and establish himself in that Chelsea side. Then we should see a climb.

31 (31) Callum Hudson-Odoi
See above. Right now, he is probably England’s fourth-choice winger; that won’t get him on the plane.

32 (26) Fabian Delph
That Southgate did not include a single outfield player over 30 in his current squad does not bode well for Delph, though you should never underestimate that man’s resilience; we would not be surprised to see him start the first game of Euro 2020 as captain and mascot.

34 (NE) Tyrone Mings
Leapfrogged James Tarkowski to become England’s fifth-choice centre-half. Must be all those clearances.

35 (33) Luke Shaw
It’s been a year since he last played for England. In the meantime, he became Manchester United’s Player of the Season. Draw your own conclusions.

39 (38) Phil Foden
“Well, he’s up against Kevin De Bruyne, Bernardo Silva, Ilkay Gundogan and David Silva so I’ve to respect Manchester City and their decisions,” says Southgate. And so we wait. And he waits.

England U21 rack up the passes as Phil Foden opens the scoring. pic.twitter.com/mEa27hnLM2

40 (18) Jack Butland
All those English keepers in the Premier League have really p***ed on Jack’s chips.