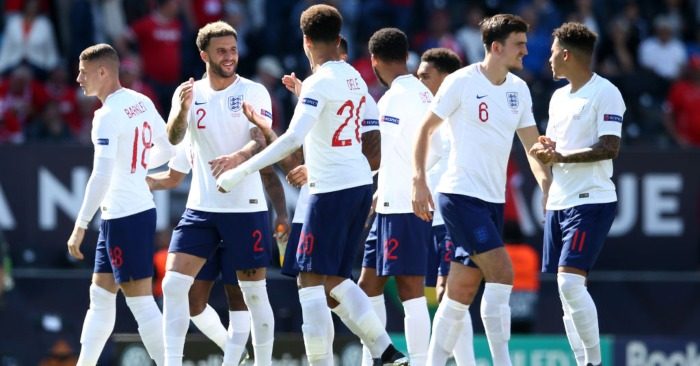 As ever, this represents our estimation of Gareth Southgate’s thoughts. And we feel like we know him well. Numbers in brackets pertain to this ladder from March, when we were dreaming of Nations League victory. Oh and it’s worth noting that we only got one name wrong of the 23 players we tipped for the Nations League squad.

1 (1) Harry Kane
Even though some of us suspect that England’s only real chance of beating the world’s true elite is to play a fluid, rapid front three with no Harry Kane, there is bugger all chance of that happening for as long as he is not actually broken. The England captain remains the first name on any England team sheet (as long as it’s not five days after he has lost a Champions League final).

2 (3) Jordan Pickford
He still gives us the heebie-jeebies but you cannot argue with the best goalkeeper in the Nations League finals. Especially when the only other options are Jack Butland and Tom Heaton. Wouldn’t it be lovely if Dean Henderson and/or Angus Gunn had a full season in the Premier League and turned out to be proper good and calm and stuff?

3 (2) Raheem Sterling
It was undoubtedly his season, but the truth is that he looked a bit knackered against Switzerland; playing 240 minutes in four days can do that to a chap.

4 (5) Harry Maguire
Three different centre-half partners in his last three England games and you have to say that he looked the least stable when paired with John Stones. Maguire and the man below him on this list must now be England’s first-choice centre-halves. And to think that a year ago, we were asking whether him or Gary Cahill would play at the World Cup. Oh and his head is f***ing massive.

5 (6) Joe Gomez
‘What happens when all three are fully fit and available? Who knows. Who cares? It never bloody happens anyway,’ we said in March. Well it did happen and Gomez played with Maguire for the first time in a pair. It went well.

6 (8) Jordan Henderson
Improved his standing in near-absentia, with the Champions League winner playing just 44 minutes across the two games in Portugal and visibly improving England when he replaced Fabian Delph against the Netherlands. What a hero.

7 (7) Marcus Rashford
He made and scored the only goal England managed to score over 240 minutes of football. We’re not entirely convinced that he starts if everyone is fit (it probably comes down to a straight battle between him and Jadon Sancho) but we would not be surprised if he makes every England squad for the next decade and more.

8 (9) Ross Barkley
Quietly established himself as part of this post-World Cup England side. The Chelsea midfielder is one of only seven outfield players to notch over 500 minutes of England football since the tournament in Russia. The others are Maguire, Kane, Sterling, Kyle Walker, Eric Dier and Ben Chilwell. We’re so lacking in creative midfield options that his inclusion is currently a no-brainer.

Ross Barkley is completely different for England, when given trust and freedom he excels. Brilliant to watch really

9 (4) John Stones
Awful against the Netherlands and right now looks as though he needs a summer to get his head straight. He goes on holiday as England’s third-choice centre-half, a year after he went to the World Cup as the fulcrum of that defence.

10 (24) Trent Alexander-Arnold
It now looks a tad bizarre that he was 24 in the last ladder, but we did write this about Kieran Trippier: ‘We think (and this really is based on nothing more than instinct) that he might be still ahead of TAA by a cock hair; there will surely come a point when Southgate cannot just choose them all. That point is coming in June.’ So June did come and TAA got the nod. And he made more chances in one game (7) than any other England player across both matches.

Martin Tyler: “is TAA good enough defensively to play international football at RB in a four?”

Well, Martin, it’s hard to know. I don’t know whether him playing for a team who have reached consecutive CL finals qualifies him to play against San Marino and Lichtenstein

11 (10) Eric Dier
We cannot pretend to be happy that he is England’s first-choice defensive midfielder/tallest dwarf, but he at least takes a fine penalty.

12 (11) Kyle Walker
Not dropped as far as some would demand; we will hold fire on that until Walker is actually ousted for something other than a third-place play-off.

13 (20) Danny Rose
Frankly looked about 4.27 times better than Ben Chilwell on this Portuguese jaunt. Perhaps a timely reminder that you don’t tend to start Champions League finals if you are a bit sh*t (unless you are Kieran Tripper or Dele…actually, scratch that).

What we do know is that one of England’s oldest players is not done yet.

If Tottenham sell Danny Rose this summer, they will find it very hard to replace him with a better left-back.

14 (13) Jadon Sancho
Should have scored his first England goal against the Netherlands. It doesn’t mean he is any less exciting, mind. We very much like that we have wide options of Sterling, Rashford, Sancho and Hudson-Odoi going forward. Can we play without central midfielders and just play wide players?

16 (33) James Maddison
One goal (from a penalty) in 240 minutes of football perfectly illustrated that England has a major creativity problem. Who better to solve that creativity problem than the Englishman that creates more chances than any other (by some margin)? Come September, he will belong to Southgate.

17 (14) Ben Chilwell
Appalling against the Dutch on Thursday night. Did we crown him too soon?

Watched England last night and I have to say that if we are relying on the likes of Alli, Lingard, Delph, Barkley & Henderson then we're well fucked. Walker, Chilwell & Maguire who I'm a fan of had their worst game to date. I'm sorry but I cannot see where Southgate is going.

19 (15) Declan Rice
Looked a long, long way short of the Dutch midfield on Thursday night, making us think that he is not (yet) the answer to our midfield woes. It’s one thing looking good against Montenegro and quite another when you face the elite of Europe. Would the England defence have looked so nervous if they had better players in front of them who were giving them options rather than hurriedly lobbing them a hot potato?

Declan Rice was the root of the problem all night. Stones and maguire couldn’t play through him because he simply just passed it back to them. So making them nervous and not knowing what to do with ball. Added to that let players run off him all night. He was simply dreadful ⚽️

20 (16) Michael Keane
England’s fourth-choice centre-half. Take that James Tarkowski and Lewis Dunk; you have been served.

21 (25) Harry Winks
“He is a player that we have very much been waiting for in that kind of position,” said England’s assistant manager, Steve Holland. “Someone who is comfortable to turn and connect the play when we are working through the offensive phases.”

We feel like we have been here before with Jack Wilshere so we refuse to get excited until Winks is fit enough to be included in more than two England squads in a season. But he really must edge out Fabian Delph as it stands. Mustn’t he? Surely?

22 (22) Callum Wilson
Because the squad needs another striker and nobody else is currently making a case. The test will come if Tammy Abraham plays regular Premier League football next season.

Dele Alli was awful for the 80 minutes he played. He's lost his way and needs to have a think this summer.

25 (RE) Alex Oxlade-Chamberlain
The Ox with a first full Jurgen Klopp pre-season under his belt? That’s enough to get some juices flowing. England have been sorely lacking energy and dynamism in midfield, and we cannot kid ourselves any longer that RLC is anything other than a poor man’s AOC.

26 (17) Fabian Delph
We don’t do this without due thought, as Delph has just started back-to-back England games. But surely this England squad will only carry 30-plus outfield players if they are far, far better than Delph. We do like him but he should only really be an option when the younger alternatives are crocked. What a story this is, though…

He placed this bet when Fabian Delph was playing for #LUFC in League One. 🤯

27 (29) Ruben Loftus-Cheek
Another player involved in just two England squads this season. It turns out that we do have England midfielders, they just don’t play enough football. Loftus-Cheek should be back in England contention by the time Euro 2020 rolls around again, and we do know Southgate is a massive fan.

28 (NE) Dean Henderson
Promotion with Sheffield United, a European Under-21 Championship this summer and the chance of at least one season of Premier League football should mean that Marcus Bettinelli is just an answer in a particularly tricky quiz in years to come.

29 (34) Aaron Wan-Bissaka
Crystal Palace reportedly want £60m for AWB, who is yet to be named in an England squad. That is likely to change in September, whether he is then a Palace or Manchester United player.

30 (21) Kieran Trippier
We would be surprised to see him in an England shirt again.

Despite a poor performance and a player not at his best this season, a tearful Kieran Trippier went to console the Tottenham Hotspur fans who remained, reaching out to each one that he passed.

It looked like a sincere goodbye from the Spurs defender.

31 (26) Callum Hudson-Odoi
We would be surprised to never see him in an England shirt again.

33 (28) Luke Shaw
The last time the Manchester United Player of the Year completed 90 minutes for his country, he was in a back four with Chris Smalling, Gary Cahill and Nathaniel Clyne.

34 (30) James Ward-Prowse
Made the initial Nations League squad but missed the chance to add to his brace of caps.

35 (RE) Tammy Abraham
He just needs to play Premier League football and score eight or nine goals to be in contention. Yes, we have so few strikers.

36 (31) Angus Gunn
Lost his place to Henderson at Under-21 level; a lot now depends on whether Ralph Hasenhuttl buys another keeper this summer.

38 (42) Phil Foden
Can he get just enough football at Manchester City to force his way in?

39 (RE) Ryan Sessegnon
A summer move to Tottenham will see him fly up this ladder (health and safety permitting).

40 (35) Danny Welbeck
We don’t ever like to rule him out completely.