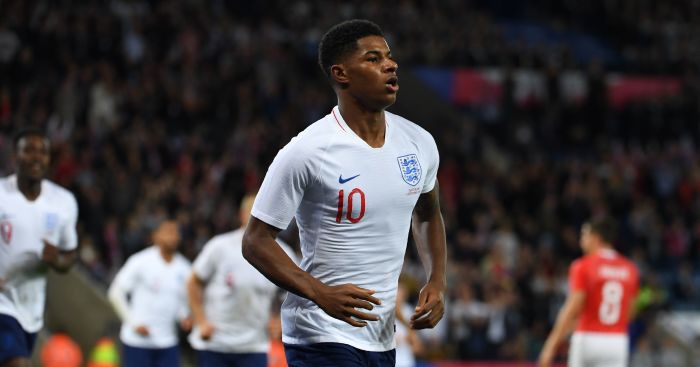 As ever, this represents our estimation of Gareth Southgate’s thoughts.  And we feel like we know him well. Numbers in brackets pertain to this ladder from just after the World Cup

2 (2) Jordan Pickford
Get the rave on. There is no competition.

Leicester fans will win no awards for their imaginative chant about the Foxes’ Slabhead centre-half, but the man himself has played himself into a situation where Gareth Southgate’s three-man defence is Maguire + Stones + AN Other (probably Gomez). “I do pinch myself,” he says. Yes. So do we.

4 (3) John Stones
In our perfect Premier League XI and very much in Southgate’s England XI. Against Switzerland he delivered the full John Stones – for every block to prevent a goal there is a dither under a high ball to present another chance. The class:cock-up ratio needs some tweaking.

5 (6) Kieran Trippier
Appears to have nailed that right wing-back slot, a matter of months after some speculated that he might even miss out on a World Cup spot after the emergence of Trent Alexander-Arnold. His presence in the England team to face Spain confirmed his standing.

6 (16) Marcus Rashford
This looks and feels odd, but a striker who scores in both England games of an international break after the near-retirement of a rival footballer has to be a high climber. Jamie Carragher thinks he should join Everton. But then he would.

7 (7) Jesse Lingard
Far, far more assured of his place in Southgate’s XI than Dele Alli, and it is telling that he was the man called off the bench when Ruben Loftus-Cheek was struggling against Switzerland. It helps that he is one of just a handful of England players who are – you know – playing actual football.

8 (5) Kyle Walker
Hmmm. Is it telling that he was the only member of England’s core World Cup XI who was a) in the squad and b) not in the first-choice England side that played Spain on Saturday? Having been reluctantly converted to centre-half, has he been irretrievably replaced at right wing-back and now also in danger of being replaced at centre-half by an actual centre-half? It seems cruel. We don’t want to rub salt in stinging wounds so for now we will keep him just ahead of…

9 (21) Joe Gomez
‘If he plays for Liverpool, he will be in Southgate’s plans as Gary Cahill and Phil Jones step aside. And quite possibly fall over,’ is what I wrote in July. Sometimes, I know what I am doing.

11 (8) Raheem Sterling
‘We would really quite like another actual striker to push themselves forward in the next two years, please,’ I wrote. And Marcus Rashford duly delivered while Raheem Sterling’s cause has been weakened in absentia.

12 (9) Alex Oxlade-Chamberlain
Unlikely to play much – if any – football this season, and yet we still believe he is a better fit for England’s midfield three than the wasteful and out-of-sorts Dele Alli.

13 (34) Luke Shaw
‘Manchester United are not buying another left-back this summer so there is half a chance. Surely.’

It turns out there was more than half a chance. When fit, there is no better English left-back. Get well soon, Luke.

14 (17) Danny Rose
This fella is pretty good too. Surprisingly picked for Tottenham in their victory over Manchester United and now England’s Man of the Match in defeat to Spain. The days of Ryan Bertrand as England’s first-choice left-back now feel an awful long time ago.

15 (11) Dele Alli
Ghosted through another 90 minutes for England on Saturday. This formation simply does not fit Alli, as explained by Daniel Storey.

16 (13) Eric Dier
What does he actually do? A lot of watching and pointing, that’s what. England need more. Jesus, we really do have a problem with our central midfield.

17 (15) Trent Alexander-Arnold
Very much in the plans of both club and country. Ludicrously, he is still only 19. And England really should be thanking Liverpool, not blaming them for letting Dominic Solanke rot.

19 (12) Ruben Loftus-Cheek
He played. He wasn’t very good. Nobody was surprised as he is literally playing no football this season. #prayforRuben

20 (24) Fabian Delph
Yet to play a single minute for Manchester City this season and yet he played against Switzerland. We cannot even pretend to understand this sh*t anymore.

21 (32) Danny Welbeck
I have made my feelings on this pretty clear. But I am not Gareth Southgate. The pool is shallow but faced with the choice of Welbeck, Callum Wilson or Troy Deeney, the boss plumped for Dat Guy over Dem Other Guys.

22 (25) Phil Jones
“He’s a very good player and a good age – and he can be a part of what we want to do,” said Southgate after a tournament that only really served to expose Jones’ failings. Currently injured (of course) but he is still better than James Tarkowski.

23 (30) Nick Pope
We are presuming he is still England’s third-choice keeper. Nobody cares barring him, Alex McCarthy and Marcus Bettinelli.

24 (31) Adam Lallana
‘Already 30 and you wonder how much football he could possibly play for Liverpool now they have added Naby Keita and Fabinho to their ranks,’ is what I wrote in July.

It turns out he cannot possibly play much football at all and yet still get an England call-up. That is how much we are desperate for some deftness of touch.

25 (26) James Tarkowski
We remain unconvinced that Tarkowski is anywhere near England class. We await Alfie Mawson playing more football at Fulham or the cataracts falling from Southgate’s eyes the next time he watches Jamaal Lascelles.

26 (20) Nat Chalobah
His first battle is to get in that all-conquering Watford side. His second is to get in this all-frustrating England side. But the good news is that he was name-checked by Southgate when he named his latest squad.

30 (33) Mason Mount
He scored on his England Under-21 debut and is at least playing regular football for Derby County. We know Southgate likes him because he was training with England prior to the World Cup.

31 (18) Lewis Cook
We said: ‘On Southgate’s World Cup stand-by list and very much a part of England’s future even before he captained the Under-21s to a third successive Toulon victory. He is pretty much the only member of that squad guaranteed Premier League football next season.’

How stupid do we feel now? He needs games for Bournemouth and quick.

32 (27) Jack Wilshere
We said: ‘Because a fit Jack Wilshere playing for a half-decent West Ham side has a fighting chance.’

How stupid do we feel now? As if West Ham were ever going to be half-decent…

33 (14) Ryan Sessegnon
He has now lost his place in the Fulham team. To be fair, we didn’t see them signing Andre Schurrle. He’s been quite good.

35 (NE) Demarai Gray
Called up ahead of his Leicester and England Under-21 teammate James Maddison. Small victories and all that.

38 (NE) Callum Wilson
Southgate claims he will “continue to monitor” Callum Wilson. Surely the semi-retirement of Jamie Vardy was exactly the right time to take a much closer look?

40 (NE) Marcus Bettinelli
Only Southgate could lose several attacking players and call up another goalkeeper.