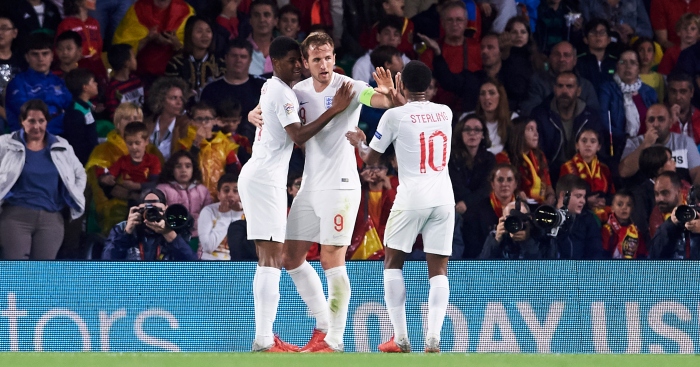 As ever, this represents our estimation of Gareth Southgate’s thoughts. And we feel like we know him well. Numbers in brackets pertain to this ladder from last month.

1 (1) Harry Kane
A striker who has not scored in seven international games and yet remains No. 1? It can only be Harry Kane and England. For context, here’s a list of the top English scorers in the Premier League in 2018: Harry Kane 17, Jamie Vardy 14, Glenn Murray 12, Raheem Sterling 9, Ashley Barnes 8, Callum Wilson 7.

We have now reached 1,000 signatures in our attempts to put Harry Maguire Riding An Inflatable Unicorn on the new £50 note. Please keep signing and sharing, we cannot risk a flippant suggestion like Margaret Thatcher appearing on our currency.https://t.co/3a78DO1OvS

But mostly he is here for the unicorn bank note.

3 (4) John Stones
Suddenly we have options again at centre-half. Well, three very good – if occasionally a tad scary – options. Stones was excellent against Croatia on Friday night on what was his 17th England start in the last 18 games for which he has been available. Southgate clearly intends to build this new-look four-man defence around the skittish Maguire and Stones, though they do have some competition…

4 (9) Joe Gomez
Still third choice of this triumvirate but there is now a very clear gap between them and whoever else makes up the numbers at centre-half, whether that be Phil Jones, James Tarkowski, Lewis Dunk, Michael Keane or Alfie Mawson. So as long as we only ever lose a maximum of one centre-half to injury or suspension, we’ll be reet.

5 (2) Jordan Pickford
Just too sodding busy for my liking. Can he just be calm for 90 minutes? He is lucky there is no real competition.

Jordan Pickford is so good so much of the time, but about 10% of the time he’s like what I imagine Phil Jones would be if he was a goalie.

6 (11) Raheem Sterling
His best performance in an England shirt? Quite possibly. Way to end that goal drought, fella. Now go buy your mum a house and yourself a Greggs sandwich.

7 (6) Marcus Rashford
Chances missed and questions asked on Friday night were answered by Monday. England’s attacking front three will take some shifting now. And not only because we have literally no other options.

8 (8) Kyle Walker
If Southgate is serious about switching back to a 4-3-3, then the Premier League’s best left-back regains his place without question. “It’s a good position to be in, you’d like that competition in every area of the field, frankly,” said the manager when talking about Walker v Trippier v TAA at right-back. But right now, Walker wins at a gallop.

9 (16) Eric Dier
Another beneficiary of the switch to a 4-3-3. We may not quite agree with Sam Allardyce (because it’s mental) about Dier being the equal of Sergio Busquets, but he was bloody excellent against Spain. And that slide tackle…

And Eric Dier flattening Sergio Ramos was the catalyst. We may look back in 20 years time on that tackle as one of the most important ever made.

10 (10) Jordan Henderson
‘Looked lost against Spain, but any central midfielder left on his own to cope against Spain would look a little lost’ is what I wrote last month. Southgate did Dier a solid by giving him help from Harry Winks against the same opposition, but a famous and fabulous victory in his absence really does not reflect well on Henderson.

11 (7) Jesse Lingard
Missed out on a famous victory but the encouraging news for Lingard is that Ross Barkley did nothing that screams ‘pick me’. And the lack of cover for Rashford and Sterling out wide means Lingard becomes an underwhelming but very handy squad option for country as well as club.

12 (5) Kieran Trippier
I wrote last month: ‘Appears to have nailed that right wing-back slot, a matter of months after some speculated that he might even miss out on a World Cup spot after the emergence of Trent Alexander-Arnold. His presence in the England team to face Spain confirmed his standing.’ Sorry. I did not foresee Southgate changing England’s formation and thus very quickly making Trippier his second-choice right-back.

13 (39) Harry Winks
He needed football. He got football. And then Henderson got himself suspended and Winks stepped forward to remind us that England do indeed have a different kind of central midfielder. Now to stay fit, young man.

We know where the headlines will rightly go but do not overlook the contributions here of Jordan Pickford, Joe Gomez and Harry Winks; Dele Alli has a fight on his hands to get back in the team for club and country.

14 (13) Luke Shaw
We presume he is still England’s first-choice left-back (because he is England’s best left-back), even if the order has changed behind him.

15 (18) Jack Butland
England’s pretty distant No. 2. The good news for him is that playing in the Championship has not remotely altered his prospects.

16 (41) Ross Barkley
Right back in the mix. He’s no Paul Gascoigne but those comparisons were never anything but incredibly unhelpful. He showed his worth against Spain even if he was maddeningly conservative against Croatia. The good news is that he finally looks like he might be vaguely in control of his own limbs.

17 (15) Dele Alli
Ghosted through far too many games for England to be missed when he is not there.

18 (27) Ben Chilwell
Obviously professional footballers do not wish ill on each other, but how he must have whooped with delight (and shat himself a tiny bit) when he realised that he was England’s only fit left-back. He has been magnificent, as predicted by my brother after just a few minutes of his remarkable loan spell at Huddersfield three years ago.

19 (12) Alex Oxlade-Chamberlain
Unlikely to play much – if any – football this season, and yet England’s dearth of front-foot central midfielders keeps him in Southgate’s thoughts.

20 (26) Nat Chalobah
The manager loves him so much that playing just four minutes of Premier League football this season is no bar to him making his England debut.

Chalobah overhead kick clearance. What a player. He's playing like it's FIFA. MOTM performance from the Watford legend

21 (25) James Tarkowski
Initially named in this squad as England’s fourth-choice centre-back so we will take that as quite a sizeable clue. As we said above, the gap is a helluva large one.

22 (21) Danny Welbeck
Clinging the hell on. And if Southgate is not picking the likes of Callum Wilson now, we’re not sure he ever will.

23 (28) Alex McCarthy
We cannot pretend we know this for sure, but he is at least playing Premier League football.

24 (14) Danny Rose
Bizarrely not playing in the Champions League with Tottenham, pulled out of this England squad and then watched Ben Chilwell be all kinds of excellent against Croatia and Spain. Not a good little spell for Rose.

25 (17) Trent Alexander-Arnold
A switch of formation relegates TAA from second-choice wing-back to third-choice right-back. It did not help his cause that Jurgen Klopp took him out of the Liverpool firing line after a nightmare 90 minutes against Napoli. But England’s full-back positions look very healthy indeed.

26 (44) Jadon Sancho
Oh hello there, foreign-based England international Jadon Sancho. The foot is in the door (and going past the full-back).

Jadon Sancho really is the new Ribery. Classic wide player that can dribble both inside & outside and put final passes on a plate for the strikers.

27 (23) Nick Pope
Faces a battle to get fit before another to dislodge Joe Hart at Burnley and then another to oust Alex McCarthy at international level.

28 (36) James Maddison
No English player has created more chances in the Premier League this season. When creativity is at a premium, that has to count for something.

29 (30) Mason Mount
Even if it’s just at Championship level, playing actual football quite well really is an excellent idea in 2018.

30 (19) Ruben Loftus-Cheek
Just a few months after featuring heavily at the World Cup, he has been placed gently on the scrapheap. He needs games. Which probably means a loan in January.

Hands up if you genuinely forgot Adam Lallana even existed ✋ #LFC

32 (20) Fabian Delph
‘Yet to play a single minute for Manchester City this season and yet he played against Switzerland. We cannot even pretend to understand this sh*t anymore,’ is what I wrote this month. Surely England’s future does not feature an ex-midfielder who occasionally plays at left-back?

33 (22) Phil Jones
He has played in one Premier League game this season.

34 (40) Marcus Bettinelli
We have now reached the stage where Southgate calls up every England goalkeeper he can think of.

35 (RE) Lewis Dunk
And that completes the England squad from the Croatia and Spain games.

Great stuff so far, but I won't be satisfied that this is a true stuffing until I hear/see the words "Lewis Dunk" and "gets in on the act"

36 (29) Will Hughes
Watford’s form dipped just at the wrong time for Hughes, who was leapfrogged by Barkley. Awkward.

37 (31) Lewis Cook
Banished back to the England Under-21s, which feels just about right.

39 (38) Callum Wilson
Nobody has missed more Big Chances in the Premier League this season. Not even Gabriel Jesus.

40 (32) Jack Wilshere
When he starts in a Premier League win for West Ham, we’ll talk.