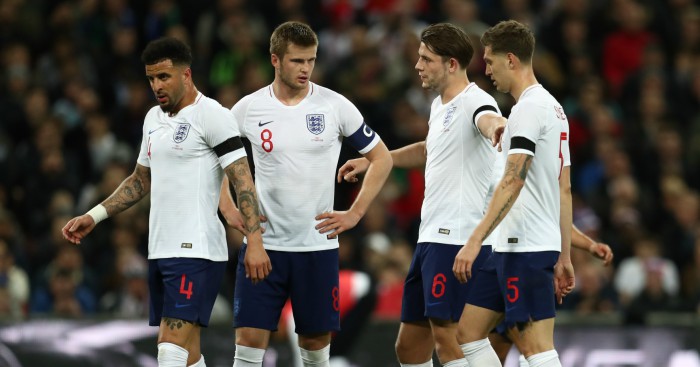 It’s been over four months since we last did a ladder so there will be changes. As ever, these are not our thoughts, but our estimations of Gareth Southgate’s thoughts were he to pick a squad for Russia now. Go…

1 (1) Harry Kane
He’s still sitting atop this ladder as England’s only genuine world-class player, but the gap has narrowed; he is no longer a murky spot on the horizon. England not only scored but thrived in his absence against the Netherlands and Italy. And we will continue to voice the unpopular opinion that Jamie Vardy is a better option when chances are at a premium against a high press. But it would take a bloody brave manager to make that call. Gareth Southgate is ballsier than we ever imagined but his testicles are surely not that hefty?

2 (4) Kyle Walker
‘Playing so bloody excellently for Manchester City that he is surely England’s first-choice wing-back by some distance’, I wrote in November. Little did I know that Southgate would move Walker into his three-man defence to bolster both his right side and his midfield in a moment of genius that we can only describe as witchcraft.

3 (7) Raheem Sterling
We really could not be happier. Daniel Storey said it all in the player ratings from the Italy game. F*** you tabloid scum and neanderthals who tried to break him. Not just the most prolific young goalscorer in Europe but England’s most exciting attacking player.

4 (2) John Stones
So he still scares the sh*t out of us sometimes, but he has started England’s last six games so Southgate clearly intends to build his defence around Stones, and particularly his partnership with Walker. That three of England’s top four players are from the champions-elect is exactly how it should be; Pep Guardiola is one of Southgate’s greatest talents.

5 (14) Jamie Vardy
The top English Premier League scorers this season: Kane (24), Sterling (15), Vardy (14), Glenn Murray (11). What more evidence do you need? Oh, you want to know that Vardy has now scored five of his seven international goals against Germany, Netherlands, Wales, Spain and Italy, do you?

Really unpopular opinion: I think England might be better at the World Cup with Jamie Vardy starting as the striker over Harry Kane.

6 (3) Eric Dier
‘He will eventually be found out against the best teams in the world, but that’s hardly a cause for huge criticism when he doesn’t play for one of the best,’ wrote Storey after one of Dier’s better performances against Italy. He is exactly the kind of player Southgate wants and needs, so he remains high on this list. But crucially not so high that it makes us weep.

7 (24) Jesse Lingard
Most importantly, he brings the banter. But he has also emerged as England’s first option for the most advanced of the central midfielders, moving ahead of Dele Alli in that particular race that involves rather a lot of running and a speed of thought and deftness of touch that we considered beyond him. We are happy to say we were as wrong on Lingard as we were right on Sterling. He is our ladder’s highest climber.

Jesse Lingard scores on the big stage, comes up with mad celebrations, interacts with young football fans and is a homegrown talent.

Yet there’s people in this country that despise him/don’t rate him simply because he’s living the life they couldn’t.

8 (5) Dele Alli
There is absolutely no doubt that Alli’s stock has fallen somewhat; no list of Premier League assist-makers that puts him level with David Silva should convince you that this has been anything other than a so-so season. His World Cup squad place is assured, but right now England’s strongest starting XI does not feature Alli. And we are absolutely fine with that.

9 (6) Marcus Rashford
‘‘Is it a case of him or Raheem Sterling to start with Dele Alli and Harry Kane?’ asked Daniel Storey after the Brazil game; yes, and right now Rashford probably just edges it,’ is what I wrote back in November. But since then Rashford has lost (and then possibly regained) his place at Manchester United; so he goes to Russia as England’s third-choice striker rather than first-choice wide forward. Suddenly England’s bench is starting to look real sexy.

10 (16) Jordan Pickford
Excellent against Germany and then against the Netherlands. He is already England’s fourth best goalkeeper since David Seaman and he looks about 13.

11 (11) Jordan Henderson
‘The water-carrier suffered a couple of spills but, by the end, had completed a thankless task admirably,’ we wrote after the Netherlands game. Nobody will remember his performance and yet it was one of his better outings in an England shirt; that’s not a great look for somebody with 38 caps who is probably first-choice England captain. But such is England’s lack of central midfield options, we have to swallow our lack of pride.

12 (15) Jack Butland
As Ian Watson wrote on Tuesday: ‘His seventh cap comes against the same opposition as his first, six years later, due to some rotten luck with injuries. Yet to fully regain the form that made him appear a dead cert to inherit Hart’s gloves.’ Right now Pickford is probably a smidgen ahead but he will at least go to Russia.

13 (18) Kieran Trippier
The second Kyle Walker becomes England’s third centre-back, Trippier is on the plane as England’s first-choice wing-back. Even if the Walker experiment really is just an experiment, Trippier’s place is now assured. It helps him enormously that Nathaniel Clyne will make his comeback too late to be considered for Russia. Confession: We’re still not convinced he is any good.

14 (9) Adam Lallana
The fact that Lallana was in this squad despite barely playing for Liverpool illustrates just how important he is to England as one of the few players who does not need pace to be dangerous. He looked rusty against Italy but that is because he is rusty. He must somehow now play enough minutes for Liverpool to unrust; the good news is that Jurgen Klopp is on board with the plan. “Adam has had probably the most difficult season of his career so far but he is still a top three or four player for England. 100%,” said Klopp. Make that top 14.

Adam Lallana has been fouled about 60 times in his five minutes on the pitch. Fair play.

15 (13) Phil Jones
You will have likely forgotten but we are here to remind you that Southgate considers Phil Jones to be the best English centre-half. If he can get and stay fit, he will be going to Russia. Or at least this bloke will…

16 (26) Ashley Young
As I wrote in November when I was not yet convinced he would go: ‘If you are a regular English starter for a top-six Premier League club, you will probably be in the England squad. And he is usefully versatile. And unusually – in this group – old and experienced.’ Now I am convinced.

17 (21) Joe Gomez
Excellent at centre-half against Brazil in November, and being excellent at centre-half against Brazil in November earned him a start against the Netherlands in March, regardless of his battle for minutes as a right-back at Liverpool. It’s worth noting that every outfield player who started in Amsterdam was from a top-four side; being a Liverpool player rightly or wrongly puts Gomez ahead of players like James Tarkowski and Alfie Mawson. We say ‘rightly’. We think. It’s a sodding minefield.

Danny Rose isn't the same as he used to be

19 (12) Joe Hart
Is a ‘good tourist’/admins the WhatsApp group/organises the darts so simply has to go to Russia. We still have a sneaky suspicion that Southgate will panic and play him in Russia. And we wouldn’t be too upset.

20 (27) Alex Oxlade-Chamberlain
From 15 to 27 to 20 on the ladder. That pretty much sums up Oxlade-Chamberlain’s situation with England. Starting five of eight games this season suggests that he is now very much ‘in’, even though he was ‘the least impressive of the attacking midfield collection by a distance’ against Italy.

22 (40) Jack Wilshere
We wrote in November: ‘We did feel sorry for him when Jack Cork and Lewis Cook were called up, but now he absolutely knows what he needs to do: Get a move and play bloody football. Because there are about 30 footballers with less talent higher up this list.’ It turns out he didn’t need to move; he just needed to stay fit and play well. Does his latest injury scupper his chances? It certainly means that he pretty much has to play the rest of the season with no interruptions. Prove that you are not made of balsa wood, Jack. Please.

23 (28) Danny Welbeck
No Premier League goals since September and yet he is in the England squad. See list of top English scorers in ‘5) Vardy’ for reasons why.

I’d genuinely rather have BWP in the England squad over Danny Welbeck.

24 (20) Ryan Bertrand
As I wrote in November: ‘The formation does not help. Danny Rose being back does not help. Ashley Young playing for Manchester United does not help. He is in for now, but I have a sneaky feeling that England’s qualification left-back might be England’s third-choice left wing-back come June.’ We got there quicker than I suspected.

25 (23) Ruben Loftus-Cheek
Henry Winter thinks he is going to the World Cup; we are not so convinced. It might be a straight fight between him and Jack; who can be least injured in June?

27 (8) Gary Cahill
I wrote in November: ‘As long as he is starting with Chelsea, he will be in Gareth Southgate’s plans. He’s not that radical, we don’t think.’ The problem is that he no longer starting for Chelsea. And at 32 (and just one position in his skill set), he doesn’t get the same pass as Joe Gomez.

29 (31) Jake Livermore
We keep thinking Southgate is growing on us, and then we remember that he rewarded Livermore for basically not going on holiday.

30 (22) Fabian Delph
Too injured to take up his rightful place in this squad ahead of the above. Probably too injured to make it back now.

31 (45) Lewis Cook
Ooh, look at us with all our thoroughly underwhelming midfield options.

32 (19) Harry Winks
And here’s one we thought we had made earlier, only for him to return from injury without really returning from injury. This one makes us feel a little sad, considering the names now above him.

33 (17) Michael Keane
We thought his ‘club form can only get better when the Toffees finally decide on a manager’. It didn’t; it got worse. Keane has well and truly f***ed this.

34 (NE) Ryan Sessegnon
There is a fraction of a chance that Danny Rose gets injured before the World Cup and Southgate just thinks ‘f*** it’. We would welcome such a maverick move.

36 (29) Chris Smalling
There is no way back for Smalling now. “While I’m playing under Jose and he’s happy and I’m playing regularly, then I’m happy with that,” he said in November. But Alfie Mawson has got to hurt.

38 (38) Tom Heaton
Some ‘experts’ still think he will make the squad. They are not experts.

39 (32) Nathaniel Clyne
This was not the season to get actually, properly injured.

40 (46) Jamaal Lascelles
I think we have made ourselves clear on this one.