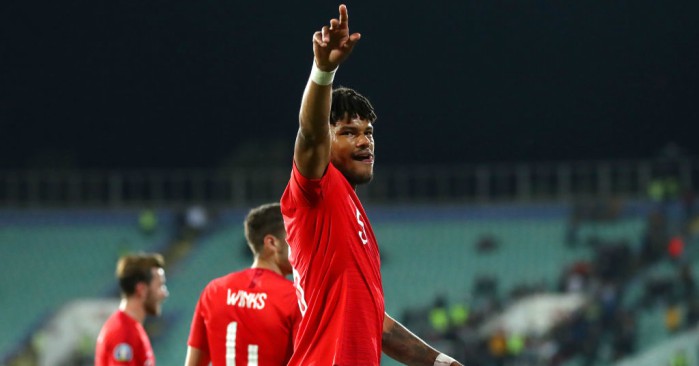 As ever, this represents our estimation of Gareth Southgate’s thoughts. And we feel like we know him well. Numbers in brackets pertain to this ladder from September.

1 (1) Raheem Sterling
Eight goals and five assists in six qualifying games. A goal every 61 minutes. Eight goals from 15 shots, 13 of which were on target. Remember when he couldn’t shoot? We unashamedly loved him then and we bloody adore him now.

2 (2) Harry Kane
Eight goals and four assists in six qualifying games. A goal every 65 minutes. Eight goals from 16 shots, 15 of which were on target. Remember when he couldn’t shoot? Nope. Us neither.

3 (3) Jordan Henderson
One of the first names on the team sheet…except when he commits a ridiculous and needless foul in the fourth minute of a qualifier and gets himself suspended for the next game.

And yes, he was terrible against Czech Republic.

Jordan Henderson and Declan Rice made a combined total of 1 tackle and 0 interceptions. Henderson had a passing accuracy of 66% whilst Rice had the second lowest touches of England players who played 90 mins. The most underwhelming England midfield of recent times.

4 (4) Jordan Pickford
He always looks a bit too busy for us ever to feel truly comfortable, but there were signs against Bulgaria that lessons had been learned.

5 (5) Harry Maguire
Honestly not convinced he will not drop a bollock that will cost England a semi-final place but he is clearly England’s first-choice centre-half; he has started pretty much every game for which he has been available for the last two years.

6 (7) Marcus Rashford
Back on the left against Bulgaria and back among the confidence and the goals. Whether he starts ahead of Jadon Sancho is pretty much irrelevant for the sake of this ladder; we would not be surprised to see him in every England squad for the next decade.

Bulgaria abysmal but Rashford so sharp tonight. Southgate taking him out of the team has helped and reinforced Rashford’s focus; he’s also more natural from the left. In contrast, Solskjaer‘s been too supine in retaining Rashford during arguably his worst spell of form for #mufc.

7 (6) Trent Alexander-Arnold
I wrote this last month: ‘Bizarrely, that rise does not mean we think he is England’s first-choice right-back – if there indeed is such a thing – but that his squad place is the most secure. Since his call-up in early June of 2018, his name has not been missing from a single England squad. He’s young; he plays every week for this great Liverpool side; he is a shoo-in.’

We thought he would/should play against Czech Republic, but Gareth Southgate is full of surprises.

8 (8) Jadon Sancho
Poor against Czech Republic but he was not alone. It is vital that we remember that he is only 19 and will still have off-days, though three goals and six assists in seven Bundesliga games this season suggest they will be few and far between.

9 (11) Ross Barkley
‘Definitely the most vulnerable of the England midfield’ was the verdict last month, so there was little surprise that he was dropped in favour of Mason Mount. But he responded with a mature performance and two goals against Bulgaria so all power to the only current England midfielder who has actually scored for his country (six times).

6 – All six of Ross Barkley’s goals for @England have been scored away from home. In the post-WWII era, he’s the highest scorer for the Three Lions not to score at home. Jetsetter.#BULENG pic.twitter.com/iGia9LZRpv

10 (12) Ben Chilwell
Eighth start in 13 games post-World Cup suggests that Chilwell is Southgate’s kind-of first-choice left-back, even if he erred on the side of caution against Czech Republic. He should not make that mistake again. I believe the Chilwell is our future…

11 (9) Declan Rice
He is only 20, so there are caveats, but right now he looks far from good enough to anchor that England midfield. Still, we persuaded him not to be Irish anymore, so his squad place is probably safe for the foreseeable. Is Jamie Redknapp right? Will he end up as a centre-half?

12 (14) Mason Mount
We thought he should start against Czech Republic but it turns out that we (us and Southgate) were wrong; he was not ready to play as a 10 in a system that does not really have a 10. Who knew? Still, he is established in this squad and James Maddison’s immaturity continues to work in his favour.

Mason Mount was the only England player to create more than a single chance vs. Czech Republic.

13 (13) John Stones
Needs to play football. Absolutely needs to play football. But the one thing that we have learned from these two England games is that Maguire, Stones, Joe Gomez and Tyrone Mings will be England’s four chosen centre-halves if they can all play enough first-team football. After the horrors of Michael Keane, that feels kind of okay.

14 (25) Kieran Trippier
He is being trained by one of the great defensive coaching minds. All power to the man. No f***er saw that coming.

15 (34) Tyrone Mings
Well, well. Excellent against Bulgaria and has booked his place in the next England squad, without a single shadow of a doubt. You love to see it.

That was a brilliant #England debut from Tyrone Mings. Assured in possession, calm and solid in defence, it looked like he’s been playing at this level for years. Doesn’t deserve a career highlight to be damaged by idiots. £21m bargain #avfc

16 (16) Nick Pope
There he is. Still not sure we could pick him out of a line-up if he wasn’t wearing goalkeeper gloves, mind.

17 (10) Joe Gomez
Still in the England squad despite a lack of football at Liverpool, so that proves he is still in Southgate’s plans. But then watched first Keane (terrible) and then Mings (excellent) partner Maguire, so that proves he absolutely does need to win back his Liverpool place.

18 (20) Harry Winks
Four England caps, four England wins. He really should be higher up this list but we are not sure Southgate has the stones to play him alongside Henderson (whose place feels safe) without a traditional holding midfielder against better opposition. For once, we would like to be proved wrong.

19 (15) Danny Rose
“Rose gave a performance tonight, my goodness, someone has got to get a hold of that guy. He was shocking, abysmal,” said Roy Keane. And he was right. Hurry up and get/stay fit, Luke Shaw.

20 (28) Tammy Abraham
In June: ‘He just needs to play Premier League football and score eight or nine goals to be in contention. Yes, we have so few strikers.’

In September: ‘He is well on his way.’

In October: There he is.

21 (31) Callum Hudson-Odoi
Four games back in this Chelsea side and he already has one goal and three assists. When did everything turn on its head and we got ourselves a barrel-load of frightening wingers and no defensive midfielders worthy of the billing?

22 (32) Fabian Delph
We said ‘we would not be surprised to see him start the first game of Euro 2020 as captain and mascot’ and then he was named in this squad. Ain’t no keeping that man down.

24 (21) Callum Wilson
We are not convinced that Southgate would take three strikers in a final 23-man squad and right now, Wilson looks like the obvious fall guy.

25 (17) Kyle Walker
Last month we believed that Walker might have been the temporary fall guy as England wanted to look at Aaron Wan-Bissaka. Now it seems painfully obvious that Walker is losing the brutal ‘experienced right-back’ battle with the much-improved Trippier.

26 (24) James Maddison
We already suspected that Southgate did not like the cut of Maddison’s jib even before he withdrew from England duty with a virus that did not keep him out of the casino.

27 (18) Michael Keane
Last month: ‘England’s fourth-choice centre-half. And we never want to see him in an England shirt again.’

This month: Thanks to Mings, we might never him in an England shirt again.

28 (21) Jesse Lingard
Finally, some jeopardy. England will stagnate without it.

29 (26) Aaron Wan-Bissaka
A £50m full-back should probably be higher but Southgate will want to see those spider legs up close. And memories of the England Under-21 sh*t-show of the summer are still fresh.

31 (NE) Fikayo Tomori
It took only a handful of Premier League appearances for Tomori to usurp the likes of James Tarkowski and Lewis Dunk. That’s the power of Chelsea.

Reporter: “With Tomori, Mount and Abraham now in the team, are you becoming a senior member of the squad nurturing the younger players?”

Trent Alexander-Arnold: “I’m pretty sure Tomori and Abraham are older than me.”

33 (27) Eric Dier
We just wish he had dropped that far because we had uncovered a tremendous defensive midfielder with exceptional composure and presence.

34 (29) Dele Alli
On the week he was left out of the England squad, he took up yoga and ditched his commercial activities. Time to be serious, Dele.

Chances created from open play in the Premier League:

36 (30) Ruben Loftus-Cheek
Needs to get fit and get into that Chelsea side.

37 (35) Luke Shaw
Just play a month’s worth of games and you will shoot up this ladder, fella.

38 (38) Angus Gunn
Another England keeper playing in the Premier League? These are crazy times.

40 (39) Phil Foden
There’s no need to panic, but we would still really bloody love to see him play enough football to challenge that England midfield.