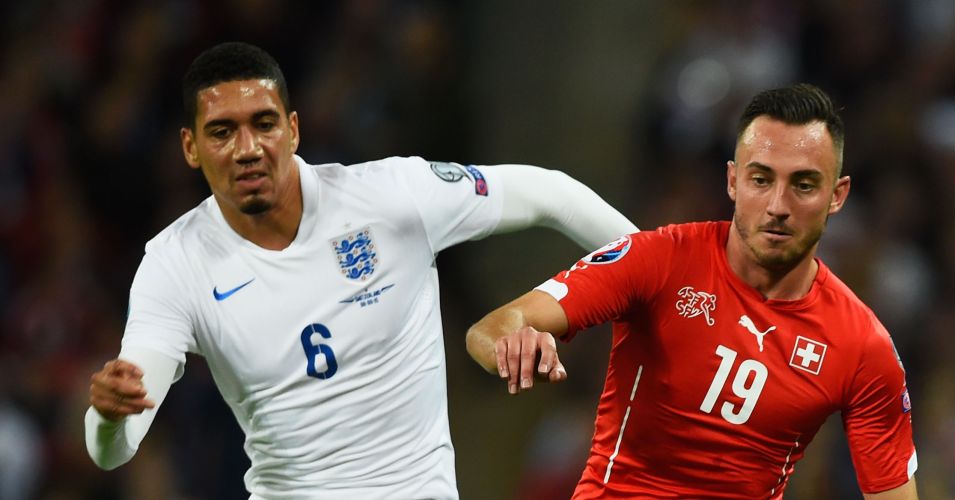 The top two stays the same from June, but below Rooney and Hart there’s plenty of movement. Chris Smalling, Luke Shaw and Harry Kane are the big movers.  A lot depends on whether Jack Wilshere and Danny Welbeck are broken or not…

As ever, a reminder: The order below is based not on our opinion, but our estimation of Roy Hodgson’s thoughts. Blame him, not us, if it makes you mad.

1 (1) – Wayne Rooney
We love obscure statistics here at Football365 so here’s a doozy for you: Wayne Rooney is now England’s record goalscorer with 50 goals. We might tweet that one.

2 (2) – Joe Hart
He literally has no competition; it’s just as well that he is an excellent goalkeeper. Hail that big yellow taxi when he goes.

3 (5) – Raheem Sterling
‘Maybe he needs another shot of hippy crack,’ wrote Mark ‘fool’ Irwin in The Sun after the Switzerland game. We suspect he wrote that before Sterling won the penalty with the nimblest/most expensive feet in all the land.

5 (12) – Chris Smalling
Man of the match against Switzerland, according to Glenn Hoddle. We were a tad more impressed by Luke Shaw but Hoddle was right to highlight the performance of a player who actually, finally, after 19 caps, looks like a bona fide England international. Huzzah.

6 (6) – Jordan Henderson
An absolute certainty for Hodgson’s European Championship squad and near-certainty for the starting XI despite never producing an excellent England performance in 22 attempts. And anyway, he’s on the cover of FIFA 16 so he has to go. If I played video games I would a) never play FIFA 16 again in protest and b) be single.

7 (3) – Jack Wilshere
From 2) in November to 7) in April to 3) in June and now to 7) in September. That pretty much illustrates the frustration of the incredibly brittle Wilshere.

8 (4) – Gary Cahill
Has started every serious competitive England game for which he has been fit since October 2012. We think his position might be safe.

9 (8) – Danny Welbeck
Barring Rooney, there were only nine goals in that England starting XI for the Switzerland game. It’s an issue that Danny ‘Eight Goal’ Welbeck would solve (if fit).

11 (8) – Phil Jones
Barring an unlikely hat-trick/saved penalty double, we suspect Nathaniel Clyne could not have possibly done well enough this week to convince Roy Hodgson that Phil Jones should not be crowbarred into this England team somewhere. We really, really sodding hope it’s not in midfield.

12 (11) – Alex Oxlade-Chamberlain
Unbeaten in 22 games for England so there’s absolutely zero chance that Hodgson will leave him at home.

15 (10) – Leighton Baines
‘We are presuming that he is England’s first-choice left-back until Hodgson chooses somebody in his stead in a meaningful game,’ is what I wrote in June. Or, alternatively, until Luke Shaw looks remotely like a player who might one day be worth £30m. That day has mercifully arrived.

16 (16) – Daniel Sturridge
“It’s getting on for a year now [since he played for England],” said Hodgson this week. “They (Sturridge and Welbeck) are always in my thoughts because I think they’re very good players and they did extremely well when they were playing in the national team I was coaching. I’ve got to make certain that there are a few Vardys and Kanes and Walcotts, because we can’t keep going around talking about the ones who aren’t there.” A few Vardys? I’m not comfortable with one on the pitch. If Sturridge is fit, he’s there.

17 (26) – John Stones
Sorry Jags, he’ll send you a postcard. Awkward. In his defence, Stones did try to leave so it could have been slightly less so.

18 (22) – Michael Carrick
Carrick might have been secretly pleased to see Jonjo Shelvey not quite getting it right against Switzerland. A pass completion rate under 90%? Carrick would self-flagellate.

19 (19) Andros Townsend
‘Andros Townsend fears he might have to quit Tottenham in January to safeguard his Euro 2016 place,’ wrote John Cross in the Daily Mirror this week. Pah. Nonsense.

20 (23) – Ben Foster
Unlike his almost-namesake Fraser, Ben should at least be back to sit on the bench and watch Hart being rather good.

21 (18) – Fabian Delph
Can Hodgson afford to take another potential ten-second breakdown to France when Wilshere has already walked tentatively onto the plane, careful not to turn his gammy ankle?

22 (25) – Ross Barkley
There is massive goodwill for Barkley, who will undoubtedly get more patience than – for example – Jonjo Shelvey. We keep changing our minds but when the question is ‘Barkley or Lallana?’, our answer usually begins with a B (for ‘bloody hell, is there nobody else?’).

24 (20) – Phil Jagielka
‘He will be approaching 34 when Euro 2016 comes around. Is he just keeping the bench warm for Stones?’ We can say now: Emphatically yes.

25 (25) – Theo Walcott
Missing out to a player who cannot get on a truly rotten Tottenham bench must really hurt. And don’t you go thinking that two goals against San Marino are going to change anybody’s mind…

26 (42) – Jonjo Shelvey
Instinctively we really rather like him. What he needs is another chance against opposition that dare to come within eight yards of an England player.

27 (15) Adam Lallana
No amount of Nivea can mask his start to the season.

32 (31) – Tom Cleverley
There was a time when he was about 25 places higher on this list. Those days are long gone but if Wilshere and Delph keep breaking toenails…

33 (37) – Ryan Mason
Genuinely just noticed he was in the latest squad.

34 (39) – Jamie Vardy
I wrote in June: ”Six months ago it looked like Jamie f**king Vardy might get a call-up,’ wrote Storey in March. Frankly, nobody saw that coming. It won’t happen again. Remember Matt Jarvis?’ It happened again. We’re f***ed.

35 (35) – Saido Berahino
It must hurt to see Vardy don an England shirt. If he gets his head/arse in gear, there’s a chance of France.

36 (28) – Danny Ings
Has played 29 minutes of PL football for Liverpool. Who can claim they are the slightest bit surprised?

37 (36) – Charlie Austin
“I wanted the club to be established. I didn’t want the club to be pushed on me,” said Austin when explaining why he turned down a move/any chance of playing for England this season.

38 (32) – Ashley Young
Had a chance when he was regularly starting with Manchester United. Now? Not a smoky sausage.

39 (33) – Kyle Walker
Not started a competitive game for England since late 2013. Will he ever start another?

40 (RE) – Micah Richards
We’re so short of centre-halves, the big man is already back.