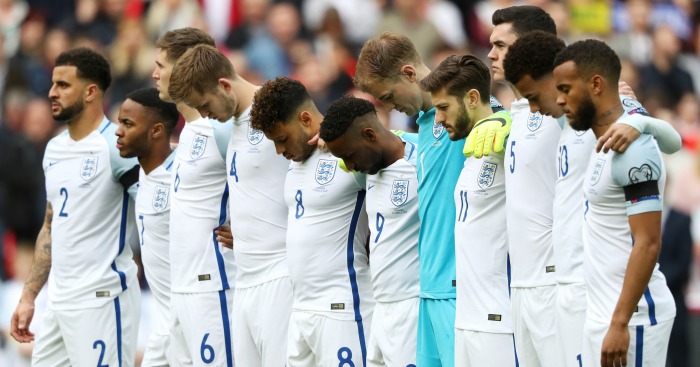 To repeat, as ever, this is not our opinion but our estimation of Gareth Southgate’s thoughts. It’s also not his squad now, but the one he will pick in 14 months to take to Russia (should we qualify). So save your anger about Jermain Defoe…

1 (10) Harry Kane
From No. 10 to No. 1, and it really cannot be doubted. Wayne Rooney has gone, the legs of Daniel Sturridge and Andy Carroll cannot be trusted and Jamie Vardy will be 31 and Jermain Defoe four months from turning 36 when Russia comes around. England have one striker who blends club form with relative youth, and one striker only. His name is Harry Kane, and I’m submitting the patent for an entire house fashioned out of cotton wool.

2 (8) Dele Alli
Not at his best against Lithuania, when he seemed to get frustrated by being fouled so often. Yet if Gareth Southgate was making a list and checking it twice, Alli is the midfielder who gets first dibs when picking his seat on the plane. He’ll still only be 21 in June 2018, and yet may well have scored close to 50 goals for Tottenham by then.

3 (2) Adam Lallana
Currently England’s best player, and moves down a place only through Kane’s increased importance. The rise in Lallana’s performance level over the last 18 months is a genuine joy to behold; we just wish we could inject him with something to halt the ageing process.

4 (1) John Stones
A faller from top spot, through both his continued patchy form for Manchester City and the unexpected rise of the young-ish, English, Premier League defender, but Stones need not worry. He has played every minute of a qualifying campaign during which England are the only country in the entire continent not to have conceded a goal.

5 (4) Joe Hart
A moment of unease when punching against Germany and meeting a (very offside) Lithuanian forward, but otherwise exemplary. Hart continues to be the personification of the England team itself, rock solid in qualifying before melting during major tournaments. Enjoy the sunshine before the rain.

6 (5) Raheem Sterling
The only England winger who looks capable of beating two or three players at a time, as he did to unlock Lithuania in the first half on Sunday. You can boo him, you can harangue him in the press and you can accuse him of anything you like, but Sterling continues to be one of England’s brightest sparks. At 23 when the World Cup begins, he will be a fixture in Southgate’s plans. Sterling will also be closing in on 50 caps by then, which is mental for someone so young.

7 (3) Jordan Henderson
Drops slightly due to injury, but still a certainty to make the squad and a near-certainty to start. Jake Livermore and James Ward-Prowse were only filling in for a player Jurgen Klopp considers crucial to his Liverpool team and like it or not (and I struggle to be enthused), Southgate is likely to feel the same.

8 (9) Kyle Walker
The image of Nathaniel Clyne in Walker’s rear-view mirror is getting smaller all the time.

9 (11) Danny Rose
Currently injured and therefore not part of the latest squad, Rose still climbs into the top ten thanks to both his club form and Jose Mourinho’s refusal to give Luke Shaw regular football. If Southgate will take one flier and one defensive left-back then Rose wins out, and that case only strengthens if England play a Tottenham-style 3-4-3.

10 (7) Eric Dier
I refuse to learn anything new about Dier or England until a competitive match against a team that causes England problems and won’t allow us to keep the ball. Slightly scarily, that’s something we won’t face before the World Cup. Until then, Dier remains likely to start alongside Henderson. I won’t apologise for retaining doubts, but happy to be dissuaded.

11 (13) Gary Cahill
‘He’s captain, more reliable than Chris Smalling and certain to start in a centre-back pairing, let alone a defensive three,’ I wrote after the Germany game last Wednesday. Southgate’s use of the 3-4-3 actually pushes Cahill up this list. Cahill has won everything at club level, and before England play again will have added a second Premier League title.

12 (23) Marcus Rashford
Rashford was guaranteed to shoot up this list having been included in the senior squad. Taken to Euro 2016, there is no way he doesn’t make the World Cup plane as things stand, even if only as a potential game-changer from the bench. “He makes powerful runs behind defenders. His mentality is very mature, very humble. He wants to learn, wants to improve, has a good view on the game and for a young player I think he has intelligent input when you ask him tactical things,” said Southgate last week. Apart from that…

13 (27) Ryan Bertrand
Our first big climber from outside the squad to a seat on the plane. If Sterling is going to play wide left (and he may) Southgate will want defensive cover at left-back in his squad. Sorry Luke, but being different to Rose is Bertrand’s most useful asset in making the grade.

14 (20) Jack Butland
England’s No. 2, when he finally manages to get fit. Butland’s absence has probably cost him a shot at taking Joe Hart’s place for the World Cup.

15 (14) Nathaniel Clyne
The accepted wisdom is that managers do not include two right-backs in 23-man international squads, but that must be reconsidered for two reasons: 1) Roy Hodgson took both Walker and Clyne to France, and 2) If Southgate is to play with a 3-4-3, right wing-back becomes a specialist position.

16 (34) Ross Barkley
Shoots back up the list after his response to Ronald Koeman’s criticism and return to the international fold. It’s now seven consecutive England games spent as an unused substitute for Barkley, but in this sort of club form he won’t be left at home.

17 (19) Chris Smalling
Moves up slightly due to the potential for three at the back and therefore the necessity for added central defensive cover. Still, we’re mightily pleased by the rise of ‘other’ options, even if Smalling isn’t.

18 (17) Danny Welbeck
The first big decision to make, but the ladder stood by Welbeck through injury and won’t lose faith now. Southgate left him out over fitness issues, but Welbeck’s record of 11 goals in 20 competitive international appearances is the best in the squad with Rooney gone. Add in the ability to play as wide forward, and Dat Guy makes Dis Squad.

19 (16) Jack Wilshere
And the second big decision. No call-up for Wilshere this time, which must have come as some surprise and disappointment. Still, we’re estimating thoughts for a 2018 World Cup squad, and just don’t see Wilshere missing out to Jake Livermore or James Ward-Prowse when it really matters.

20 (22) Fraser Forster
Still England’s No. 3, but could do with playing well at club level once in a while.

21 (32) Michael Keane
After Bertrand and Barkley, the third biggest climber into the squad. Keane fully deserved his call-up, played all 180 minutes during the international break and thoroughly impressed watching manager, supporters and ladder-compilers. And with that, he moved ahead of Phil Jones.

22 (24) Jamie Vardy
Given the manner in which other options have fallen away, it really might be as simple as Vardy or Defoe. Given that Defoe would not have made the latest squad were Kane fit, I’m siding (or believing Southgate sides) with Vardy. Just.

23 (18) Jesse Lingard
At 4.59pm on Sunday, Lingard and Oxlade-Chamberlain were switched around in this ladder. Then came a succession of misplaced passes, ineffective dribbles and general mediocrity from the latter, and Lingard stepped back into the squad. The battle to be the unused outfield player in Russia really is hotting up.

25 (RE) Jermain Defoe
Yes, he scored. Yes, players should be picked on form. Yes, Defoe is a lovely person. Yes, age should be irrelevant. But it isn’t. Defoe will be almost 36 by the time the World Cup gets underway, and that really will be factored into Southgate’s call. Keep scoring and starting regularly wherever he moves from Sunderland this summer and the situation could change, but, for now, when everyone is fit, Defoe is on the standby list.

26 (15) Luke Shaw
I’ll hold my hands up, because I got this wrong. I thought Shaw would be England’s long-term left-back, but his club manager has scuppered that prediction and Rose has thrived given the chance. Shaw’s career now needs a forced reset, probably by moving as far away from Mourinho as he can.

27 (RE) Phil Jones
Called up, only to pull out through injury. It’s a long title for Phil Jones’ autobiography, but accuracy beats brevity.

28 (12) Daniel Sturridge
The only way he makes it is if he joins West Ham/Southampton/Newcastle and promptly scores 15 league goals next season. Which really could happen.

30 (6) Wayne Rooney
A catastrophic fall. In one squad and follow-up press conference, Southgate quietly and efficiently carried out what many feared would cause an earthquake. Rooney was excluded due to a lack of regular football, and so that should be that. Well done Gareth.

31 (36) Michail Antonio
Still climbing, but not quite quickly enough. Could he get a summer move and improve those chances?

33 (35) Nathan Redmond
A cap! Something to wear when he’s trudging home from the departure gate.

34 (RE) Jake Livermore
A surprise call-up, but surely only to cover for those absent.

35 (44) James Ward-Prowse
A surprise call-up, but surely only to cover for those absent.

36 (43) Ben Gibson
A surprise call-up, but surely only to cover for those absent. Until he moves to a bigger club.

37 (33) Jordan Pickford
Injured almost since Southgate was appointed. His time will come, but not yet.

38 (NE) Harry Winks
Unlikely to get a chance in Scotland or France, but Malta in September, perhaps?

39 (46) Andy Carroll
Somehow moves up due to the paucity of other options, but it’s scant consolation: Southgate doesn’t trust his legs.

40 (30) Aaron Cresswell
Keeps getting bloody injured, and England have so, so many left-backs.