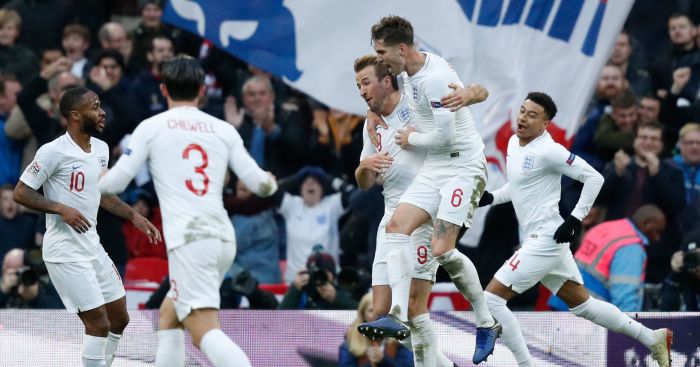 As ever, this represents our estimation of Gareth Southgate’s thoughts. And we feel like we know him well. Numbers in brackets pertain to this ladder from last month.

1 (1) Harry Kane
It was ever thus. He now has 20 goals in 35 England games. That’s quite a lot. Wrap him in cotton wool and hold him gently until June, when we are going to go and win this damned thing.

2 (5) Jordan Pickford
“I actually think international football suits him a lot in the sense of the way the team play,” says Gary Neville. And it’s a bloody good job because the alternatives are frightening. The fact that he started against the USA tells you everything about Southgate’s faith in the three (count ’em) alternatives. Even though Pickford can be genuinely terrifying to watch.

Martin Tyler is genuinely terrified every time the ball goes to Jordan Pickford. It's great to listen to.

3 (3) John Stones
Was made to look ridiculous by Andrej Kramarić, but we all know Stones has the capacity to look ridiculous; he usually doesn’t need Andrej Kramarić to help him. And yet he is clearly Southgate’s favourite, starting every competitive match for which he has been available for over 12 months. Listed by Wayne Rooney as one of England’s three genuine superstars in 2018. Is three enough for a Golden Generation?

4 (4) Joe Gomez
‘That it was a quiet game for the Liverpool centre-half is far more of a positive than a negative,’ wrote Matt Stead on Sunday. He was probably doing Gomez something of a disservice as the 21-year-old was once again excellent against Croatia. He is so young, so good and nowhere near his peak as a centre-half. Which is delicious.

5 (2) Harry Maguire
What happens when all three are fully fit and available? Right now, Maguire’s lack of truly elite football might just see him edged out. But that is all fine. We have three actual centre-halves! And they are all under 25!

Delighted to win the Nations Group!

6 (6) Raheem Sterling
We still remember Spain. Not picking Sterling now seems as preposterous as making him a scapegoat for every failure. No Englishman who starts for Manchester City should be anything but integral to this England side.

7 (7) Marcus Rashford
I wrote last month that ‘England’s attacking front three will take some shifting now. And not only because we have literally no other options.’ It does now feel like we have other options in Jadon Sancho and Jesse Lingard, but for now it’s all about KRS(-One). He was excellent against Croatia.

What a performance from @MarcusRashford. He’s been absolutely rampant down the left hand side today. Not the first #MUFC player to perform on international duty 👀🤷🏼‍♂️.

8 (9) Eric Dier
The switch to a 4-3-3 has benefited Dier more than anyone; he has started four of England’s last five games and – barring a couple of hairy moments – he was impressive against Croatia. Not as impressive as Fabian Delph, but who the hell is?

9 (11) Jesse Lingard
In October I wrote that ‘a lack of cover for Rashford and Sterling out wide means Lingard becomes an underwhelming but very handy squad option for country as well as club’. In November he scored in back-to-back England games. For England – as for United – he is very bloody useful indeed (even if it’s just for reminding you of David Nugent).

10 (8) Kyle Walker
If it’s a 4-3-3 then it’s got to be Walker. Because no Englishman who starts for Manchester City should be anything but integral to this England side (even if – whisper it – he looked a little shaky against Croatia).

11 (10) Jordan Henderson
Missing out on famous wins over Spain and Croatia will not endear anybody to Henderson, who has started only five of Liverpool’s 12 Premier League games this season. We presume he is still the first-choice partner for Dier in midfield, but both Fabian Delph and Harry Winks would like a word.

12 (16) Ross Barkley
Starting ahead of Dele Alli is quite the coup for Barkley, even if he didn’t quite do enough to make that a no-brainer. The transformation has been extraordinary though; it turns out actual coaching works.

13 (18) Ben Chilwell
Four consecutive starts powers him up this ladder. Southgate might ultimately prefer Luke Shaw, but Chilwell is doing a fine job of being the far more reliable and less brittle alternative. And he’s only 21. If you are not even a little bit giddy, then I fear we cannot be friends.

14 (32) Fabian Delph
Well bloody hell. We did not see that one coming. It turns out that only playing 362 minutes of football for Manchester City but being coached by Pep Guardiola alongside David Silva and Kevin de Bruyne maketh a man a better bet than just about anybody else playing for just about any other Premier League club.

Fabian Delph, keeper of the flame of the Basics of Football.

15 (13) Harry Winks
Didn’t quite do enough v the USA to force himself into the starting line-up for the Croatia game that mattered. But that’s absolutely fine because time is very much on his side. Jake Livermore was in this England squad prior to the World Cup; we have come a long way.

16 (14) Luke Shaw
Really needs to be actually available for England at some point. It has been over three years since he completed 90 minutes for his country; he has fewer England caps than both Jack Butland and Ruben Loftus-Cheek. Which is weird.

17 (12) Kieran Trippier
His form for club has pretty much dropped off a cliff so the gap between him and Trent Alexander-Arnold is narrowing. In a 4-3-3, there can be room for only two right-backs and Walker has one place nailed. Trippier does have one weapon, mind…

18 (17) Dele Alli
First man off the bench against Croatia when England needed a goal. But the truth is that he has only scored as many England goals as his best friend Dier. Right now, he is a squad option rather than a guaranteed starter. Scoring just once in the Premier League this season hardly screams ‘pick me’.

20 (26) Jadon Sancho
Just look at him go. He can start planning for Portugal in June. And we are bloody chuffed because he is a genuinely exciting talent. These are the sexiest of times.

21 (48) Michael Keane
Forced himself to the front of the queue to be England’s fourth-choice centre-half. If Thursday was an audition, he has just shoved Lewis Dunk out of the way to bag a place in the chorus.

22 (39) Callum Wilson
Nobody has missed more Big Chances in the Premier League this season. He missed a couple on Thursday too, but he has emerged as the only real back-up to Kane as a lone striker. Well done, fella.

25 (20) Nat Chalobah
Southgate loves him, but even he couldn’t pick him after just nine minutes of Premier League football this season. But he did then play 90 minutes against Southampton last week, so maybe the dream is not yet over.

Any other #WatfordFC fans worried that Chalobah will never fully recover? His running gait looks odd now, really awkward. Don't remember him moving like that before the injury. #SOUWAT

26 (35) Lewis Dunk
The 23rd of Southgate’s 24 England debutants and his current fifth-choice centre-half. My word, there are a lot of decent but unspectacular English centre-halves in the Premier League…

28 (30) Ruben Loftus-Cheek
Back in the England squad but given just 20 underwhelming minutes against the USA. Europa League football is simply not enough. Get out on loan, fella.

Gonna say this with a bit of a heavy heart but, is Danny Rose committed to Spurs, playing games etc? Seems to take ages coming back from ‘minor’ injuries, always coming off etc. Or is he just physically finished? Sadly one of them has to be true imo

30 (22) Danny Welbeck
Simply because only a fool would ever rule out Danny Welbeck. And because the squad keep a photo of him next to the TV.

32 (NE) Reiss Nelson
“I don’t want him to be thinking that he has just got to roll up and he’s the next one, because there is really good competition for places.” That’s England coach Southgate there, talking about the next one. It’s just a matter of time.

33 (28) James Maddison
No English player has created more chances in the Premier League this season. When creativity is at a premium, that has to count for something.

36 (29) Mason Mount
No goals or assists in his last six Championship games. Back in the box, Mason.

37 (49) Conor Coady
The next central defensive cab off the rank? If there’s any justice in the world…

38 (41) Aaron Wan-Bissaka
We have some excellent right-backs, you know.

39 (31) Adam Lallana
It now feels bizarre that he was in an England squad in September.

40 (37) Lewis Cook
Clearly been tasked with captaining England’s Under-21s at the European Championship. And that feels about right.