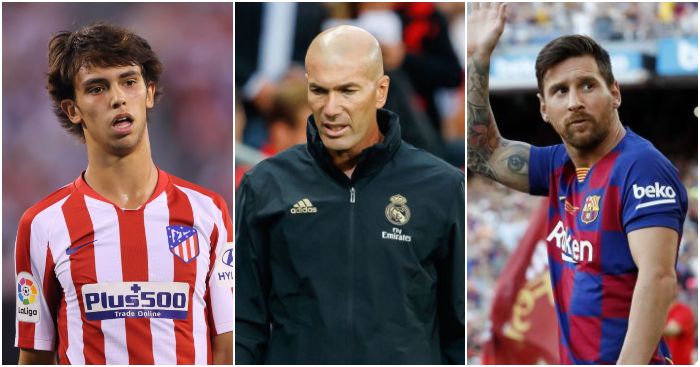 Who will win the league?
Barcelona. Both Atlético and Real Madrid have strengthened this summer, but their new-look squads may take some time to find their rhythm. Barcelona’s consistency, coupled with the small matter of having Lionel Messi on their books, will carry them to a third consecutive league title.

And the rest of the top four in order?
Atlético Madrid, Real Madrid, Sevilla.

Which three clubs are going down?
It’s difficult to look beyond the promoted sides, but of the three Osasuna may just about have enough to survive. Granada and Real Mallorca will not be so fortunate, and will head back from whence they came, along with Real Valladolid.

Who will be this season’s surprise package?
Real Sociedad. Things have been looking up for the Basque side since manager Imanol Alguacil was appointed midway through last season, and some impressive work in the transfer market this summer has added to the buzz. The addition of Alexander Isak, Portu and Martin Ødegaard to an already talented squad which includes the likes of Mikel Oyarzabal and Asier Illarramendi means La Real will be a force to be reckoned with in La Liga this season.

Who will win the Pichichi award for top goalscorer?
Messi, I would imagine. If he stays fit, then no-one will be able to stop him from winning his fourth Pichichi in a row – a record seventh overall.

Which goalkeeper will win the Zamora award for lowest goals-to-games ratio?
It has to be Jan ‘El Muro’ Oblak. The Slovenian keeper has been without equal since breaking into the Atleti side in 2014, winning the last four Zamora trophies. With an average of 22 goals conceded per season over the last four years, only a fool would bet against him making it five in a row.

Who will be the best signing?
Barcelona’s Antoine Griezmann and Eden Hazard of Real Madrid are the most eye-catching signings of the summer, and will undoubtedly improve their teams, while Nabil Fekir’s €20m move to Real Betis could be one of the all-time great bargains, as long as his dodgy knee doesn’t prove too troublesome. But the best of the lot will be João Félix of Atlético Madrid. It is an awful lot of money – €126m – for an unproven 19-year-old, but in terms of raw talent Félix is among the best in the world, and will only get better.

Which big-money signing will flop?
Probably not a flop in the truest sense of the word, but 30-year-old Brazilian goalkeeper Neto’s move from the Mestalla goalmouth to the heated seats of the Camp Nou dugout for €35m seems excessive to say the least.

Who will be the player of the year?
It’s a boring shout, but it has to be Messi. There’s simply no-one else that can match him.

Who will be this season’s breakout star?
He may be 24 years old already, but Marcos Llorente hasn’t had the chance to show what he can do in La Liga since a promising loan spell at Alavés three seasons ago. Overlooked by a series of Real Madrid managers, Llorente has now found a home in the midfield of city rivals Atlético, filling the void left by the departing Rodri. He should finally get the playing time his talent deserves at the Wanda, and Madrid may well end up regretting their decision to let him go.

Who will be the first manager to leave their job?
Marcelino. After a couple of years in the unfamiliar realms of stability and success, Valencia appear to have reverted to type in the last couple of weeks, after a split emerged between owner Peter Lim and sporting director Mateu Alemany. If Alemany goes, Marcelino is likely to follow, and Valencia will once again feel the familiar embrace of chaos.

What are you most looking forward to this season?
I’m looking forward to seeing how Atlético Madrid: The Next Generation get on, and whether their exciting new line-up will see a change in approach from Diego Simeone. I’m also keen to see the redemption of Julen Lopetegui at Sevilla, and how Zinedine Zidane’s difficult second album unfolds at Real Madrid. It would also be nice if VAR-related controversy were to die down this season. You may say I’m a dreamer…