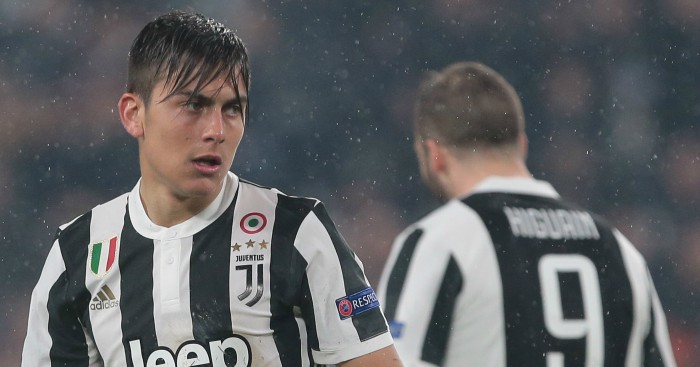 While Glenn Murray was tweeting crying emojis after his 11 Premier League goals did not earn him an England call-up, imagine how it felt to be Paulo Dybala, dropped by Argentina despite scoring 17 goals in Serie A already this season. The reason? “It is complicated for Dybala to get used to our system,” said Argentina coach Jorge Sampaoli, perhaps accidentally – but more likely deliberately – hinting that Dybala’s critics are right to question his maturity and intelligence.

The message from Sampaoli to both Dybala and Mauro Icardi was brutal – it was too late for them to ingratiate themselves before the World Cup. Dybala’s only chance was surely to prove his nerve and effectiveness on the biggest stage; how could he not pick a Champions League winner? He has been largely anonymous but then scored a key goal at Wembley to beat Tottenham. That it was his first Champions League goal of the season would be forgotten if he then delivered against Real Madrid.

You know by now that it was a disaster. Wild shots and blind alley runs were followed by not one but two stupid yellow cards. To get booked for diving is careless; to add another yellow card with a high foot hints at stupidity. Those who seek to compare him with Lionel Messi – and there were many when he scored ten goals in his first six Serie A matches of the season – should be embarrassed. He was ranked 14th in the Guardian’s list of the world’s top 100 footballers in mid-December and that now looks incredibly generous. Better than Antoine Griezmann? Better than Mo Salah? Better than Christian Eriksen? Four months can be an awful long time in football.

Dybala fails on the big stage yet again, no character when it matters. Contrast with Isco and his desire to get on the ball, dominate, take the game to opponents.

“He’ll be disappointed today, because he was one of the players given a star billing,” said Rio Ferdinand with the kind of understatement only English pundits can muster. Disappointed? He should be devastated. When it comes to international recognition and individual awards in 2018, you need to make an impression on the Champions League or the World Cup; he has embarrassed himself in one and is very unlikely to even play in the other.

In 2016, Dybala was named in the FIFA FIFPro World XI fifth team (who knew there was such a thing?) alongside Serge Aurier, Hector Bellerin and Jamie Vardy; in 2017, he was promoted to the second team and found himself in the same company as Paul Pogba, Luis Suarez and Isco; he had reached the second strata of players behind Messi, Ronaldo and Neymar. Now, there is no chance of further promotion at the end of the season. Indeed, there seems to be little hope of the big-money transfer to a true Champions League giant that he refused to rule out in November.

“I want to win everything now,” he said. But he will have to wait for everything but another possible domestic double. His time is absolutely not now.