Of the seven of us, only one saw Liverpool winning the title. This way for many more Christmas turkeys... 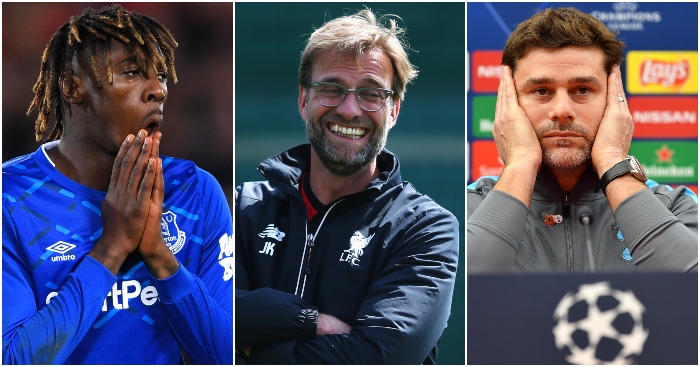 A simple one to start. Who will win the league? Extra points if you pretended it’s not Man City…
‘Shove your extra points’ was the message from six of the seven F365ers. Only Joe Williams went for anyone but City, with our resident Blade going with his gut feeling that this is finally Liverpool’s year. And he will surely be right.

Everyone else had far too much faith in the reigning champions. Man City need an 18-point swing if they are to make Daniel Storey’s weirdly specific prediction correct, while Johnny Nic didn’t fancy Liverpool to finish within ten points of last season’s total of 97. He’s sort of right – they’re on course for 109.

‘Dispiritingly, I don’t think it’ll be nearly as interesting this time around,’ said Seb Stafford-Bloor, joining Johnny in being right for all the wrong reasons.

And the rest of the top four, in order. Which nobody ever gets right.
Since no one had Leicester and only Johnny had Chelsea, it seems like we’ve f*cked this one again. Winty, Storey and Ian Watson all went for Man Utd because, as Storey explained, ‘my 90s childhood has indoctrinated me against them being rubbish’. We won’t be making that mistake again. Until next August, probably.

Five of us were fully on board the Emery Express on its way to the Champions League, with only Johnny earning any credit from this test by saying that his four ‘will be comfortably ahead of Spurs and Manchester United who will both lose their managers this season’. One down, another surely to follow.

Who’s going down, down, down?
Winty, Storey and Johnny all tipped Sheffield United to go straight back down and only the threat of being ostracised from his family stopped Williams from doing likewise.

Norwich were the unanimous choice to drop straight back into the Championship and though a promising start caught us all off guard, it looks like we might all be right. Which makes for a pleasant change.

Crystal Palace were the second most popular pick to go, with Stead, Storey, Seb and Swatson all underestimating Roy once more. Seemingly, we’ll never learn – though this race has many miles still to be run.

Which club will be a pleasant surprise?
Watson claws back some credit here. ‘Chris Wilder’s Championship All-Stars at Sheffield United will defy the relegation odds while bloodying a few noses. Perhaps literally,’ he said, though there was no mention of a Champions League push.

Joe also under-cooked it. He went for Leicester, saying: ‘The signings of Ayoze Perez and Youri Tielemans will see them hovering around sixth place.’ Would anyone really have been surprised by Leicester finishing sixth? You’re not having that, Williams.

‘Bournemouth. Do they count?’ No, Seb, they don’t.

Storey and Johnny plumped for Villa and though they’ve done some good work, they currently languish three points off safety, behind Steady’s choice of Brighton and Winty’s of Southampton. Her love for Ralph is being sorely tested.

Golden Boot picks…
Five Premier League players are currently in double figures but only Winty and Seb managed to identify one of them. They went for Pierre-Emerick Aubameyang and the Arsenal striker is in joint-second, six goals behind Jamie Vardy, who no-one saw coming.

Danny Ings, currently level with Aubameyang, also didn’t feature in our thinking. Don’t pretend he was in yours.

The other five among us all opted for Sergio Aguero, Harry Kane or Raheem Sterling. They all lurk in joint fourth place, waiting to make their move.

Storey admitted that Kane wasn’t the sexiest pick so he went looking for value: ‘Marcus Rashford is at 28s and might play centrally, Richarlison is 100s and Che Adams is 200s, which is a longer price than Luka Milivojevic.’ Thanks for that.

Which new signing will have the greatest positive impact?
Winty’s shame in picking Moise Kean is only partially hidden by Johnny Nic opting for two turkeys.

‘I’m hoping Joelinton will improve Newcastle a lot, which in fairness even a half decent wheelbarrow full of chopped liver rolling down a hill would do. But it is almost ridiculous that Everton have signed Moise Kean. If anyone is ‘the next big thing’ it is him.’ Sheesh.

Stead went for Aaron Wan-Bissaka, suggesting that the right-back ‘represents about ten upgrades on Manchester United’s previous options’. Just imagine if he was any good beyond the halfway line…

Seb offered up Tanguy Ndombele, which seems dafter now than it did then after Jose Mourinho left him on the bench on Sunday, preferring Eric Dier and Moussa Sissoko instead. Williams chose Nicolas Pepe, the silly-billy.

And which one will turn out to be a massive flop?
Watson and Stead were right to place Joelinton in this category. Though it didn’t require that much imagination to foresee that a lad who’d scored only seven goals in each of the last two seasons while often starting from wide wasn’t in fact the new Alan Shearer.

Seb explained his reasons for choosing Dani Ceballos but he was still undone by his optimism: ‘People will have forgotten that he’s even at Arsenal by February.’ November, more like.

Williams went for Kean. Turns out that hunch wasn’t just his sh*t office chair. Johnny Nic thought Harry Maguire might struggle and some people would suggest he was right.

Winty’s expectations of Christian Pulisic were not unreasonably low, it turns out. Should we cut Dan some slack for not foreseeing that Mateo Kovacic might become useful? ‘I don’t think he gets into their team,’ he said before Kovacic played in every Premier League match so far this season. FFS, Storey.

Next up: The ‘Pascal Gross award’ for bargain of the summer…
Holy sh*t. We’ve all had a beast here…

Storey is perhaps the biggest Christmas turkey on the shelf. ‘My favourite category, fact fans,’ he declared by offering up ‘Josip Drmic on a free transfer and Ezri Konsa at Villa’. Konsa has watched Tyrone Mings and Bjorn Engels establish themselves as Villa’s starting pair of centre-backs while Drmic has yet to start a Premier League match. Yes, he’s been unlucky with injuries, but that doesn’t get Dan off the hook.

Williams predicted ‘at least 12 goals this season’ from Che Adams, who needs just 12 goals in the second half of the season to prove him right.

Johnny had faith in both Andy Carroll and Ceballos, with neither proving themselves worthy. ‘Fabian Delph is a steal for Everton; Kieran Tierney will prove to be a bargain too,’ said Watson. Again, zero out of two so far.

Seb suggested that ‘£11m for Lloyd Kelly is hard to beat’ and long-term that might be right. But then he ruined it by declaring that Kelly ‘will play for England before the end of the season’.

Who will be named the PFA Player of the Year?
Only Seb chose a winner who doesn’t play for Manchester City but his choice of Harry Kane looks way off the mark.

Kevin De Bruyne got three votes which doesn’t seem so daft. At least not as daft as Stead’s sentimental selection of David Silva.

This one’s going to a Liverpool player, isn’t it…

First manager to go?
Top marks to Steady for predicting Javi Gracia’s demise. But Johnny wasn’t far off the mark either…

‘Call me insane if you want, but in my water I feel there is a good chance of major Spurs floppage in the first three months of the season. Any side that loses a third of their matches last season need serious improvement and it doesn’t look like happening, leading to poor early results and Poch basically saying to Daniel Levy “what do you expect, you tight get?” and an early jumping of ship, leading to a managerial sacking at Manchester United and installation of the former Spurs sex bomb in January.’

Roy Hodgson was the popular vote, with Winty observing that ‘he looks tired’. Which he has since the 1990s. But looks can indeed be deceptive since Palace are sat snugly in mid-table and Roy is among the more secure managers.

The Champions League winner, please…
All but three of us went for Manchester City seemingly on the basis that it is bound to happen sometime. Which might be correct but we haven’t seen much this season to suggest their time is now.

Seb was succinct in offering up ‘Barcelona’ assuming we all knew why, but Storey explained his preference for the sixth-favourites: ‘Juventus’s first-choice team is better than most of those above them and they should walk their league, which helps.’ Inter Milan might be a bigger distraction than Dan anticipated.

We wrapped with some whimsy. Here in five words, we explained what we were most excited about this season…
‘Not VAR, it’ll ruin everything,’ said Watson, proving that ingrained grumpiness and pessimism does occasionally have its uses.

Winty was excited over ‘football getting even bloody sexier’ though only she can say whether she’s more turned on now than last season. You can ask her…

Seb was certainly aroused by the smell of ‘burger vans and frying onions’ even if he can’t eat either while, sadly, Stead’s desire for ‘Neil Custis joining The Athletic’ is yet to be quenched. What are they bloody waiting for?

Storey was disqualified for breaking the rules and being an incurable romantic: ‘Living, laughing, loving. Some proper competition for the top six places, England’s young players at home and abroad in the build up to Euro 2020 and, on a selfish note, going to as many matches as I can. #Blessed’.

Blessed indeed. But not with any foresight, it would seem. Or the ability to count.