Home Arsenal Football365’s team of the week is here… 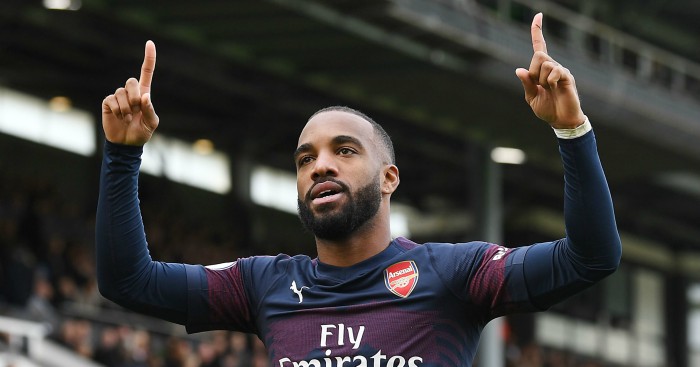 Last week we had an outstanding right-back performance (Pablo Zabaleta) which necessitated an ordinary left-back pick. This week there were no outstanding full-back or wing-back performances on either side of the pitch, so we’ve chucked the wide defensive players and gone with a narrow 3-2-3-2. Four teams wound up with multiple representatives:

Goalkeeper: Kepa Arrizabalaga (Chelsea)
Probably the thinnest week at keeper since this feature began. Neil Etheridge and Martin Dubravka made a fair number of saves but also left a fair number of rebounds, and Dubravka might have done better on at least one of Manchester United’s goals. The best save of all was a remarkable stop by Ben Foster from Callum Wilson, but he was otherwise a bit wobbly. So the winner is the Chelsea man, for two rather spectacular-looking leaps to deny Nathan Redmond and Danny Ings.

Not being reactionary but Kepa is the best GK in the world right now and easily top 2 ever GKs to play for Chelsea behind only Cech.

Before this weekend’s matches, I computed shot-stopping ratings based on Understat’s xG. Kepa actually ranked near the bottom. The leader? A hint: he’s had only one Premier League season with more than 30 appearances, back in 2011/12. Another: he’s an international keeper with more than 75 caps for a European nation. One more: he played in his first major international tournament in 2016. Answer at the end of the article.

Centre-half: Sean Morrison (Cardiff City)
A fine performance in the loss to Spurs. Sol Bamba has been more highly touted, but I’ll take Morrison, who’s more consistent and has better positional judgement. Against Tottenham he just got in the way of as many shots as possible, and cleared everything in the vicinity. He’s excellent in the air, and knows how to play to his strengths. A good defender.

Centre-half: Kurt Zouma (Everton)
Everton finally have a quality centre-half, at least for a year. Against Leicester he displayed all the abilities that have kept him on the books at Chelsea: pace, aerial prowess, marking. Assigned most of the time to Kelechi Iheanacho, he kept the Nigerian below a whisper. When Chelsea finally decide to sell, he’ll make a mid-table club one very capable defender. Why not Everton?

A few of the wide players deserve a shout. Matthew Lowton played good defence against Huddersfield: Rajiv van la Parra may not be the most intimidating of opponents, but Lowton kept him consistently at bay. I don’t know if Lucas Digne has enough pace to be a top Premier League full-back, but he has very good technique and is bedding in. Aaron Wan-Bissaka is slowly turning into a reliable, consistent player, and has that something special for the key moments.

Deep Midfielder: Jefferson Lerma (Bournemouth)
Now fully accustomed to the league, he looks like an excellent acquisition. Strong and mobile, and not bad with the ball at his feet either. Down a man and four goals, Watford kept attacking, so Lerma kept defending. A most impressive stat line: 83 touches (tops on the side), three tackles, two interceptions, seven clearances, four blocks, 89.7% pass completion. He’s 23. The Cherries’ problem position is a problem no more.

Deep Midfielder: Jonjo Shelvey (Newcastle United)
Co-man of the match despite the collapse at Old Trafford. Was at the centre of everything for his side, in attack and defence. Sometimes sat very deep, other times was effective charging forward. Got a characteristic set-piece assist. Managed a rare double, leading everyone on the pitch in both tackles and chances created.

Equally worthy was Paul Pogba, who had an ordinary first half, then drove the team forward superbly in the second. Got one assist and could easily have had a second. I love the way he pops up in the penalty area when he’s most needed, as with the pass out to Ashley Young just before the winning goal. Only lost out because he’d made the list already this season. Obligatory mention of the World Cup. Obligatory mention of the rift with Mourinho. Obligatory ARRRGH.

I was fortunate enough to be there for it, great watch. Less a game of two halves and more a game of two players, Shelvey controlled the first half & Mata the 2nd. It wasn’t about Pogba as MoTD claimed. Mata turned the match. Newcastle bench just not strong enough.

Attacking Midfielder: Gylfi Sigurdsson (Everton)
He started the match as a second striker alongside with Richarlison, but as things went on dropped deeper into his natural position. He’s such a smart player, such a hard worker too. The goal deserves all the headlines it got, but his runs, passes, and defensive work were class all afternoon. One of the players of the season so far. Winty wrote about him last week.

Ross Barkley scored a neat training-ground goal and had an excellent assist, but the video revealed how surprisingly little he contributed otherwise. I think he’s got quite a ways to go before he can play a key role in a Sarri attack. Hope I’m wrong, though.

Winger: Eden Hazard (Chelsea)
Somewhere around 1990, Dan Patrick, an ESPN sports commentator, popularised a humorous catchphrase for great players: “You can’t stop him; you can only hope to contain him.” It’s been that way for Eden Hazard this season. Southampton contained him after a fashion: one goal, one assist, a through ball for Alvaro Morata that should have been an assist, a through ball for Olivier Giroud that should have meant a penalty. Maybe the problem was that they fouled him only three times, and Barkley five. Incidentally, the Saints committed only 13 fouls, but got six yellow cards. Probably not a record, but well done Mark Hughes.

Winger: Bernard (Everton)
A devastating display, particularly in the first half, turning the right side of Leicester’s defence to jelly. He’s very quick to loose balls, and once they’re at his feet, he’s got moves galore. Wound up with more touches than anyone on the side except the defenders. You can’t stop him; you can only hope to contain him

Bernard’s 4 chances created from open play is the most by an Everton player in 2018 – over a year since anyone created more in a game for the club.

Striker: Alexandre Lacazette (Arsenal)
After his first match with Arsenal, I knee-jerked a prediction that he’d be a star in the league. Quite obviously it didn’t happen under Wenger, but it may yet under Emery. He really is the complete forward, and in a wide-open style, with plenty of teammates available for combinations, all his abilities come into play. Earlier this season I said he’d be best in a two-striker situation, so I can still be very wrong about him. But he’s hotter than Will Grigg right now. So is Pierre-Emerick Aubameyang, who had a half hour to remember. It helped that things were even wider open when he entered, but the guy just scores goals.

18 – No Arsenal player has had a hand in more goals in all competitions in 2018 than Alexandre Lacazette (14 goals, 4 assists), level with Pierre-Emerick Aubameyang (also 14 goals, 4 assists). Firepower. pic.twitter.com/6iFob3cXak

Striker: Josh King (Bournemouth)
Watford press high. Bournemouth have a dangerous counter-attack. Something had to give, and it was Watford, repeatedly. King was the pick of the attackers (and they were good), winning and scoring a penalty, heading home on one counter, robbed by Ben Foster of an assist on another. He’s been known to slow things down by excessive dribbling, but on Saturday he was direct as an electric current. Playing in a withdrawn role, and sometimes drifting to the wing, he doesn’t get that many shots; three of his four goals this season are penalties. But that’s fine, because he’s got Callum Wilson, Ryan Fraser and David Brooks sizzling alongside him.

Wilson played his part in the massacre, with a goal and assist. He’s been less than clinical so far this season, and also failed on two very good opportunities. But please, Gareth, please? Richarlison might have made the list if he’d played winger, but he looks like a natural up front. (Don’t ask Wes Morgan for his opinion.) It might be another Arnautovic-style transformation, and with Bernard now ready to claim the left-wing spot, we’ll probably see Richarlison in the middle for a while.

Elsewhere, we’re sometimes told that a player is ‘in the mood’. Glenn Murray was so in the mood that he might have been named Glenn Miller. Put himself about with abandon, and scored his second sweet technical goal of the season. Tied for second in the league in goals scored; two of his tallies are from the penalty spot, but the same is true of Eden Hazard and Harry Kane.

Oh, and the quiz. The top shot-stopper through the first seven games? It’s Wayne Robert Hennessey, of Crystal Palace and Wales. His only 30-match Premier League season was with Wolves, seven years ago.