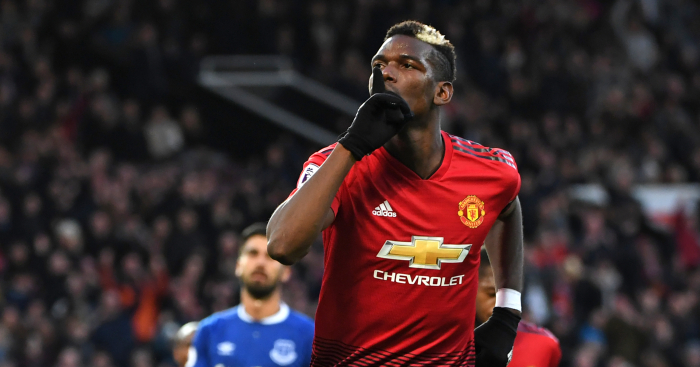 It was tempting to cheat this week, with three brilliant wing performances and none by a striker. I’m proud to say I resisted Successfully – if only it were the same with bad puns. An attack-minded 4-3-3:

Goalkeeper: Jordan Pickford (Everton)
A collection of good stops, including facing down Anthony Martial mano-a-mano, and of course the penalty save from Dame Margot Fonteyn. I still maintain he gives up too many rebounds, but those things happen on penalties. Ben Foster also gets a mention, not only for a couple of dazzling leaps but for one amazingly athletic bit of sweeping, given his age and the state of his knees. Joe Hart made three fine saves, but that old weakness, low to the left, bit him twice.

Right-back: Aaron Wan-Bissaka (Crystal Palace)
It’s time to say it out loud: right now he’s as good as any right-back in the league, and that includes Kyle Walker and Kieran Trippier. His defence has been unbelievable the last couple of weeks, with tackle after interception after clearance after whatever you need. At the moment he may go to ground a bit more than necessary, but he’ll learn. He also offers options in attack, not yet as assuredly as Walker, Trippier, and Trent Alexander-Arnold, but again, give him time. He turns 21 next month-may Palace hold onto him for many years to come.

Since making his Premier League debut, Aaron Wan-Bissaka has made more tackles (71) than any other defender in the division.

25 clear of the next player. pic.twitter.com/lZnzruI27k

Elsewhere, Matt Doherty had a fine match for Wolves at wing-back, with only the final ball missing. He’s solidly built, but his movement, and there’s lots of it, is as fluid as you could wish.

Centre-half:Lewis Dunk (Brighton & Hove Albion)
I slate him regularly for unnecessary risks, but against West Ham he stayed respectable and got just about everything right (one needless foul in a dangerous spot, once pulled out of position while marking). He was helped by Chris Hughton’s tactics: relatively conservative, without the increased pressing that characterized the Seagulls’ early matches. Plus, after the goal went in early in the second half, it was time to defend, so he had less need to come off the back line. When the chips were down in the final minutes, he was everywhere. Fine performance.

Centre-half: Federico Fernández (Newcastle United)
A bit of a thin week at this position; I thought Fernández was actually better a few weeks ago against Crystal Palace, but got crowded out then by Ryan Bennett and Fabián Balbuena. With Jamaal Lascelles making some uncharacteristic errors of judgment, Fernandez was steady and precise. He’s at his very best when roaming to cover for teammates, but here it was mostly sending things back where they came from. Southampton aren’t the most demanding of opponents, I’ll admit. As the saying goes, however, you can only make 14 clearances against what’s put in front of you.

Elsewhere, Tim Ream was very good until he belatedly remembered he played for Fulham, whereupon he found himself at fault for two Bournemouth goals.

Left-back: Joe Bennett (Cardiff City)
The toughest choice of the week. Alberto Moreno had a good attacking match, as did Ben Chilwell. But both had it relatively easy, the one home to Cardiff and the other against ten men for an hour. Moreno also was at fault for the Bluebirds’ goal. So it’s Bennett, who astonishingly becomes the eighth different left-back to make the list in only ten weeks. Played capable, error-free defence against Adam Lallana, Mo Salah, and Xherdan Shaqiri, before fading in the final few minutes.

Deep Midfielder: Lucas Torreira (Arsenal)
We’re finally getting the 90-minute look at him, and you have to like what you see. He’s not quite the destroyer that Matteo Guendouzi is, but his positioning, judgment, and passing instincts make up for it with interest. Against Crystal Palace he was a magnet for the ball, and released all sorts of Arsenal attacks with quick passes. My current favourite stat of the season: among players with over 300 minutes, Torreira ranks second (second!) in times fouled per 90 minutes, sandwiched between Eden Hazard and Wilfried Zaha. That’s because he gets to the ball ahead of everyone else. Side note: last week, every time I typed ‘Guendouzi’ into the comments, Vukkle rejected it.

Lucas Torreira is already one of the best defensive midfielders in the league, if not the best. Its insane how good he is. At times, he has carried our midfielder in terms of getting a foot in to tackle/intercept. And his passing is so underrated. One of my favourites already.

Elsewhere, Mousa Dembélé – who’s looked distressingly past his prime this year – delivered a younger man’s 75 minutes against Manchester City. Mario Lemina looked good for Southampton: alongside Oriol Romeu instead of Pierre-Emile Højbjerg, he took on a bit more attacking responsibility. A second look at the video revealed Fernandinho was wildly inconsistent in both attack and defence, but when doing the job was something to watch.

Attacking Midfielder: Paul Pogba (Manchester United)
You may have heard about it. An excellent match with a few blunders mixed in, probably not worth 600 articles and 25000 reader comments, but what can you do? Since he’s in the Team of the Week, let’s focus on the good stuff, of which there was plenty. He ran the match, with incisive passing from several different areas of the pitch. He also got into the box usefully several times. His assist for Martial’s goal may have been a bit lucky, but later he planted a cross right on the head of Romelu Lukaku and got nothing out of it. A telling contrast with the other attacking midfielder this week…

Attacking Midfielder: Ross Barkley (Chelsea)
Pogba directed the attack mostly by himself, improvising at will. Barkley played a clearly assigned role, spending almost all his time making the simplest of passes to the closest man, and emerged for two outstanding moments. I’m still a bit sceptical about his transformation. What makes Barkley special, or what could make him special, is the magic. At the moment he’s 93.8% water-carrier. That appears to have made him more confident when it’s magic time, but early days. Give him a couple of months before we stand and salute. By the way, that 93.8% wasn’t chosen at random: it was his pass completion percentage against Burnley. That’s brilliant, magic or no.

With one goal and two assists in @ChelseaFC's 4-0 win over Burnley, midfielder Ross Barkley is our Premier League player of the week, just edging out teammate Willian to top spothttps://t.co/BIw8fi1ept pic.twitter.com/c3sypxK5gk

Winger: Willian (Chelsea)
A runaway man of the match in the rout of Burnley. Pace, penetration, passing, and when it came to the goal, power and placement. Even the time he hit the post was impressive: he took the ball in stride, knew exactly what he wanted to do, set himself, and just missed. He had his 30th birthday in August, but doesn’t seem to have slowed down a bit.

Winger: Mo Salah (Liverpool)
And would you believe he slipped in on the newbie tiebreaker? Yes indeed, his first appearance on the list this season. The poacher’s goal and the pinpoint assists were a pleasure, and just as enjoyable was his overall sharp play. His best match of the season so far. If you’re keeping tabs, Understat has him at second in the league in expected goals and sixth in expected assists.

Odd man out was Roberto Pereyra, who was unplayable at times against Huddersfield, and unlucky not to get at least one assist to add to his goal. Also was robbed by Jonas Lössl in stoppage time. A few weeks ago I thought F365 overdid it in naming him the third best player in the league so far, but he’s been doing a darn good imitation lately. Only lost out because Willian and Salah hadn’t been on the list this year.

There were excellent wingers everywhere you looked. Just a little behind the top three was Sadio Mané, with two of the coolest finishes of the year. Ryan Fraser too, who’s having a wonderful season – here he kept the pressure on Fulham’s defence, then delivered two glorious through balls for assists. Naturally we won’t forget Anthony Martial, unleashed at last, not only to dive but to torment right-backs around the league. More, please. Riyad Mahrez had a pretty good match himself, with a goal and some excellent passing, but he’s raised the bar pretty high for himself lately.

Even two more: Moussa Sissoko rampaged for Spurs without an end product, and a special note for Marc Albrighton, who had his best game in quite some time. He can’t really run with the big names at this position, but he’s a trier, and when on his game can cross with almost anyone. An extra mention for Josh Murphy, not because he played well, but because I absurdly failed even to give him an honourable mention last week for his exciting show against Fulham.

Striker: Isaac Success (Watford)
The second straight ordinary week at this position, but take nothing away from the young Nigeria international (two caps). Watford normally press quite a bit, but they correctly expected Huddersfield themselves to press. So instead they held off and ran crazy on the counter-attack, with Success at the middle of it all. A bit erratic, but despite being regularly fouled, he created more chances than anyone on the team, and buried a late goal on the niftiest of set-piece routines.

Callum Wilson came just behind, winning and scoring a penalty and finishing off Bournemouth’s victory in style. Gerard Deulofeu, playing in a withdrawn role, was part of the Watford blitz, but despite scoring an early goal didn’t make the most of his opportunities. A nod to Glenn Murray for the most casual of finishes, which made eleven Wolves players look very surprised indeed.