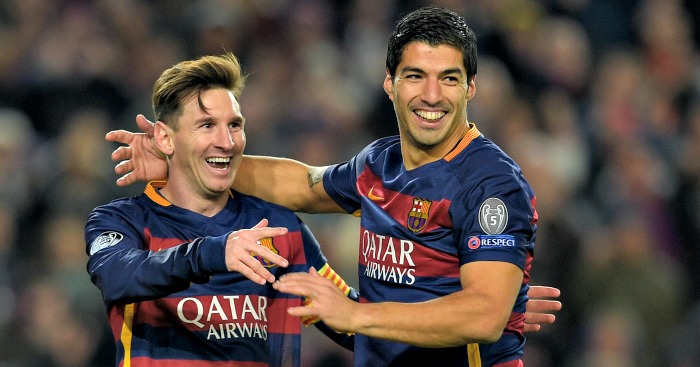 10) Paris Saint-Germain
Only just sneaking into the top ten given the resources on offer to Laurent Blanc, but there is no doubting Paris Saint-Germain’s all-singing, all-dancing 2015. They won both the French Cup and Coupe de la Ligue, but it is PSG’s form in Ligue Un that has been most dominant.

Having lost their first game of the year at Bastia, Blancs’s side have played 37 more league games since, losing only once. Their league record since mid-March reads: P28, W25, D3, L0, For 79, Against 18. PSG have also built up a 19-point lead at the top before Christmas. Fans of competition, look away now.

9) Sassuolo
When Sassuolo were promoted, the population of the town was smaller than seven of Serie A’s stadia. This was a small-town club in every sense of the word, expected to drop from whence they came.

Nothing of the sort. After finishing 17th in 2013/14 – surviving relegation by two points – Sassuolo were again in trouble after three months of 2014/15. They opened up 2015 with a win over Milan in the San Siro, and end the year a point behind Milan in seventh.

During 2015, Sassuolo have beaten Milan (twice), Inter, Napoli, Lazio and Juventus. Not bad for a team who only reached Italy’s third tier for the first time in 2006.

8) Borussia Monchengladbach
In February 2011, relegation from the Bundesliga seemed a formality for Monchengladbach. Yet the arrival of Lucien Favre, when the club were bottom of the table with 16 points from 22 matches, sparked a resurgence which finally peaked this year. The Foals finished third last season, their highest finish since the days of Allan Simonsen and Berti Vogts.

Unfortunately, that bubble looked like it had burst. Favre left in September with Monchengladbach back on the bottom and struggling in the Champions League. In stepped a new hero, Andre Schubert. Schubert has guided Monchengladbach back up to fourth, and a majestic year continues.

Those still unconvinced of the club’s merit in this list, hear this: Only nine teams have beaten Bayern Munich this year. Monchengladbach are the only team to do it twice. In their three matches against Bayern in 2015, the Foals have conceded one goal. You’d take that.

7) Watford
When Watford lost their first league game of 2015, they fell to sixth place in the Championship. Odion Ighalo started the game on the bench, Watford played 3-5-2 and the manager was Slavisa Jokanovic. Quite a lot can change in a year.

Watford’s promotion from the Championship was not in itself too noteworthy. They had finished third two seasons previously and were undoubtedly assisted by an ownership arrangement that allowed for players to move freely from Udinese and Granada. Yet nobody saw them taking the Premier League by storm.

Having won 13 of their last 18 league games last season, Watford promptly lost their manager after promotion. Quique Sanchez Flores has picked up where Jokanovic left off, and the Hornets are now one point from the Premier League’s top four.

6) Eibar
In a league where football is firmly skewed towards a financially-bloated elite, it’s nice to know that there are still feel good stories in Spanish football. With a population of 27,000 and a stadium capacity of 6,000, Eibar aren’t meant to host Real Madrid and Barcelona. It’s bloody great that they are.

Eibar were the smallest team in the Segunda Division in 2013/14, so 2014/15 always promised to be tough. When the club were relegated on the final day, with Deportivo earning a draw at Barcelona to stay up, the bubble had been pricked.

Well, not quite. By early June Eibar had been given a remarkable reprieve; Elche were relegated by the LFP over unpaid tax debts. The miracle continues.

You can read all about Eibar in this excellent book. It really is a wonderful story. http://www.amazon.co.uk/Eibar-Brave-Extraordinary-Ligas-Smallest/dp/1785310364

It’s easy to forget that Luis Enrique entered the year under pressure. Barcelona trailed Real Madrid by a point in La Liga having played a game more, and promptly lost at Real Sociedad in their first league game after the winter break. David Moyes’ Real Sociedad, no less.

Since then, Barca have hardly looked back. They promptly won 31 of their 35 matches in all competitions before the end of the season, and are now unbeaten in their last 16 games. Pep Guardiola isn’t the only one to create a golden legacy at the Camp Nou.

4) Ingolstadt
Tradition and heritage, that’s what we like in our football clubs. So when FC Ingolstadt reached the Bundesliga in 2015, 11 years after their formation, the temptation was to deem that as another billionaire’s plaything.

Well, not really. The headquarters of Audi are in the town – and the company has played a role in the club’s rise – but until this summer, Ingolstadt had only spent more than £500,000 on a player on one occasion. After winning the 2. Bundesliga, manager Ralph Hasenhuttl bought Elias Kachunga for £1.04m. It was the first time the club had paid more than £1m for a player.

They have gone from the fourth tier to the top in a decade, and yet Ingolstadt are not content with making up the Bundesliga numbers. They sit in mid-table in a tight division, seven points from the bottom and seven behind Bayer Leverkusen in fifth.

3) Angers
Having won promotion to Ligue Un last season, Angers promptly sold their top scorer to Bristol City for £2m. Jonathan Kodija has taken to life in the Championship, but Angers supporters must have been worried by the apparent lack of ambition.

Instead, Stephane Moulin opted to focus on his defence and has made Angers one of Europe’s most miserly teams. A record of 11 goals conceded has taken Angers up to third in Ligue Un, far beyond the most optimistic predictions. To put their achievement into perspective, Troyes were the Ligue 2 champions last season, finishing 14 points clear of Angers. While Troyes are bottom with eight points, Moulin’s side have 31.

“It really wasn’t easy to play,” said Laurent Blanc after Angers held PSG to a 0-0 draw. “If you put 10 opposition players in their own half of the field, if they are well organised and disciplined and pushed on by the home fans and are physically strong, I can tell you, it’s not easy to score goals.”

2) Gent
The only entrant from outside Europe’s major leagues, but a deserving inclusion. When the club won their inaugural Belgian title and qualified for the Champions League group stage for the first time in May, most would have been forgiven for assuming that their year had peaked. Not a bit of it.

Now with a five-point lead at the top of the Pro League, it is in Europe that Gent have raised the most eyebrows. Having taken a single point from their first three games, sitting miserably at the bottom of Group H, Hein Vanhaezebrouck’s side beat Valencia, Lyon and Zenit St Petersburg to qualify for the last-16.

The image below demonstrates Gent’s achievement in the Champions League. This is a club whose record signing Erik Johansson cost €2m.

1) Leicester City
There is a Wikipedia page dedicated to ‘doing a Leeds’, a bizarre ode to the modern trend of football clubs tumbling through the league due to financial clusterf*ck. It’s time to redress the balance. It’s time for ‘doing a Leicester’ to be celebrated in the annals of the internet’s most famous encyclopedia.

Leicester’s rise is almost comical. Were it to happen in a computer game context, the programmers would be mocked for their shoddy work. We are used to football clubs imploding, but moving from bottom to top is a far rarer journey than the vice versa.

Leicester were available at 5000/1 for the title at the start of the season. That’s 20 times shorter than the odds William Hill offer on Robbie Savage to be the next James Bond. Since the end of March they have played 26 league matches, and lost only two. This magical run may fizzle out soon, but that fails to alter its splendour.