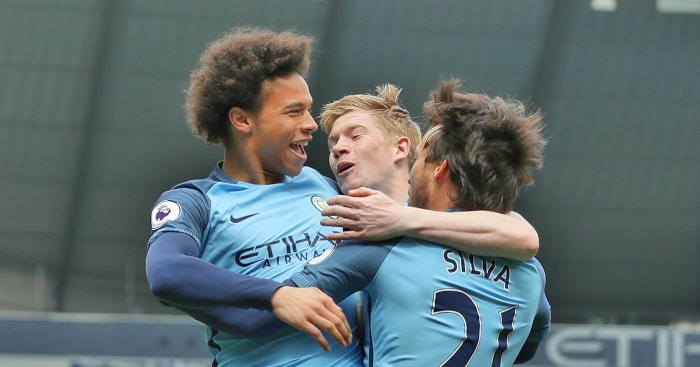 10) Leroy Sane (Manchester City)
Gary Neville had it right when he described how Leroy Sane has the makings of a “really special” player. If Pep Guardiola can harness his combination of pace, skill and power, Manchester City have a future star on their hands.

Sane’s inclusion on this list was in doubt at one point, and it took the impassioned pleas of Daniel Storey, merged with my subsequent desperation to silence him, that saw the City winger emerge as a late replacement for the previous 10). It was never my intention to betray you, Michail Antonio.

It is just a shame Sane has only started 17 Premier League games, but he has shown enough in his debut season to prove that he has a prosperous future. That his summer transfer fee – £37million – is now so rarely mentioned in relation to his performances tells its own story of a player who has shown every sign of living up to the valuation. At least.

9) Wilfried Zaha (Crystal Palace)
If any player has truly restored their reputation this season, it is Wilfried Zaha. Many rushed to the snap judgement that he was simply not of the requisite standard when his big move to Manchester United ended after just four appearances over two seasons, ignoring the difficulties of acclimatising to new surroundings, particularly when said surroundings are governed by David Moyes. Last season was a small step in the right direction of an arduous journey. This campaign has been a giant leap, and Zaha has ensured that his response will define his career, not any previous setback.

The 24-year-old has matched his career-best total for league goals – six – while setting a personal record for league assists – 11 – this campaign. He was inspirational in victory over Chelsea and unmatched in the defeat of Arsenal, and has played an integral role in (probably) maintaining Palace’s league status.

Zaha has shown he can work under two diametric opposites on the sliding managerial scale – Alan ‘the expressionist’ Pardew and Sam ‘the pragmatist’ Allardyce – and his work-rate, attitude and output has noticeably improved. He has also completed 140 dribbles in the league this season, which is more than every player in Europe’s top five leagues except for Allan Saint-Maximin (141) and Neymar (161).

8) Kevin de Bruyne (Manchester City)
Pep Guardiola has, on more than one occasion during a difficult first season in the Premier League, looked back to one particular Manchester City fixture with regret.

“I saw the game many times,” he said just last month. “We were much, much better. I’m sorry Antonio but we were, we deserved to win.”

Within that result came one moment that might well have shaped City’s season. Guardiola’s side were leading Chelsea 1-0 at the Etihad Stadium in December, and Kevin de Bruyne was provided with an open goal in the 57th minute. A victory would have ended Chelsea’s winning run at seven games and put City two points clear at the top. He hit the crossbar, Chelsea equalised three minutes later, and the Blues would go on to win 3-1.

15 PL assists now for De Bruyne. No player has hit woodwork more. Still a very good season but with more luck could have been sensational.

City’s form tailed off after that demoralising defeat, but it had a far greater impact on De Bruyne than anyone could have predicted. He was perhaps the best player in the country beforehand, but struggled for consistency thereafter. Yet only one player in Europe’s top five leagues (Emil Forsberg, 16) has more assists than his 15.

Think of the Belgian’s inclusion in this list as similar to Mesut Ozil’s last season: A poor second half of the campaign should not overshadow an excellent first few months.

7) Pedro (Chelsea)
When discussion turns to Antonio Conte’s ability to maximise the hand he is dealt, rather than simply spending money on a whole new deck, the form of Victor Moses is invariably held as the shining example. Here is a player unloved and discarded by numerous former managers, but who is a vital cog in a Conte machine charging towards the Premier League title.

A player often overlooked in that regard is Pedro. Jose Mourinho described him as “one of the best attacking players in the world” when he joined in summer 2015, but the winger was one of the many victims of a difficult season. His form was poor, his fitness lacklustre, and his future uncertain.

Cue Conte, and another one of his success stories. Pedro has kept Chelsea’s best player of last season, Willian, on the bench as he has flourished as a wing-back when needed, but as a forward most often. Eden Hazard and Diego Costa have been fine main protagonists, but few of the supporting cast have had a bigger impact than Pedro.

6) Gylfi Sigurdsson (Swansea)
There is absolutely nothing wrong with being a big fish in a smaller pond. That Gylfi Sigurdsson struggled when surrounded by sharks in a vast ocean at Tottenham should be tempered by the fact that he has thrived in a puddle at Swansea.

The Iceland international will surely leave the Liberty Stadium in the summer, but Swansea will begrudgingly accept that their most prized asset has outgrown them. The Welsh side have an unlikely chance of securing Premier League survival thanks in no small part to their Gylfi pleasure.

Sigurdsson has nine goals and 12 assists for a relegation-threatened side from attacking midfield. Swansea’s 1-0 victory over Everton last weekend was their first Premier League win in which the 27-year-old had not either scored or assisted since the opening day. This is a player who will feature very highly on a number of transfer wishlists this summer.

@RBMersey Sigurdsson. He brings goals, assists, free kicks, and good work rate. Interested to see if a such a purchase could convince Lukaku to sign.

Replacing any of the club’s most important figures in recent history will be difficult, but not impossible. Finding a successor for perhaps their best player ever is a thankless task. But for now, the Etihad Stadium is privileged to enjoy the stylings of an individual whose nickname of ‘El Mago’ is, if anything, underselling his capabilities.

Put simply, David Silva is intrinsically linked with City. When he plays well, Pep Guardiola’s side prosper; when he is enduring an off-day or is targeted and nullified by an opponent, they struggle. This is The Magician’s seventh consecutive season of Etihad excellence, yet he remains as criminally under-rated as ever.

4) Sadio Mane (Liverpool)
It would require a monumental (and therefore hilarious) collapse for Liverpool not to qualify for the Champions League at this stage, but there was a time this season when it looked as though the Reds were on course for so much more.

Before January, Liverpool were a free-flowing attacking unit capable of dismantling any defence. After beating Manchester City on New Year’s Eve they sat second in the table, with more goals than any other side.

Then they lost Sadio Mane to the Africa Cup of Nations. Liverpool did not win any of the three games the winger did not start in January, and a title challenge was relegated to a top-four push. They look to have salvaged Champions League qualification at this stage, but Mane’s absence truly hurt them. They have scored 2.23 goals and earned 2.15 points per game in his 26 Premier League starts, and score one goal and earn 1.2 points on average without him.

3) Christian Eriksen (Tottenham)
Very much the heir to the David Silva throne of undervalued genius, Christian Eriksen is, according to Mauricio Pochettino, “a player that does not need too much the feedback of the fans, the media and the people outside”.

In an interview last month, his manager went on to note that the playmaker “does not need to be recognised”, but it would be a travesty to neglect the continued improvement of a delightful player. Tottenham’s headlines are often reserved for their young, homegrown talent or their small collection of elder statesmen, but a Dane who only turned 25 in February has earned his plaudits.

Extraordinary season from the Dane. pic.twitter.com/Mvk2SB809a

2) Dele Alli (Tottenham)
Five of our top ten attacking midfielders of last season have been named on this list. Most have improved on their positions, with Mane, Sigurdsson and Eriksen all finishing higher. One, De Bruyne, has regressed slightly in comparison.

Alli finished runner-up last season to the most influential forward for the champions. Chelsea require three points from three games to secure the Premier League title, and so history looks likely to repeat itself 12 months on.

But that should not detract from yet another remarkable year from Alli, who has followed Tottenham teammate Harry Kane in proving he is no one-season wonder. There are flaws in his game, but few would argue with a combined return of 43 Premier League goals and assists in 67 matches.

1) Eden Hazard (Chelsea)
It was Riyad Mahrez who toppled Alli in last year’s list, and the Englishman can count himself unlucky that Eden Hazard has rediscovered his verve this time around. One of the chief ‘rats’ who brought about Jose Mourinho’s demise has once more become the mouse who has taken the mickey out of many a Premier League defender.

Hazard looks likely to miss out on individual honours as the country embarks on a new fetish for central midfielders, but no-one has played a more important role in Chelsea’s return to the summit. That Antonio Conte affords his Belgian the freedom of the pitch in an otherwise structured, organised system speaks volumes.

It is no coincidence that Chelsea’s worst performance of the season came when an opponent built their approach around silencing Hazard. When Manchester United hosted the Blues last month, their tactic was to nullify Hazard first and ask questions later. His is the sort of talent any opposing player or manager fears.

Most striking, aside from his 15 goals and five assists this season, are his performances in important games. No player has scored more goals against the current top six (5), and the quality in each of his strikes only seems to increase. Last season was a blip. This is Eden Hazard’s world; we all just live in it.