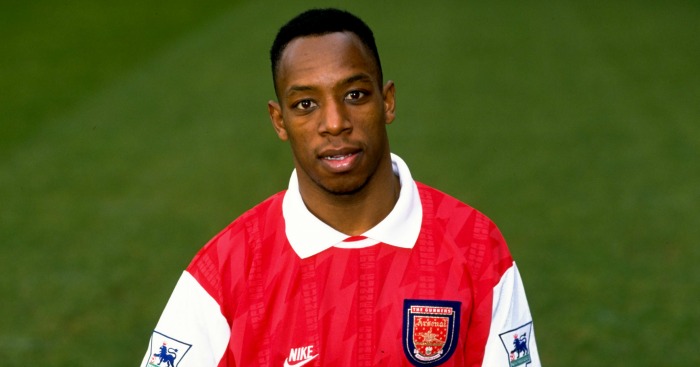 NB: I wanted to get Antonio di Natale into this list more than you wanted me to, but late starter is not the same as late bloomer. Sorry x

10) Chris Waddle
Waddle’s list of clubs before finally signing for Newcastle reads like something out of the Tyne and Wear version of There’s Only One Jimmy Grimble: Pelaw Juniors, Whitehouse SC, Mount Pleasant SC, HMH Printing, Pelaw SC, Leam Lane SC, Clarke Chapman, Tow Law Town. Waddle was almost 20 before he turned professional, working in a food processing factory to pay his way.

“I never made sausages, just the seasoning,” Waddle clarified in an interview with FourFourTwo in 2008. “The press said I worked in a sausage factory for the headline writers. So if I was playing badly I was having a ‘Banger’ or if I was playing well, I was ‘Sizzling’. As for vegetarian sausages, I think they’re a complete waste of time.” So now you know the answer to the question ‘Did Chris Waddle make sausages, or just the seasoning?’

9) Les Ferdinand
Les Ferdinand is a trailblazer. Yes, you read that right, a bloody trailblazer. A young footballer leaving West London to go on loan to a European club might be an embarrassingly frequent occurrence now, but years before Izzy Brown, Lewis Baker, Andreas Christensen and Tomas Kalas were even born, Ferdinand was making the move.

Everything started slowly for Sir Les. He only moved to QPR from non-league Hayes at the age of 20 to sign a professional contract, but managed only three first-team games before 1988. About to turn 22, Ferdinand made the bizarre move to Turkish side Besiktas on loan, where Englishman Gordon Milne was manager.

“I didn’t go through the normal route whereby you have an apprenticeship and then you work your way through the apprenticeship,” Ferdinand said. “I came into QPR as a pro (from Hayes) so I really think I needed to learn my trade. I see me going to Turkey as my apprenticeship in football.”

Ferdinand scored 14 league goals in 24 games in Turkey, won the domestic cup, came back to England and embarked on incredibly successful domestic career. It was the making of him.

8) Dado Prso
A slight cheat, Prso actually played for one season at Croatian side NK Pazinka at the age of 18, before dropping off the football radar. He played as an amateur for FC Rouen and Stade Raphaëlois in France until turning 22, when Monaco coach Jean Tigana noticed him.

Twice loaned out to Ajaccio in the third and second tier, Prso finally made his top-flight debut in France just before turning 25. That season he won the league title, before leading Monaco to the Champions League final in 2004.

Most players who start late play long into their 30s, but Prso is the exception to the rule. Retiring in 2007 at the age of 33 meant that the Croatian had just over ten years as a professional. An international striker, his entire top-flight career consisted of 59 league goals. Harry Kane needs 11 to beat him.

7) Kevin Phillips
Having been released by Southampton after six years at the club and without signing a professional deal, Phillips thought his chance as a pro had gone. Considered too small to play as a striker, he was picked as a right-back in Southampton’s youth teams and then also at Baldock Town at semi-pro level.

“We were struggling for a centre-forward one game and I put my hand up and said I’d have a go because that is what I always wanted to do,” Phillips recalls. “I played my first game, scored two goals and never looked back, it was a lucky opportunity that came through injury. We needed someone up there so I volunteered.”

Finally signing his first professional deal at the age of 21 with Watford, Phillips used his slow start to play on into his 40s. He played his final game as Leicester celebrated promotion to the Premier League in 2014, but never again at right-back.

6) Stuart Pearce
Turned down by QPR at 13 and a contract offer from Hull rejected at 17 on the grounds of geography, Stuart Pearce was hardly close to being a professional footballer at the age of 19, training as an electrician and playing part-time.

“You don’t go, ‘Hang on, I work I a warehouse down in Stonebridge now. I hope I’ll be a professional footballer tomorrow.’ You just don’t think that,” Pearce said in a FourFourTwo interview years later. “I used to play centre-half and didn’t really play left-back until I left school, so maybe I was playing in the wrong position at first. Plus I was small and didn’t really grow until I was 18 or 19.”

Playing for Wealdstone, an offer from top-flight Coventry came out of the blue. Pearce stepped up from the Alliance Premier League to the First Division overnight, and immediately made his debut. The electrician work would famously continue on the side well into his Nottingham Forest days.

5) Miroslav Klose
Miroslav Klose is a bloody hero. No arguments, no dissenting voices, no non-believers. Reading his surname alone might be enough to have that Rosie Gaines’ dance floor banger in my head for days, but you can’t blame anyone but Rosie for that.

Klose’s career is so extraordinarily weighted towards his latter years that it makes you giggle. He had scored 40 club goals before turning 25, and 192 since. That’s in part due to his slow start, with Klose training as a carpenter before turning professional at the age of 20. Fair to say he made up for lost time.

4) Jamie Vardy
Stop me if you’ve heard this one…OK, you really have heard this one before. It’s potentially going to be the subject of the worst film you’ll ever see, with the lead role played by a member of One Direction.

At the age of 16, Vardy was released by Sheffield Wednesday, and didn’t break into the first team at non-league Stocksbridge Park Steels until the age of 20, when he earned £30 a week to play. By the age of 23, Vardy was moving on to Halifax Town in the Northern Premier League, where the goals continued to flow.

You can dislike Vardy for his past behaviour, but you can’t fault how impressive his rise through the divisions has been and how impressively the striker has flourished after each step up. To only make your Football League debut five months short of your 26th birthday and yet be playing international football less than four years later is ludicrous. In a world of homogenised academy talent sculpted in plastic centres of Premier League excellence, there is another way.

3) N’Golo Kante
Claudio Ranieri might have accused Kante of failing to heed his advice about Leicester’s squad sticking together for one more season, but you can hardly blame the midfielder for wanting his big-money, big club move. Kante has had to squeeze his development and rise into a short time period.

Having started his career at amateur club JS Suresnes, Kante only made his professional debut at Boulognes at the age of 21, on the final day of 2011/12 as his side had already been relegated. Having played in the third tier the following season, Kante joined Ligue 2 Caen in the summer of 2013.

Watching Kante last season for Leicester, that all-tackling, all-running livewire who should have been named Player of the Year, it is astonishing that his first top-flight league game came in August 2014. Exactly 50% of Kante’s top-flight career matches came last season. Bloody hell.

2) Didier Drogba
Born in Abidjan, Ivory Coast’s capital, Drogba was sent to live with an uncle in France at the age of five who was professional footballer. Wrought with homesickness, Drogba moved back home three years later and played football only with friends. Having moved back to France at the age of 11, Drogba’s body had not been trained for the rigours of regular football, and it took him years to develop his famous physicality.

“It took Didier four years to be capable of training every day and playing every week,” former coach at Le Mans, Marc Westerloppe, said. Drogba didn’t sign a professional contract until the age of 21, and didn’t play his first top-flight match until two months before turning 24.

1) Ian Wright
I’ve hugely warmed to Wright over the last year or so. For while other notable pundits manufacture their passion and excitement to try and stand out from the crowd in some lame ‘he who shouts loudest wins’ contest, Wright’s passion is genuine.

Part of the reason for the former Arsenal striker’s demand that England perform to the best of their ability is that Wright realises how fortunate they are to get such an opportunity. Having been rejected by Southend and Brighton as a teenager, Wright did everything he could to get noticed. He was finally signed by Crystal Palace shortly before his 22nd birthday after playing for several amateur and semi-professional clubs.

Six years later Wright was signing for Arsenal for a club-record fee, had scored enough goals to later be named Palace’s Player of the Century and made his England debut. Despite scoring 208 league goals in 12 seasons between 1986 and 1998, Wright started only seven competitive games for England, plus two more in Le Tournoi. Those times are precious.