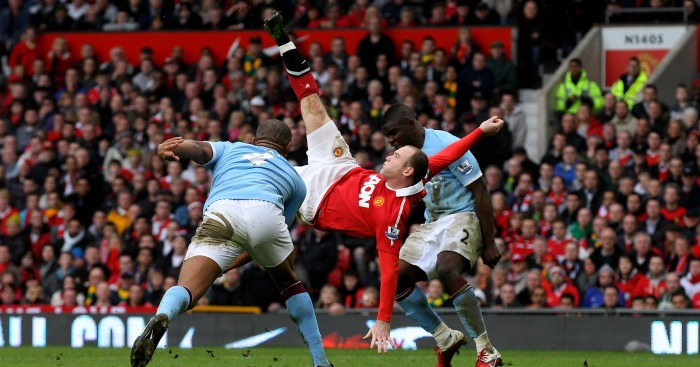 We actually did this top ten in 2014, but a) it got lost in the ether of the internet and new sites, b) opinions change, goddammit, and c) there were two overhead kicks this weekend in the Premier League. Also, we can do videos now like it’s the year 2000 or something…

10) Peter Crouch (Liverpool v Galatasaray, 2006)
No it isn’t the best overhead kick goal (well obviously, it’s at No. 10). And no, if this list was judged purely on aesthetics it wouldn’t make the grade, but there is something incredibly endearing about the weirdness of Peter Crouch scoring a fabulous overhead volley. As Karl Pilkington would say, it’s like seeing an old man eating a Twix.

The 2006/07 Champions League was probably the peak of Crouch’s domestic career, with only Kaka beating his total of six goals in the tournament proper. The pinnacle was his second in a 3-2 victory over Galatasaray, described by the Guardian’s Dom Fifield as ‘an elastic right-footed scissor-kick’. Crouch resembled a break-dancing daddy-long-legs as he somehow kept his elongated frame in mid air for long enough to connect with the ball perfectly and guide it into the corner.

9) Karl-Heinz Granitza (Chicago Sting vs Tulsa Roughnecks, 1983)
I don’t want you to know how long it took me to confirm the Sting’s opponents for Granitza’s late, late overhead kick in 1983, and I certainly don’t want Sarah Winterburn to find out. Having started the search, it became my nemesis. I finally tracked down an online version of the Chicago Tribune from July 1983 which referred to the goal in a subsequent match report. It’s exactly what Tim Berners-Lee had in mind.

Granitza’s goal is not included for its style but novelty value. In the North American Soccer League (NASL), matches were played to the exact second of 90 minutes, ended by a hooter. With ten seconds remaining, the goalkeeper launched the ball downfield, and Granitza did his thing. The Roughnecks (Roughnecks!) would gain their revenge, beating the Toronto Blizzard in Soccer Bowl ‘83 to end the season as champions.

I can’t recommend highly enough Youtube user ‘soccermavn’ and his NASL video library. The pitches look like Subbuteo incarnate, the pitch markings are drawn in an indistinguishable orange paint against the NFL markings, and some of the football is laughable. This was a time when teams would compete in an indoor league during off-season. Get on that.

8) Wayne Rooney (Manchester United vs Manchester City, 2011)
Life hack: Sort out the people who aren’t worth hanging out with according to those who say Rooney’s Manchester derby overhead kick wasn’t a great goal ‘because he shinned it’.

The saddest thing about Rooney’s outrageous overhead kick winner is the commentary on the video. It describes a striker at the top of his game, not a puffing midfielder desperately searching for what once was but never will be again: “Rooneeeeyyyy! Oh. Wonderful. What a goal. At what a time. In what a place. By what a player. Wayne Rooney: Out of this world.”

It just makes me want to give him a cuddle and tousle his manufactured hair.

7) Manuel Negrete (UNAM v Puebla, 1985)
Right, now we’re cooking on gas. Self-created volleys are usually a no-go for this discerning overhead kick aficianado, but this list does make a few notable exceptions. The first is Negrete’s goal in a Mexican league game for UNAM Pumas against Puebla, which involved him chesting up a cross, flicking the ball over his head, nodding it up and volleying it home.

Of course the best moment is the impish little header, but the whole thing is like watching a footballing representation of the first five seconds of Bert’s one-man band trick in Mary Poppins.

Negrete’s goal is made all the better by the knowledge that it wasn’t a fluke. He did this for Mexico in the World Cup 18 months later.

6) Rivaldo (Barcelona v Valencia, 2001)
Cometh the man, cometh the hour. Football does a good line in moments that persuade you to believe in fatalism, but in June 2001 Rivaldo gave fate a forceful shove in the right direction.

With Barcelona needing victory over Valencia to qualify for the Champions League, Rivaldo scored a free-kick and then a drive from 25 yards, but still his side were falling short. As the clock ticked closer to the 90-minute mark, Frank de Boer played the ball into the Brazilian, who somehow chested the ball high enough to give him enough time to plant his feet and jump into an acrobatic volley.

“A goal in a million, to earn many, many millions next season,” the Sky Sports commentator said. It’s a hell of a line.

5) Marco van Basten (Ajax v Den Bosch, 1986)
It was only a matter of time before the most talented centre forward in the history of the game took his place in our list. The only question was which Van Basten overhead kick to choose: Milan vs Gothenburg or Ajax vs Den Bosch.

In the end, I went with the latter purely for reasons of camera angle. It’s actually very rare that you get the best view of a goal on first viewing from the comfort of your home, with slow-motion replays usually needed to enhance the experience.

Van Basten’s goal in 1986, his most famous in that gorgeous Ajax shirt, was a glorious exception to the rule. You know it’s in before the goalkeeper does (and yes, that does make no sense when watching it 30 years after the incident).

4) Zlatan Ibrahimovic (Sweden v England, 2012)
I don’t like Ibrahimovic. Plenty see his arrogance and “I am Zlatan” persona as amusing or even endearing, but it grates on me and comes across as manufactured schtick. His autobiography is filled with tales of him speeding away from the police because he wanted to show them he couldn’t be caught; these are the anecdotes of a bell-end.

However, there is no doubt Ibrahimovic backs up that ego with his ability. Never has that natural talent and vision been better summed up than against England in November 2012, the night of Ryan Shawcross, England international. The ball was headed clear by Torino hall-of-famer Joe Hart, and Ibrahimovic met it with an overhead scissor kick that owed much to his martial arts training. The only possible response was to sit with open-mouthed wonder.

Still, rules are rules. Ibrahimovic was booked for removing his shirt. Don’t hate the referee, hate the laws.

3) Mauro Bressan (Fiorentina v Barcelona, 1999)
Given the progression of modern media (and this is an observation, not criticism), certain players have become ‘list legends’, famous for one moment in their careers that is replayed on loop. Hell, we even created a top ten of those players. Mauro Bressan was shortlisted, receiving an honourable mention, but missed out on a place. His time is now.

Bressan’s goal is worthy of lofty praise for three distinct reasons. The first is the power generated on his overhead kick, without the usual assistance provided by a driven cross into the box a la Crouch, Rooney or Van Basten. The second is the distance, earning the Italian added marks for impudence as well as application. The third is the minutiae of the goal: The ball going in off the underside of the bar; the goalkeeper tangled up in a wonderful Serie A goalnet; that ‘Fila’ Fiorentina kit (unfortunately just after the days of Nintendo sponsorship).

In fact, the only thing going against Bressan’s goal is that it is a little too alternative to be considered the best. Innovation isn’t everything, you know.

2) Eliran Atar (Bnei Yehuda v Maccabi Netania, 2009)
Some goals on this list were included for the stage on which they were cast; with Eliran Atar, it’s all about the goal. I really could watch it all day long.

Nominated for FIFA’s inaugural Ferenc Puskas award in 2009, Atar finished fourth behind Cristiano Ronaldo and Andres Iniesta’s Champions League knockout goals and Grafite’s strike for Wolfsburg against Bayern Munich. Had either of those three scored Atar’s goal, which came in an Israeli league game, they would have walked it.

Note the confusion on the goalscorer’s face as he struggles to comprehend his own brilliance. Note the way his teammates each celebrate as if they have scored the goal, simply because they are so stunned by the result. Note the way the manager of the goalscorer looks broken by disbelief, while the opposite manager just smiles dolefully. Especially note the way the ball comes ball out of the goal, instantly adding ten ‘good goal’ points. Outstanding.

1) Trevor Sinclair (QPR v Barnsley, 1997)
For those of a certain age, our footballing infancy is held up by a number of distinct moments. As time erodes away at the long-term memory, these moments are reduced in number to several pillars. These are the memories of which the clarity will never dissipate, even 20 or 30 years down the line.

Trevor Sinclair’s overhead kick against Barnsley 1997 is one of those pillars. It came in an otherwise forgettable FA Cup fourth round fixture at Loftus Road, and did not spark any run to Wembley. Yet I still remember sitting in the living room on that Sunday morning, watching Match of the Day on record and seeing that goal. The attempt alone is outrageous, but the result is unfathomable.

To a generation of fans, Sinclair was a shaven-headed midfielder that England took to World Cup 2002 and later played out his career at Manchester City. To those aged 28-35, he was a dreadlocked winger who scored one of the goals of our childhood. Find yourself a video with only the crowd noise, and just listen to the amazement.