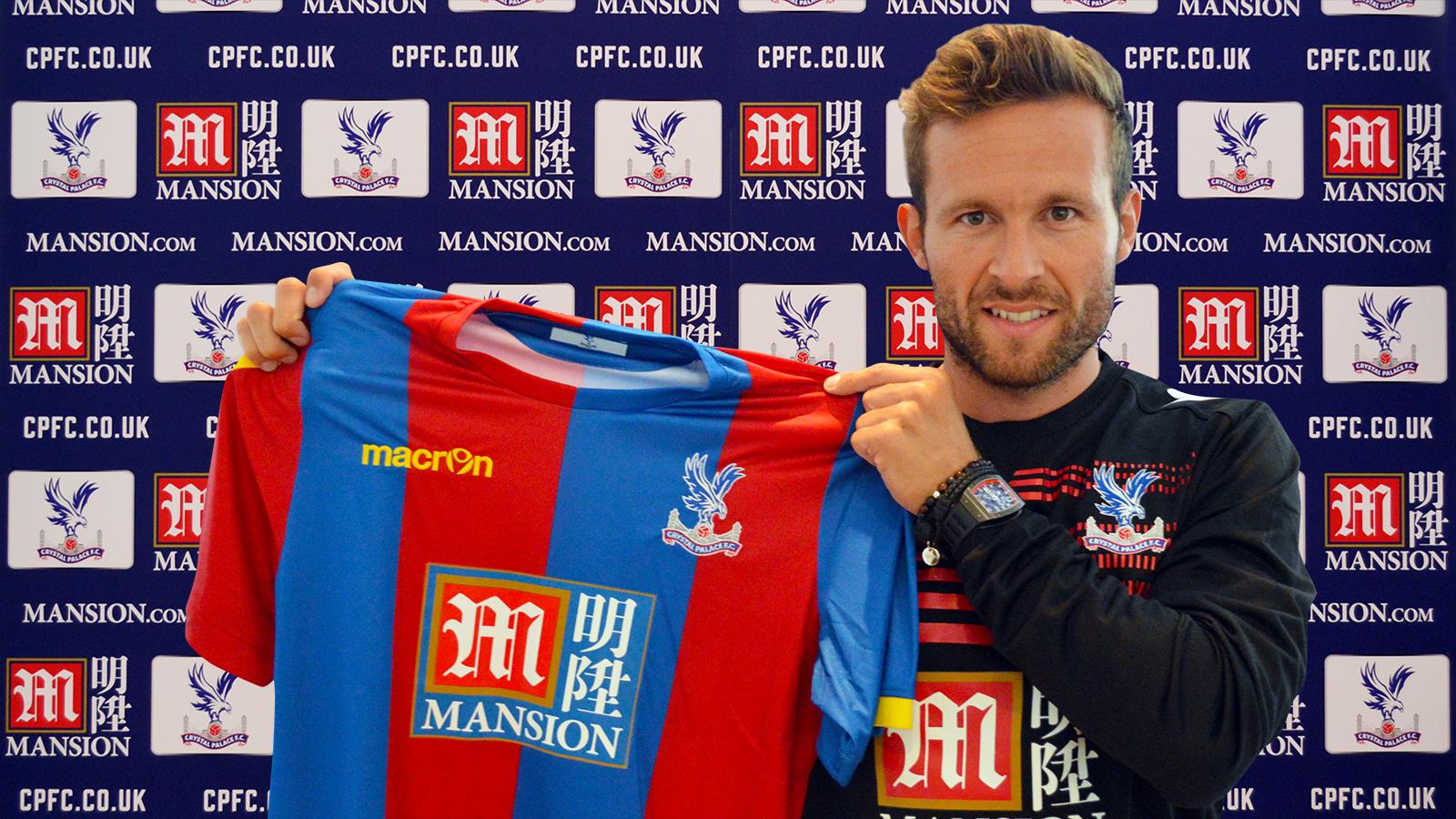 Having been suitably impressed by Crystal Palace signing world handsome champion Yohan Cabaye, here are ten of our favourite transfer coups. Enjoy away…

Tottenham were one of those predicted to follow up an interest in the French international this summer, with PSG keen to offload their £19m signing. West Ham had also been linked during their most ambitious summer of recent times, but little old Palace? Not a chance.

Yet so it was. The 29-year-old’s relationship with Chunky Alan Pardew was the deal-maker, and Palace snared a man who won the treble at the Parc des Princes in his last season. From Zlatan Ibrahimovic to Connor Wickham in one fell £10m swoop.

9) Sol Campbell (Notts County)
“I was being a mug” was the frank self-assessment of Sol Campbell’s ill-fated spell at Notts County in 2009. A season after winning the FA Cup with Premier League Portsmouth, the England international saw fit to drop down three divisions to join League Two County.

Just three years removed from his Arsenal departure, and two after winning his final cap for the Three Lions, Campbell was enticed to Nottinghamshire after Middle Eastern consortium Munto Finance had completed its takeover. With Sven-Goran Eriksson installed as director of football, County had become the latest project before football projects were even a thing.

What followed was a 2-1 defeat to Morecambe on his debut, which proved to be not only his first but his last appearance for the side. Three days after the opening day loss he had walked out on the club, with Munto themselves proved to be little more than a fabricated sham.

8) Ruud Gullit (Chelsea)
Three Eredivisies, three Serie As, back-to-back European, Super and Intercontinental Cups, a European Championship, two Dutch Footballer of the Year awards and a Ballon d’Or. Ruud Gullit may have been 32 by the time he joined Chelsea, but his honours list made for stunning reading.

Signed on a free transfer from Sampdoria after spells at Feyenoord, Milan and PSV, the Dutch midfield master took time to adjust to the Premier League, but finishing runner-up in the Footballer of the Year award to Eric Cantona points to a star still burning brightly.

Glenn Hoddle and Chelsea beat off competition from Bayern Munich to snare the midfielder, who paved the way for the Premier League’s foreign influx. Gullit enjoyed a mixed spell when installed as manager at Stamford Bridge, but his indelible mark on the club was made as a player. Gullit brought flair to the Bridge.

7) Robinho (Manchester City)
Today’s norm is yesterday’s befuddlement. Eyelids are no longer batted at Manchester City breaking British transfer records, nor would the football world be stunned if Manuel Pellegrini were to sign a superstar from Real Madrid. Back in 2008 however, this was big, big news.

For months it had looked as though Chelsea would complete a deal to sign Robinho, 24. Talks had been ongoing between all parties for months, with fellow countryman and Blues boss Luiz Felipe Scolari desperate to sign the superstar.

But the deal had hit a snag. Chelsea’s conduct during discussion had reportedly angered Real chiefs, and the move was under threat. Out of nowhere, Manchester City – who had earlier in the day announced a takeover bid from Abu Dhabi United Group – swooped in and stole their very first Galactico.

Robinho’s move may not have gone entirely as planned, but it acted as a precursor for the club’s rise to Europe’s top table.

Imagine a scenario whereby Bournemouth signed a multi-time Serie A champion and recent Champions League winner from Juventus. Unheard of, you’d think; Palace did it 18 years ago.

After two successive Champions League finals with The Old Lady and a litany of titles in Italy, 31-year-old Lombardo swapped Europe’s top table for newly-promoted. Where Gianluca Vialli, Ruud Gullit and Alessandro Del Piero once welcomed him at Sampdoria and Juventus, Michele Padovano and Tomas Brolin provided the continental flair.

Predictably tipped for an immediate return to the First Division, Lombardo helped Palace defy the critics early in the season, leading them to tenth as late as November. His excellent form earned him a recall to the national side, but on Azzurri duty Lombardo picked up an injury which would rule him out until April.

The club won once in his absence, and relegation was confirmed with Lombardo at the helm two games into his return. A place in Palace’s Centenary XI despite making just 49 appearances for the club might have softened the blow.

Across spells for Stuttgart, Inter and Monaco, Klinsmann’s 143 league goal haul in 10 seasons provided the platform for a groundbreaking move to Ossie Ardiles’ Spurs. A world and European champion with West Germany and Germany, the 30-year-old was recognised as a fine talent – “one of the best in the world,” according to manager Ardiles – after finishing as the joint-second top goalscorer in that summer’s World Cup.

A reputation as a serial diver would be difficult to shake off, but a simple quip from Klinsmann at his press conference unveiling helped heal his relationship with the country.

“Maybe I can ask you the first question. Are there any diving schools in London?”, was the German’s opening gambit. Following it up with the famous swan dive celebration after a goalscoring debut against Sheffield Wednesday meant Klinsmann had already won over the majority of his critics.

An eventual tally of 30 goals in 50 appearances meant Klinsmann’s first brief stay was a memorable one, particularly after being crowned Footballer of the Year. The German claimed bronze in the 1995 FIFA World Player of the Year award after departing for Bayern Munich, further testament to his immense quality.

4) Juninho (Middlesbrough)
This spot could easily have been taken by another of the Teesiders’ mid-90s imports in Fabrizio Ravanelli or Emerson, but ask any Boro fan and it’s Juninho who gets their seal of approval.

A £4.75m signing by Bryan Robson in October 1995, Juninho joined after winning the Copa Libertadores with Sao Paulo. Tracked by Europe’s biggest clubs, promoted ‘Boro somehow persuaded the diminutive 22-year-old to join them instead.

Now regarded as one of the greatest players in the club’s history, the Brazilian would go on to claim World Cup glory with Brazil. That prize sits proudly alongside his 2004 League Cup winner’s medal, won during his third spell at the Riverside.

On one side was 22-year-old striker Carlos Tevez, a Copa Libertadores champion and three-time reigning South American Footballer of the Year. ‘Carlitos’ had commanded a fee of around £9.5m when joining Corinthians from Boca Juniors in 2005. One season in Brazil proved enough as the Argentinean seemed destined to grace Europe with his talents, as Premier League champions Chelsea began to circle the forward. Valuations of anywhere from around £20m to £60m began to surface as Tevez became one of the hottest properties in world football.

Alongside him was midfield general Javier Mascherano. Also 22, the Argentina international had been courted by Arsenal and Manchester United after joining Corinthians one season prior. Barcelona and Real Madrid were also thought to be interested, but with the 2006 summer transfer window a matter of days from shutting, it looked likely that the pair could stay in South America.

That is, until West Ham stepped in. Managed by Pardew, the Hammers had been back in the Premier League just one year, but managed to pull off an incredible transfer coup in signing the pair from under the noses of Europe’s finest. Even more incredible was Hayden Mullins’ ability to keep Mascherano on the bench, while the murky involvements of investment group MSI, led by Kia Joorabchian, culminated in a £5.5m fine for West Ham. Mascherano lasted four months, while Tevez departed upon the end of the season.

2) Kevin Keegan (Southampton)
‘Southampton beat Liverpool, Barcelona and Juventus to two-time European Footballer of the Year’. Just imagine the field day today’s media outlets would have with Kevin Keegan’s shock move to Saints in 1980. It wouldn’t have been possible without Lawrie McMenemy’s interior renovation requests, of course.

The then-Southampton boss pulled off the most stunning of transfers in 1980, bringing in two-time reigning Ballon d’Or winner Kevin Keegan for £420,000. Saints boss McMenemy had handled the deal so impeccably that the media had no idea until the England captain was unveiled at a press conference to audible gasps.

“It all started with a lamp, believe it or not,” Keegan once explained of his move from European Cup finalists Hamburg to the south coast. “Lawrie McMenemy asked me to get him a wall lamp. He asked me to sort it out in Hamburg where he’d seen it in a brochure. Then we got talking and he said: ‘If you ever come back, we’d be interested.’ I think it was just his way of getting in.” McMenemy later revealed that the then 29-year-old forgot the light, but the boss would eventually get his man that summer.

“For a club like Southampton to sign the double European Footballer of the Year and England skipper was mind-boggling,” McMenemy told The Journal in 2002. After leading them to a 14th place finish in the First Division a season prior, it’s difficult to argue.

1) Allan Simonsen (Charlton)
It’s not too often that Diego Maradona and Charlton are spoken of in the same breath, but when recounting the story of Allan Simonsen’s brief but memorable spell with the Addicks, the two go hand in hand.

A Ballon d’Or winner in 1977, Danish striker Simonsen had enjoyed three fruitful seasons at Barcelona from 1979 after joining from Borussia Monchengladbach. The only footballer to have scored in the European Cup, UEFA Cup and Cup Winners’ Cup finals, Simonsen would be the victim of Maradona’s arrival at the Nou Camp in 1982.

Due to rules regarding the number of foreign players permitted in the squad, Spanish giants Barca were faced with a conundrum upon signing Maradona from Boca Juniors for a world record £5m. Of Maradona, Simonsen and star striker Bernd Schuster, one had to drop out of the starting line-up. Barca chose Maradona and Schuster, compelling Simonsen to demand that his contract be torn up.

While he didn’t get his wish, a move was on the cards. Real Madrid and Spurs were among the frontrunners for the forward, with clubs from Italy and Germany also interested.

None of them stood a chance when Second Division Charlton stepped in, however. Ambitious isn’t quite the word to describe the club’s £300,000 bid to bring in the then 30-year-old on a £82,000-a-year deal (1982, second-tier English club, remember). Barca snapped up the offer – more than twice what they had paid three years prior – and Simonsen was new Charlton chairman Mark Hulyer’s statement of intent.

It was a success story on the pitch. Simonsen, happy to take up the offer due to the lack of attention and lower stress levels, scored nine goals in his 16 appearances. All the while, Charlton were still scurrying around for the other half of their initial offer.

Finishing 13th in the second tier the season before, Hulyer had expected the record low gate receipts from a 6,000 strong capacity to multiply enough to help cover the expenditure. News of Simonsen’s arrival helped merely double the club’s attendance, with only a minority bearing witness to Simonsen’s impeccable finishing, fabulous touch and fearsome pace.

Three months after signing Simonsen, Charlton were desperate to offload him, his arrival crippling the club financially. Simonsen left for his hometown club, Charlton entered administration, and the club’s brief experiment with the most remarkable transfer coup in history had ended in disaster.