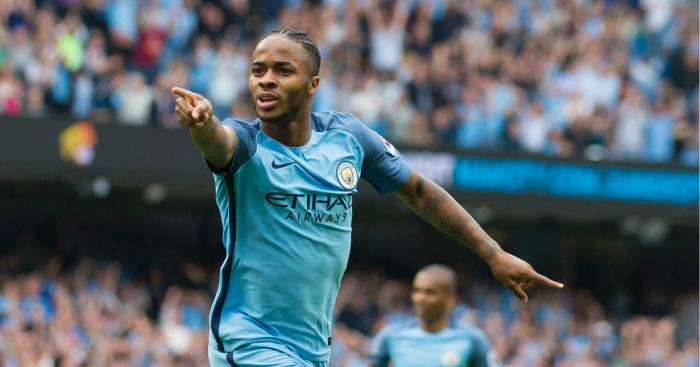 Premier League player – Raheem Sterling (Manchester City)
We get the feeling he might win this one a few times this season. We love him. If you don’t like it, find another website, Maybe The Sun; they think he is a ‘footie idiot’. Opta tell us that Sterling has had more touches in the opposition box (33) than any other PL player this season, but we don’t need statistics to tell us that he looks like a player reborn this season. He was phenomenal against West Ham on Sunday, his deft finish for his second and City’s third the sign of a confident, precociously gifted footballer. Welcome back.

Football League player – Jonathan Hogg (Huddersfield Town)
Listen, if Storey can pick a Nottingham Forest player, then I am having a Terrier while we’re still top of the league. Actually top of the sodding league. There’s no point including a link to the highlights of Town’s 1-0 win over Wolves because you won’t notice Hogg or any of his six interceptions as he thrives at the base of David Wagner’s midfield. Manchester City loanee Aaron Mooy looks a class act but Hogg’s tenacity allows Mooy the freedom to express himself.

European player – Medhi Benatia (Juventus)
When you are missing possibly the best centre-half in the world in Leonardo Bonucci, what you need is for his replacement to come in against a dangerous Lazio side and seamlessly link with Andrea Barzagli and Giorgio Chiellini. It’s fair to say that Benatia did alright…

Best goal – Mesut Ozil (Arsenal)
Eden Hazard’s strike was lovely and everything but we know he has that in his toolbox. Squint and this looks like Frank Lampard darting forward for a bullet header; Mesut Ozil simply does not do that kind of thing. It certainly took Garth Crooks by surprise…

Best pass – Danny Drinkwater (Leicester)
At first glance it looks like he’s just leathered it forward but then feel the weight of that pass – perfectly into the path of Jamie Vardy. If he wasn’t already going to be in Sam Allardyce’s squad then that pass sealed it. How to make long-ball football look beautiful.

That's as Vardy a goal you'll ever see. Absorb the attack, kill them with the quick counter. Fantastic pass from Drinkwater.

Best performance – Bayern Munich
The best odds you can get on Bayern Munich winning the Bundesliga are 1/6, and that looks pretty generous after Friday’s 6-0 dismantling of Werder Bremen that featured a hat-trick of goals from Robert Lewandowski and a hat-trick of assists from Thomas Muller. Not a bad old start to life under Carlo Ancelotti. Meet the new Bayern, just as devastating as the old Bayern.

Best tactical move – Jose Mourinho (Manchester United)
It’s not the introduction of Marcus Rashford that impressed us – after all, bringing on your second-choice striker at 0-0 with 20 minutes left on the clock is no tactical masterstroke. But keeping on Wayne Rooney – initially ‘greeted’ with moans – and moving him to the wing, eventually brought the goal. It’s just a shame that the opening 70 minutes were so frustrating largely because Rooney’s touch belies his status as Manchester United’s No. 10.

Worst player – Harry Kane (Tottenham)
Awful, awful, awful. For more on just how awful Kane played against Liverpool, read our 16 Conclusions from the game. For those who just need one statistic: Six passes completed from 19 attempts. His touch was rotten, his movement was rotten, his chances of scoring a goal were zilch.

10 – Harry Kane has not scored in any of his 10 Premier League appearances in the month of August. Incubation.

Worst tactical move – Alan Pardew (Crystal Palace)
So you have smashed your club’s transfer record to buy a striker (Christian Benteke) with a very impressive Premier League goals record, and he is a massive upgrade on your previous, goal-shy striker (Connor Wickham). So what do you do? If you’re Alan Pardew, you play them both. And then when it’s not working, move Wickham to the wing. Thankfully he changed things after 65 rotten minutes and the recovery brought a deserved equaliser. You got away with it, Chunky.

As bad as I have seen #cpfc in a while. 442 abandoned, Wickham out wide, Puncheon and Townsend in each others way. midfied non existent.

Worst punditry – Davie Provan
Seriously gave Adam Forshaw the Man of the Match award for West Brom v Middlesbrough because he played a phenomenal pass. The week before. Against Sunderland.

Dick move – Sergio Aguero
His excellence is not in doubt – and I am still seething at the Daily Telegraph ranking him as only the 35th best Premier League player of all time, below Gareth Bale – but Sergio Aguero, that was a dick move against West Ham. You looked, you lined up, you elbowed Winston Reid in the neck. A three-match ban is both inevitable and deserved.

Tactical insight of the weekend – Sean Dyche
“I think they’ve changed their gameplan, Chelsea. We saw the videos and did a bit of analysis on them. The full-backs tuck in more, the wide men are asked to do a bit more work. That’s a difference the manager’s made, with a back five and a front five – they separate and leave the one in the middle which is Kante, who covers every inch of the pitch. It’s handy to have that player in there I think.”

He’s right; it is ‘handy’ to have the best central midfielder in the Premier League.

Face of the week – Daniel Sturridge

Statistic we thought we would never see

Compiler of the week – Sarah Winterburn