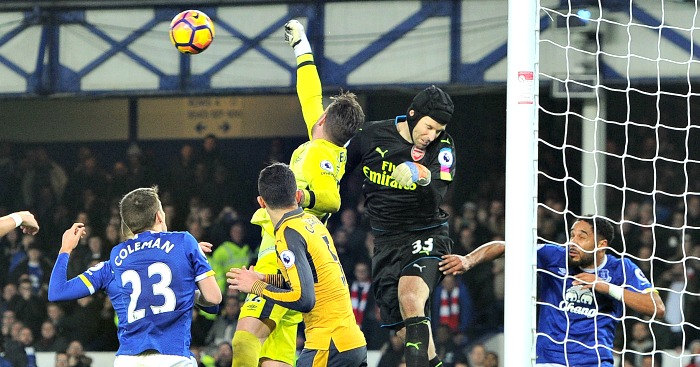 Premier League player – Jamie Vardy (Leicester)
Someone finally remembered to do a big shop. Jamie Vardy had his half-Lucozade bottle of port, three Red Bulls, double espresso and cheese-and-ham omelette for presumably the first time this season before taking to the field at the King Power Stadium on Saturday. The 29-year-old proceeded to score his first Leicester hat-trick against a Pep Guardiola-managed Manchester City, which is hilarious.

None of his three goals were particularly brilliant, but each required the hunger, the desire and the confidence which typified his performances last season, but which have been sorely lacking this. His first and third goals were delightful finishes, while his insistence on rounding Claudio Bravo must be applauded.

The Leicester forward, much like the rest of his side, reverted to the type of this season in a disappointing and drab 1-0 defeat to Bournemouth on Tuesday, with the hangover still lingering. But that should not take away from their showing from three days earlier.

Football League player – Mark Duffy (Sheffield United)
Having gone three consecutive games without a victory for the first time since August, Sheffield United needed someone to step up and take responsibility against League One strugglers Swindon. Mark Duffy was more than happy to oblige, scoring twice and dominating in a 4-0 victory which keeps the Blades in promotion contention.

European player – Stephane Ruffier (Saint-Etienne)
Guingamp had 18 shots, seven of which were on target, more than 60% of the possession, and general dominance throughout much of their meeting with Saint-Etienne. But a heroic performance from goalkeeper Stephane Ruffier secured a victory which lifts The Greens – Les Verts, for all you bloody purists – to within three points of European qualification in Ligue Un.

Guingamp manager Antoine Kombouaré noted after the 1-0 defeat that Ruffier’s showing had “discouraged our forwards”. The 30-year-old has already begun preparations for his man-of-the-match performance in thwarting old nemesis Zlatan Ibrahimovic and his Manchester United side at Old Trafford in the Europa League come February.

Who needs Pogba when you can have Jeff Hendrick pic.twitter.com/WkAyEdKymU

Best pass – Riyad Mahrez (Leicester)
The move started when Michael Oliver shrewdly intercepted Aleksandar Kolarov’s pass, and it ended with Riyad Mahrez’s deft, wonderful first-time touch into Jamie Vardy’s path for his second and Leicester’s third goal against Manchester City. Christian Fuchs’ 40-yard ball to the Algerian in between was quite something, too. Good work all round.

Best save – Darren Randolph (West Ham)
He might not be embroiled in a war of words/spat/battle with the Neville brothers, but Darren Randolph has been just as busy a boy as Loris Karius of late. And whatever the Liverpool keeper can do, West Ham’s (current) No 1 can do better, including being simultaneously responsible for the most and least impressive goalkeeping from the weekend.

Randolph ultimately cost the Hammers a one-goal lead over Liverpool by dropping both a figurative b*llock and a literal ball on to Divock Origi’s foot, allowing the Belgian to score a second-half equaliser at Anfield. But the Irishman made amends with a stunning save from Jordan Henderson’s effort later on, leaping to his left to claw away a shot destined for the top corner.

Best tactical move – Eddie Howe (Bournemouth)
Quite what persuaded Eddie Howe that moving Jack Wilshere into a more reserved role against Leicester would work so emphatically is unknown, but work it bloody well did. Each of the Arsenal loanee’s previous 11 Premier League appearances for Bournemouth came behind the striker. He had impressed, and was voted the Cherries’ Player of the Month for November, but had never been able to control a game like he did against the champions on Tuesday.

The 24-year-old continued his football rehabilitation away from the Emirates Stadium with a performance which included two shots, three tackles, one interception, two clearances, 81 touches, and more through balls than any of his teammates. He was also fouled four times, more than any player on the pitch. Was Ray Wilkins right all along?

Worst tactical move – Pep Guardiola (Manchester City)
When it was pointed out to Pep Guardiola that Manchester City did not win a single tackle in the opening 35 minutes of their demoralising loss to Leicester, the Spaniard’s response was rather unexpected.

“I am not a coach for the tackles. I don’t train the tackles. What I want is to try to play good and score goals, so what’s tackles?”

It was a brave stance, but the comments were made in the heat of the moment, directly following a defeat. After three days of intense reflection, the manager addressed the media once more on Tuesday.

“We are going to play the way we feel. I cannot do something I do not feel. We need to minimise the mistakes to win the games. But I believe in the way I like to play. The reason I am here is to help the players. I am thinking what I have to do to help them without changing. I believe in that way.

“Of course I have to adapt, but that doesn’t mean I change the way I believe in football. You have to play in this kind of way with these players, because it’s the best way.”

Premier League loan player – Andreas Christensen (Borussia Monchengladbach, on loan from Chelsea)
As we approach what are surely the death throes of John Terry’s Chelsea career, wouldn’t it be nice for Antonio Conte to have a talented replacement ready for next season? Someone like Andreas Christensen, perhaps, who continues to impress in his second season away from Stamford Bridge in the Bundesliga with Gladbach.

The Danish international scored the winning goal in a 1-0 victory over Mainz, while he also made six tackles, two interceptions and three clearances, as well as 71 passes at an accuracy of 90.1%. He is still only 20, yet now boasts extensive league and European experience from his time in Germany. Chelsea are alright at this loaning lark.

Minute of the week
92:50 – Phil Jagielka is sent off for a second bookable offence. Arsenal, 2-1 down to Everton, have a free-kick on the edge of the area.
93:26 – Maarten Stekelenburg punches the subsequent free-kick away. Petr Cech dives into the Everton goal, completely unaware of his surroundings.
93:32 – Alex Iwobi crosses the ball back into the Everton penalty area. Ramiro Funes Mori heads clear.
93:35 – Granit Xhaka regains possession after Dominic Calvert-Lewin’s poor clearance.
93:38 – Cech watches on in awe, still uncertain of the situation he has found himself in.
93:39 – The ball finds Alexis Sanchez, who delivers a cross which Stekelenburg clears again.
93:42 – Nacho Monreal latches on to the loose ball, but his effort is blocked on the line by Funes Mori.
93:43 – Iwobi then races on to finish from eight yards, but Leighton Baines is on hand to block on the line.
93:46 – The ball trickles away, with Everton having seemingly escaped the danger. But it falls to Sanchez, who bursts forward and is tripped by Ross Barkley. Referee Mark Clattenburg is unmoved. Barkley jogs away gingerly.
93:50 – Everton clear the ball and find themselves in a four-on-two situation and a chance to extend their lead and guarantee victory. They f**k it up. The game ends shortly thereafter.

Team of the week of the week
Ladies and men, Garth Crook’s 427-week reign of terror as holder of this award has come to an end. The year 2016 knows absolutely no boundaries. There are no rules, no restrictions, no ramifications. Nothing matters any more. It’s all meaningless. Because Aleksandar Kolarov was the best centre-half in the Premier League this past weekend. The same Aleksandar Kolarov who spent most of the defeat to Leicester running through quicksand as he attempted to keep up with Jamie Vardy. He had only just removed the treacle his boots had gathered after spending the previous week chasing Eden Hazard’s shadow.

Role reversal of the week

Congratulations to all involved.

Stat of the week
Chelsea finished a combined 53 points behind Manchester City, Arsenal and Manchester United last season. They now have a cumulative lead of 23 over those three clubs. That is a 76-point swing. Cumulatively.

Dembele of the week – Mahamadou Dembele (Paris St Germain U19)
For the third consecutive week, Bira can count himself unlucky, the League Two Paulo Maldini having inspired Barnet to a third consecutive victory. But he can have no real complaints over the identity of this week’s winner, with 17-year-old PSG youth Mahamadou playing the full 90 minutes in a UEFA Youth League victory over Ludogorets.