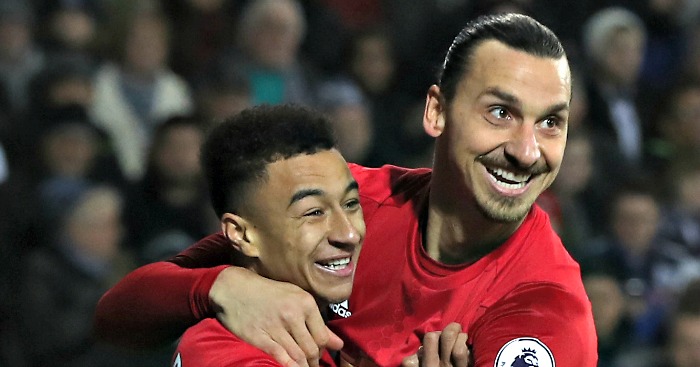 Premier League player – Alvaro Negredo (Middlesbrough)
I was in the Alvaro Negredo camp of those who thought he was an expensive gamble, a player looking for a comfortable place to make home rather than likely scorer of ten or more Premier League goals and inspiring relegation survival. Sarah Winterburn was in the opposite camp, and she will smile at the pain I was in writing these four words: She was probably right. Negredo may only have five league goals (equalling his total from each of the last two seasons), but on Saturday he scored one belting opening goal and a penalty to give Middlesbrough precious victory. Those £100,000-a-week wages pay for themselves on days like those.

Football League player – Matty Lund (Rochdale)
At some point the correlation between our Football League Player of the Week and the EFL’s team of the week will be noticed, but there’s no doubting that Rochdale midfielder Lund deserves his place here. Having scored 19 league goals in his entire career, the former Stoke youngster scored three times in under an hour to give Rochdale their second consecutive 3-2 win. Surely not a push for the Championship?

European player – Dries Mertens (Napoli)
Not content with scoring a hat-trick last week, Mertens went one better against Torino by scoring four goals that included three in nine minutes. The last goal made Joe Hart look like the loneliest man in Italy.

Dries Mertens gives Joe Hart no chance, as he leaves the stopper stranded with a sublime chip. https://t.co/OumjPhXJwy

Best goal – Jay Rodriguez (Southampton)
You have to tread carefully when suggesting a player is prone to injury – we all remember Darren Anderton calling Conor McNamara a “piece of shit”. Yet Rodriguez’s recent career has been a tale of woe. A tale of woe that ended with a dipping volley and two goals against Bournemouth on Sunday. It’s a ballsy ending for a Hollywood film, granted.

Best pass – Jesse Lingard (Manchester United)
We will remain staunchly unconvinced about Lingard’s ability to start for an elite club, but crosses like the one to assist Zlatan Ibrahimovic’s first goal on Saturday is just one way of making us look stupid. Sprinting beyond the full-back, a quick look up, arriving at the ball and crossing it in one motion, leaning back, applying curl to the ball and placing it so perfectly that Ibrahimovic hardly had to break stride. Consider all those boxes ticked.

Emre Can not pass pic.twitter.com/VjfbDWTRAh

Footballers doing football things as badly as you or I would should be everyone’s favourite jam.

Best save – Ben Foster (West Brom)
The year is 2019, and a bearded, hefty Wayne Rooney is still finding elaborate ways of not equalling Bobby Charlton’s goal record for Manchester United, a hundred columns pouring praise on him left unpublished. This week it was Ben Foster’s turn to make Rooney say “f**king c***” under his breath by tipping his snapshot onto the crossbar and out. I’ve so much more time for a reaction diving save than one from a curling shot, and there’s nothing you can say to change my mind.

Best tactical move – Pep Guardiola (Manchester City)
To err is human, but to accept your mistake and shift round the front three at half-time is divine. Guardiola was forced into removing the injured Pablo Zabaleta, but by moving Raheem Sterling from centre to right, Leroy Sane from right to left and Kevin de Bruyne from left to the centre the Manchester City manager achieved the most successful rearrangement since Atomic Kitten got Jenny Frost to replace Kerry Katona.

Worst tactical move – Arsene Wenger (Arsenal)
Having done his trademark winger-for-winger substitution bang on the typical 65th minute mark, Arsene Wenger then went for the equally predictable Olivier Giroud Plan B in place of Francis Coquelin, three minutes after conceding. That left Wenger with one substitution, one chance to change the game in Arsenal’s favour.

Would it be Lucas Perez, the striker who scored a hat-trick in his last start? That certainly seemed most likely when Alex Oxlade-Chamberlain signalled to the bench that he was injured. Attacker for attacker. He who dares wins. This time next year we’ll be millionaires.

Up stepped Mohamed Elneny. Defensive midfielder for winger, at 2-1 down. Lovely stuff.

Premier League loan player – Steven Berghuis (Feyenoord)
You might remember Berghuis from starting games like Watford vs Newcastle in the FA Cup third round and… oh, that’s it, actually. The winger was signed for £4.6m at the age of 24 with a decent reputation, and then never even afforded a league start. Loaned out to Feyenoord for the entirety of this season, Berghuis is happily sitting on top of the Eredivisie table and scored twice against Vitesse on Saturday. Meanwhile, Watford lost 1-0 at Sunderland with Nordin Amrabat and Juan Zuniga as their wide players.

Kick a club while they’re down of the week
Do you remember Ricky Alvarez? He joined Sunderland on loan in 2014, was largely dreadful and eventually joined Sampdoria, where he is still playing. It now turns out that the reason David Moyes has no money to spend is because Sunderland are fighting a ruling which may mean they have to pay £10.5m to ‘sign’ Alvarez, thanks to meeting a clause which gave them an obligation to sign him on a permanent deal. It never rains…

Snark of the week – Real Madrid
Having had their transfer ban reduced to just one window, did Real Madrid:

a) Keep their heads down and privately celebrate the ruling?
b) Issue a wonderfully catty statement?

‘The Court of Arbitration for Sport (CAS) has today informed Real Madrid C. F. of their decision by which they have partially upheld the appeal lodged by the club against the FIFA resolution which imposed a sanction forbidding the signing of players for two transfer windows, reducing said sanction to just one period, corresponding to the January 2017 transfer window.

‘The decision highlights the injustice of the original ban imposed by FIFA, although the club regrets that the CAS lacked the courage to revoke the ruling entirely.’

Analogy of the week
“It is well known, the referees are protected very well like the lions in the zoo, so we have to live with those decisions. I want them to be very well protected, I want them to be safe, but if they could make the right decisions it would be even better” – Arsene Wenger.

Being caged up with Mike Dean for a week would be enough to make you send anyone off. Which takes us to…

Mike Dean moment of the week
I can’t imagine how annoying it must be to play in a game where the referee wants to be the centre of attention. Incredible work, again.

Lucky b*stard of the week

Not a bad way to start #ChristmasWeek! ? pic.twitter.com/m4GgWPxDwr

“Tell you what, make it two turkeys.”

Dembele of the week – Becka-Kah Dembele
Now you may think playing the last 17 minutes in a 5-0 defeat for Dartford in the National League North is no cause for celebration. But, having played 768 league minutes last season, the midfielder had managed just two all season before Saturday. Increasing your season minutes by more than 800% in one game. Come on down…

Last minute Christmas present idea because this column needs some festive spirit
Go to the Copa Football website (this isn’t an #ad, they’re just great), buy the shirt below for everyone special in your life and if they don’t rank it as their best present they weren’t worth knowing anyway.

Also, just bought what I think might be the coolest ever football shirt. Montreal Manic's 1981 effort. pic.twitter.com/vkj8X4cJ7B