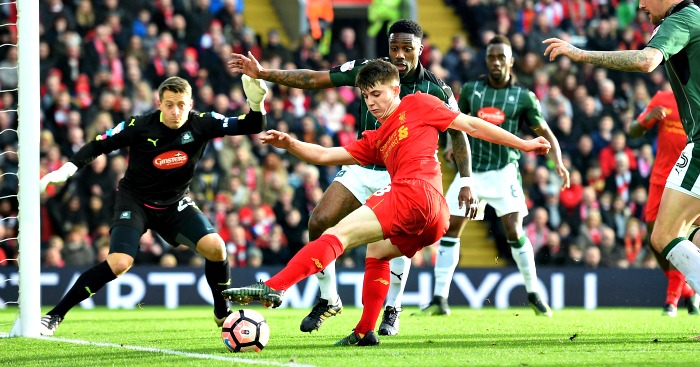 FA Cup player – Craig Eastmond (Sutton United)
On a weekend of FA Cup football more notable for defensive masterclasses than attacking flair – no player scored more than two goals in any third-round tie – it is Sutton United midfielder Craig Eastmond who receives this coveted award. His display helped the non-league side to a 0-0 draw against AFC Wimbledon.

It has been a long journey back to the limelight for the 26-year-old, who once featured in the Champions League for Arsenal. That 59-minute cameo in a 2-1 defeat to Shakhtar Donetsk in 2011 – in which he scored an own goal – prepared him for Saturday’s clash, with Matt Tubbs fulfilling the role of Nicklas Bendtner, and Dean Beckwith doing his best Sebastien Squillaci impression. In a match where quality was at a premium, Eastmond still managed to look a class above in front of the cameras.

What do you mean neither BBC nor BT Sport televised the game? What is this madness? With whom do I register my outrage?

Football League player – Ellis Harrison (Bristol Rovers)
He scored four goals in a 5-0 win over Northampton, with Ntown boss Rob Page losing his job in the aftermath of the humiliation. His hat-trick goal was a backheel flick to conclude a sweeping team move. What exactly did you do with your Saturday?

European player – Wissam Ben Yedder (Sevilla)
In their never-ending search for a striker in the summer, West Ham were offered the chance to sign Wissam Ben Yedder. They rejected the opportunity, with reports claiming that Slaven Bilic and the club’s board considered the striker ‘too small’ and ‘too weak’. Ben Yedder looked neither while scoring a hat-trick and assisting Sevilla’s other goal against Real Sociedad on Saturday, lifting Jorge Sampaoli’s side into second in La Liga. It was the 26-year-old’s eighth goal and second assist in nine league games. West Ham are bloody hilarious.

Fancy bringing the cinema into your home this month? Add Sky Cinema for just £8.50 extra a month, if you have Sky Sports.

Manager John Coleman broached the problem on the opening day of the season. “My man of the match against Wycombe was Sean McConville but what do I know?” he said. “Our fans probably thought he was hopeless. There is a big section of our fans who seem to dislike him just because he’s Sean McConville.”

If McConville is intent on winning over said sections of the support, then scoring wonderful goals to help them reach the fourth round of the FA Cup will certainly help.

Best pass – Chris Forrester (Peterborough)
A pass so good that John Terry felt it necessary to bring down Lee Angol to ensure he was sent off, just so he could watch a replay as soon as possible.

ICYMI: It was an unhappy return to the @ChelseaFC first team for John Terry. #EmiratesFACup https://t.co/BXhxQcrJs7

Best save – Wojciech Szczesny (Roma)
Bring him back, Arsene.

Szczesny's last minute save vs Genoa, pretty good that. pic.twitter.com/jGB2ymhhik

Best tactical move – Derek Adams (Plymouth)
It might have seemed a little arrogant, perhaps even boastful, but Derek Adams could hardly have been blamed. “That was one of the best defensive displays you will see at Anfield,” was his summation after watching Plymouth hold Liverpool to a 0-0 draw on Sunday, the biggest result of his managerial career. Their reward and his is a replay at Home Park, as well as some lovely funds in the bank.

The curmudgeonly among you will point out that Liverpool fielded their youngest-ever starting XI, but these were not players who had only just been introduced to the sport. Lucas Leiva, Alberto Moreno, Emre Can and Divock Origi have played in European tournaments and World Cups, and that is without mentioning the substitute trio of Adam Lallana, Roberto Firmino and Daniel Sturridge. Try as they might, Liverpool could not breach the defensive wall formed by the League Two side.

It was hardly goalkeeper Luke McCormick’s busiest afternoon, either. Liverpool had 28 shots, 17 of which were from outside the area, 12 of which were blocked, and just four of which were on target. Each member of the defence earned free drinks on the south coast for the foreseeable future, with centre-half Sonny Bradley leading the way in clearances (14) and blocked shots (4), and left-back Ben Purrington completing four tackles. Central midfielder Oscar Threlkeld made three interceptions.

So seven of their players registered a pass completion rate below 60 per cent, and Liverpool had almost four-fifths possession. So what? Plymouth came with a game plan and executed it to perfection. David did not quite topple Goliath, but they landed a few bruising hits of their own while avoiding a knockout blow.

Premier League loan player – Federico Fazio (Roma)
The man with the turning circle of a tanker and the pace and agility of a wardrobe, Federico Fazio has finally found a home after a tumultuous time at Tottenham. The Argentinean can now be found in the centre of Roma’s three-man defence, ensuring that he has to move as little as possible.

The 29-year-old struggled to ever assert himself at Tottenham, while a loan spell with Sevilla earlier this year was unable to inspire any positive form. But he has been a revelation for Roma, and was bloody good in the 1-0 victory over Genoa. He completed four interceptions, won five aerial duels and made 22 clearances – at least 16 more than any of his teammates. Are you watching, Mauricio Pochettino? Probably not.

Watch the NFL Play-offs and Premier League this month. Only £18 a month extra if you have Sky Cinema

Presumed transaction of the week
‘He was chatting to the waitress, who clutched some money in her hand – presumably the French international or his pal paying her.’

Lovely work from The Sun, there.

Reunion of the week

#CPFC are pleased to announce that Sammy Lee has joined the club as Assistant Manager – https://t.co/2I5l2oCosQ pic.twitter.com/dhyOLePvG8

Stat of the week

Skill of the week

Pretty sure I pulled something just watching that. So to speak.

Dembele of the week – Mana Dembele
Hopefully Oswald Tanchot has learned his lesson. The Le Havre manager watched his side struggle and toil against Guingamp in Ligue Un on Saturday, with Moustapha Diallo and perennial Premier League target Jimmy Briand handing the hosts a 2-0 lead. He introduced substitute Mana Dembele in the 78th minute. The rescue mission was beyond even the 28-year-old – although he did manage to score a 90th-minute consolation.