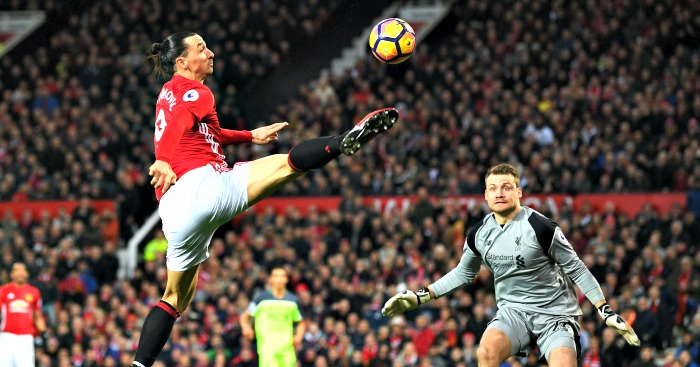 Each heroes to a man; each outdone by one individual. The above is just an eclectic selection of the players to have assisted one or two Premier League goals this season. It took just 18 whirlwind minutes for Antonio to surpass them all at the London Stadium. He provided the centre for Sofiane Feghouli’s tap-in, the cross for Andy Carroll’s spectacular strike, and the incisive pass for Manuel Lanzini’s delightful finish against Crystal Palace – a hat-trick of assists for a player whose value to his struggling club continues to skyrocket.

Antonio spent Friday recovering from a bout of flu, before aiding the Hammers in their own post-Payet funk on Saturday. There are worse ways to further endear yourself to a fanbase looking for a new cult hero.

Football League player – James Vaughan (Bury)
A day prior to Tom Davies and Ademola Lookman becoming two of the youngest goalscorers in Everton history, the outright holder of that particular record was living up to his one-time immense potential by helping Bury to a 5-1 thrashing of Peterborough in League One. Vaughan, still the Premier League’s youngest ever goalscorer, hit his first goal of the afternoon on seven minutes, and had added three more before the half-hour mark. Peterborough had lost just one game in nine before Saturday; Bury were winless in 21. Football is fun.

James Vaughan with four goals in under half an hour for Bury. Just think, it was a mere 45 years ago that he broke through at Everton.

Fancy bringing the cinema into your home this month? Add Sky Cinema for just £8.50 extra a month, if you have Sky Sports.

European player – Stevan Jovetic (Sevilla)
Tuesday: Joined Sevilla on loan until the summer, having failed to start a single game for Inter Milan all season.

Thursday: Scored on his debut against Real Madrid in a pulsating 3-3 draw in the Copa del Rey.

Saturday: Struck a stoppage-time winner for Sevilla against Real Madrid, ending the latter’s 40-game unbeaten run, and moving his new side to within a point of the La Liga leaders.

As an aside, watch this goal, and then consider that The Sun described it as follows:

Best goal – Andy Carroll (West Ham)
Like a gorilla performing in the circus, a giraffe walking on ice or Daniel Storey talking to a woman, Andy Carroll’s bicycle kick against Crystal Palace was quite wonderful to witness: a moment of captivating beauty accomplished by one so inherently awkward and inelegant. For a West Ham crowd still in disbelief after their latest season setback, the striker’s second-half acrobatics proved that there can indeed be life after Simone Zaza. Messrs Mkhitaryan and Giroud dazzled with their respective scorpion kicks, but this strike involved no hint of offside or luck, just pure mastery of timing and technique.

Best pass – Pedro (Chelsea)
John Obi Mikel may have departed these shores to join an unnamed Chinese Super League club, but his spirit lives on at Stamford Bridge through such sublime touches.

Best save – Simon Mignolet (Liverpool)
Simon Mignolet did promise he would put up a fight, and he currently has Loris Karius on the canvas after yet another impressive performance. The Belgian’s goal was eventually breached six minutes from time by Zlatan Ibrahimovic, but Liverpool would have had no lead to defend were it not for their current first-choice goalkeeper.

The best of Mignolet’s saves at Old Trafford was one which, in normal time, could look fairly routine. Manchester United had won a free-kick on the edge of Liverpool’s penalty area in a central position. The wall was positioned to guard the left-hand side of the goal, with the commentators wasting no time in questioning whether the taker had enough space to ‘get the ball up and over with enough dip’.

Ibrahimovic spotted a path. The 35-year-old blasted the ball low and hard towards the bottom right-hand corner, forcing Mignolet to palm it away. It was only on second viewing that you realised the keeper’s view was obstructed into the final moments, and that he had to react within an instant not only to save the shot, but to parry it away from danger.

Jurgen Klopp’s inability to buy a keeper better than Mignolet in the summer is one of the biggest mistakes of the season, yet it cannot be denied that the 28-year-old has responded emphatically to being dropped at the start of the campaign.

A shout-out to Burkina Faso's Herve Kouakou Koffi. This is the type of maniacal goalkeeping you won't see in Europe. https://t.co/uMQdv2J4Td

Best tactical move – Marco Silva
When Marco Silva described loan signing Oumar Niasse as “more or less like a Diomande” earlier in the week, the original Adama must have feared the very worst. This was a player who had missed just three games all season for struggling Hull, yet his new manager was comparing him rather unfavourably to a man who could not even lay claim to his own locker at Everton. Niasse, with just 142 Premier League minutes to his name, might already have jumped ahead in the queue.

Whatever persuaded Silva that Diomande, whose previous appearances this season had come as a striker or a left-winger, could become a competent right wing-back is unknown. But the 26-year-old fulfilled the role admirably in the 3-1 win over Bournemouth, making more tackles (5) than any other player, creating two goalscoring chances, and restricting Bournemouth’s left-hand pairing of Ryan Fraser and Charlie Daniels to zero shots and one key pass between them.

Worst tactical move – Pep Guardiola
As ever, the perceptive weekend analysis came from Graeme Souness. “Zabaleta, 31, Yaya Toure, close to 34 years old… that’s your engine room,” was the Scot’s simple assessment of Manchester City’s problems in the 4-0 loss to Everton. It was not necessarily what the Sky Sports pundit said, more how he said it: the cutting delivery mixed confusion with consternation. Not for the first time this season, Pep Guardiola’s tactics had left the general onlooker baffled.

That Zabaleta, a right-back, and Toure, an ageing force who was not even part of the first team at the beginning of the season, started such a difficult fixture in central midfield remains a mystery. Their opponents took full advantage, Tom Davies and Ross Barkley the energetic children making a mockery of their babysitters. The Toffees pair were particularly eye-catching as Everton and Ronald Koeman inflicted upon Guardiola his heaviest ever league defeat as a manager.

Please start learning from your mistakes, Pep. Those fools can’t be right…can they?

Premier League loan player – Marco van Ginkel (PSV)
One of Chelsea’s 40-strong loan army, Marco van Ginkel has returned to a familiar scene after struggling with injuries and form during spells with AC Milan and Stoke. The 24-year-old spent the latter half of last season on loan at PSV, scoring eight goals in 13 games. After recovering from yet another knee injury and signing a new Chelsea contract, the midfielder has returned to continue his Eredivisie fling, picking up where he left off with the opening goal in a 2-0 win over Excelsior. He had seven shots, 79 passes and 94 touches – more than any other player.

Marco van Ginkel has scored 9 goals in his last 13 Eredivisie matches as centre-midfielder. Too good for this league.

‘When Harry Kane scored a hat-trick on Saturday, a few days after becoming a father, it reminded me of when my first wife Sarah was pregnant with our first child and Millwall had a game. She told me to go and play. Before the match, I was in the car park signing autographs at the old Den. I played and found out after the match that my son Michael had been born. I rushed to the hospital but stopped on the way to buy a congratulations card. I gave it to her and she threw it back at me from her hospital bed. I’d written, ‘Best wishes, Tony Cascarino’. I was on auto-pilot from signing autographs and for some reason I did the same for Sarah.’

Week of the week
On that note, congratulations to Harry Kane, who celebrated becoming a father two weeks ago by scoring a lovely hat-trick against West Brom. As Karren Brady so eloquently, beautifully and touchingly put it: ‘Congratulations to Harry Kane for his ‘assist’ in the birth of daughter Ivy Jane…but that’s all it was. All the heavy work was done by your girlfriend.’

Wonder if they do those cards at Clintons.

Watch the NFL Play-offs and Premier League this month. Only £18 a month extra if you have Sky Cinema

Superimposition of the week

No. 66 Alexander-Arnold isn't on Sky Sports line up so they photoshop his head onto Joe Gomez's body (No.12) #alexanderarnold pic.twitter.com/IQmnjwu8O2

When did Andre Marriner get a job in the graphics department at Sky Sports?

Marco Simone is not content with watching the world burn. He must light the match himself and alert the fire brigade to another emergency elsewhere before starting the blaze. It is the only possible explanation for the fact that he and he alone was responsible for preventing one of football’s rarest ever sights last Friday. The ‘Dembele derby’ is a phenomenon oft spoke of, but never seen. Yet when Aliou Dembele started for FC Chamois Niort in Ligue 2, he would rightfully have expected to have faced one of his band of brothers. Modibo Dembele had, after all, missed just eight games all season for Stade Laval. But the midfielder was not even named on the bench by Les Tangos for the 2-2 draw, with manager Marco Simone starving the football world of a significant piece of history.