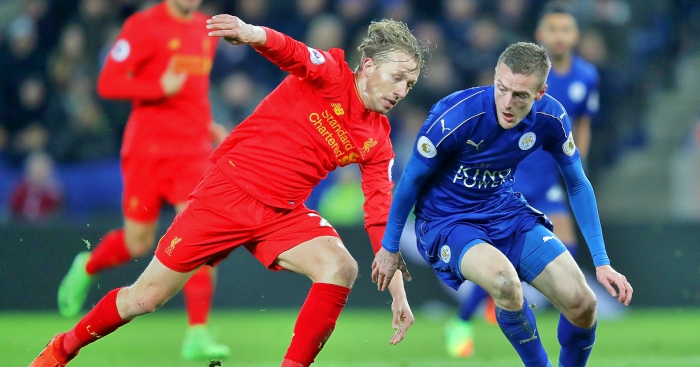 Premier League player – Harry Kane (Tottenham)
The Stoke defence might not have provided the most convincing resistance, while the last instalment – as is often the case for the third in a trilogy – felt somewhat anti-climactic, with Peter Crouch getting a decisive touch on his driven free-kick. But finding faults in Harry Kane’s third hat-trick of the season is like criticising Da Vinci because his painting of St John the Baptist is not quite as aesthetically pleasing as the Mona Lisa. It was not his most memorable creation, nor his finest on a technical level, but it was yet another piece to add to his growing body of work. And Kane is establishing himself as one of the finest artists around.

His first goal was finished sublimely after an assist from Ryan Shawcross, while his third was as fortunate as they come. But his second was taken straight from the official striker textbook, a wonderful example of keeping your eyes on the ball and ensuring your head and knee are over it to keep the half-volley down. The poster boy for practice makes perfect had football coaches up and down the country rejoicing in union. He even helped Dele Alli exorcise his demons, providing the pass for his goal.

Not quite content with his efforts, the 24-year-old repeated the feat four minutes later. Michael Ngoo was penalised for handball, and Millwall striker Lee Gregory stepped up again. He chose right this time, having been thwarted moments earlier when going for his left. Ripley kept it out again, ensuring a 0-0 draw.

Yet the 24-year-old, on loan from Middlesbrough, was not quite done. He made six saves against Northampton on Tuesday, playing a key role in a 2-1 victory. Oldham, who have conceded fewer goals in League One (34) than all but three clubs, are now three points clear of the relegation zone.

European player – Mattia Caldara (Atalanta)
Three tackles. Five interceptions. Ten clearances. One blocked shot. A Napoli side who had scored ten goals in their last two Serie A away games, and who boast the talents of Lorenzo Insigne, Dries Mertens, Marek Hamsik and Vlad Chiriches, kept out by a team now only three points behind them in the table. Oh, and Mattia Caldara managed to combine the above statistics with both the goals in a 2-0 victory for Atalanta at the weekend. Interested in signing him? Juventus announced in January that he would join them in summer 2018. Of course.

Best goal – Youri Tielemans (Anderlecht)
The first two goals in the below compilation were scored by Youri Tielemans in one game last week. The third was his effort for Anderlecht in the 2-0 win over Genk on Sunday. He’s 19, for goodness’ sake.

Best pass – Tom Davies (Everton)
There is a reason rumours are abound that Steven Gerrard has posters of Tom Davies on his bedroom wall. The 18-year-old really is quite something, and was once again impressive against Sunderland on Saturday.

Davies hit the post with a lovely strike at Goodison Park, but it was his pass to Seamus Coleman in the build-up to Idrissa Gueye’s opener which was the talking point. Was it intentional? Probably not. But it still looks rather bloody nice.

Is this pass from Tom Davies intentional or not? This is important. https://t.co/w5jOih4VHR

Best intended pass – Ben Davies (Tottenham)
The first surprise for Tottenham fans was that Ben Davies had not only completed a pass, but that the recipient was one of his teammates. Striding forward in the first half, the Welshman managed to finally replicate the attacking output of Danny Rose, playing a delightful ball in between two Stoke defenders and into the feet of Alli. What followed was a poor touch and a weird attempt at a Paolo Di Canio-esque volley from Kyle Walker, but still.

Best save – Jeroen Zoet (PSV)
If you thought the debate over goal-line technology had become a little overbearing in the aftermath of Southampton’s EFL Cup final defeat to Manchester United on Sunday, just remember that it could always be worse. Much, much worse.

On Sunday, PSV entered the final ten minutes of their clash against Feyenoord with the two sides level. A draw would have kept PSV within touching distance of their hosts, who led the Eredivisie table by eight points. It would be a difficult title race to win, granted, but it would still be possible.

Then Jeroen Zoet happened. The PSV keeper barely managed to keep out Jan-Arie van der Heijden’s 82nd-minute header. What he did not account for was goal-line technology noticing that, under absolutely no pressure, he went on to inexplicably carry the ball over the line as he attempted to get up. Silly boy.

The own goal that knocked PSV out of the Eredivisie title race. As soon as Zoet pulls the ball back, the goal-line system rules it as a goal pic.twitter.com/WS2GJnopmC

Best tackle – Dele Alli (Tottenham)
What do you mean, it was a tackle which nearly broke Gent midfielder Brecht Dejaegere’s leg? Don’t you mean that this was just proof Dele Alli has “a bit of devil in him, an edge”? That the ball simply “got away from him and he thought: ‘Have some of that because the game’s not going my way.'” If you want to tell Graeme Souness that that is a bloody mental line of thinking, go ahead. I shan’t be doing so.

Best tactical move – Craig Shakespeare (Leicester)
“How much did you say to them, ‘look, just go back to what made you champions, the way that you played?'” asked the Sky Sports interviewer of Leicester caretaker Craig Shakespeare following the 3-1 win over Liverpool. The response was simple:

“We stressed that before the game. We wanted the energy levels, and we kept reminding them about that.”

It was hardly a groundbreaking tactic, to revert to the style which had delivered the most remarkable of Premier League titles, but it was certainly effective. Many will bemoan the increased “energy levels” in the aftermath of Claudio Ranieri’s sacking, but it was only natural; the players wanted to prove a point to their critics.

For it was Ranieri who strayed ever so slightly from the Foxes’ tactics this season, not the players. The Italian changed the system to rely more on short passes instead of counter-attacking bursts, while the majority of the defensive work was done in their own half, instead of Jamie Vardy pressing from the front and chasing down lost causes.

Not on Monday at the King Power Stadium. “Before the game we spoke with Shakes and he asked us what we thought were the best actions to take,” said Vardy after scoring twice. “We thought it was to press higher and win the ball higher up.” And so they did.

Liverpool assisted the Foxes with their own brand of ineptitude, but Leicester still deserve credit for their performance, as does Shakespeare for going back to basics. It was a script that even the greatest, most renowned writer in history could not have produced. Unfortunately, I can’t remember the bloke’s name.

Worst tactical move – Aitor Karanka (Middlesbrough)
Winners and losers placed Aitor Karanka firmly in the latter category, and with good reason. After 26 Premier League games they are the lowest scorers (19 goals), and no club in the top five division of English football have won fewer games.

The 1-0 defeat to Crystal Palace might be the lowest point yet. Boro could have pushed clear of the relegation zone, while pushing a rival closer to the Championship trap door. But they surrendered in typical fashion: a meek defeat in which the scoreline suggests they were close but unlucky. The reality is that Boro’s tactics once again were the root cause.

Karanka explained after the game that he was forced to change Boro’s approach when, a day before the game, George Friend was ruled out through injury. The manager could have called upon James Husband, a natural left-back. But the Spaniard instead chose to change to a 3-5-2 formation that was unfamiliar to the players, and which forced the travelling Boro faithful to watch Stewart Downing as a left wing-back for 90 minutes.

The change to a three-man defence also exposed the weaknesses of Daniel Ayala, while it played into the hands of Crystal Palace. It is no secret that Sam Allardyce’s side rely on dominating the wings, but Boro surrendered that particular fight before it had even begun.

Karanka’s response to a one-goal deficit at half-time was to replace Alvaro Negredo, a tall striker struggling due to a lack of supply, with Rudy Gestede, a tall striker who would struggle due to a lack of supply. The substitute would work harder and win more headers than his counterpart, but the approach would not change. Of the ten players who completed the most passes in the attacking third, Crystal Palace accounted for eight, including each of the top five. Boro’s highest was Ben Gibson.

Combine the problems with a familiar issue – exciting, pacy, skilful and attacking winger Adama Traore was introduced with only 11 minutes left – and a feeling of dissension is growing on Teesside. That’s what ‘Stewart Downing: Left wing-back’ will do to a fanbase.

Premier League loan player – Eliaquim Mangala (Manchester City, on loan at Valencia)
Eliaquim Mangala started and starred against Real Madrid in Valencia’s 2-1 La Liga win last Wednesday. He was then an unnamed substitute as Los Che suffered a shock defeat to Alaves the following Saturday. He marked his return to the starting line-up on Tuesday with his first goal in 90 appearances in a 1-0 win over Leganes. Have that, Pep.

Training ground routine of the week

Scarf of the week

Fate-tempting moment of the week

“We have improved markedly since that game. I would be very surprised if the result was the same.”

How surprised will Mark Hughes be next season when Stoke lose a fourth consecutive game 4-0 to Tottenham?

Dembele of the week – Mahamadou Dembele
Stade Laval manager Marco Simone continues to be punished for his refusal to play two Dembeles at the same time, with Mana scoring in Modibo’s absence in a 4-2 defeat to Bourg-Péronnas. Elsewhere in the land of Dembele, Moussa scored twice for Celtic in a 2-0 win over Motherwell.

But this week’s award has to go to Paris Saint-Germain U19 star Mahamadou Dembele. He played 90 minutes as the young French side faced Red Bull Salzburg U19 in the UEFA Youth League last 16. PSG were beaten 5-0, Mahamadou somehow managing to restrict a side containing a Haidara and a Mensah – two other proud footballing families – to single figures.