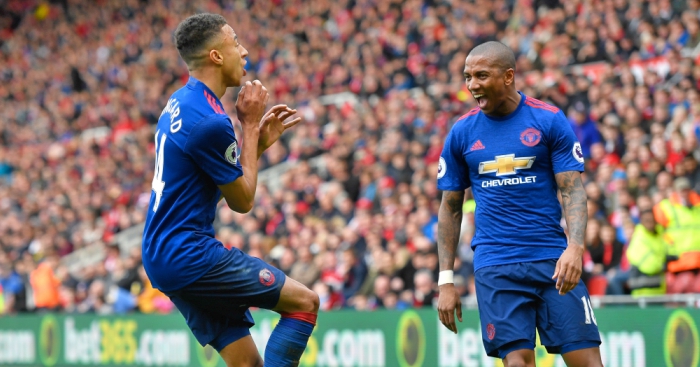 Premier League player – Benik Afobe (Bournemouth)
Bournemouth’s former club-record signing played a part in the opening goal against Swansea, his first-half effort deflecting in off Alfie Mawson, before he struck again in the second half. He has now matched his best goalscoring return in a Premier League season, and has started three consecutive games for the first time since last March. Stick that on your curriculum vitae, big man.

“It has been tough for me,” said Afobe, who has been in and out of the side. “I started well and then got a hamstring injury when I went away in March last season. I didn’t come back the same player. I lost my head a bit. I had a heart-to-heart meeting with the manager. My chat with the manager was important because it showed he cared. He could have just left me to one side and said he didn’t want me in and around the changing room.”

Andy Townsend has so, so much to answer for.

Football League player – Lasse Vibe (Brentford)
When Sergi Canos fired mid-table Brentford into an early lead against relegation-embattled Burton on Saturday, one might have expected a rather quiet afternoon. A further goal here or there for either side perhaps, but nothing drastic.

Marvin Sordell had not read the script. Fresh from his questionable England snub, the Burton striker scored twice in two minutes, and F. Scott Fitzgerald character Cauley Woodrow added a third. Somehow, the hosts had recovered to take a 3-1 lead by the 41st minute.

One particular Brentford striker was not feeling that. Vibe scored two goals and assisted a further two in the second half as the Bees inflicted upon the Brewers their first defeat in seven games with a remarkable 5-3 comeback win. As the oft-butchered rhetorical question goes: Scott Hogan who?

Scott Hogan was involved in a goal (scored or assisted) every 150 minutes this season. Lasse Vibe has been involved in one every 109 minutes

European player – Anthony Modeste (Cologne)
The scorer of a hat-trick for Cologne in their 4-2 win over Hertha Berlin is now behind only Lionel Messi (25) and Pierre-Emerick Aubameyang (23) in the goalscoring stakes across Europe’s top five leagues. He now has 22 in 25 games after failing to score once in nine Premier League games during his ill-fated loan spell at Blackburn in 2012. That is a Modeste achievement, people.

Anthony Modeste on. Remember him having arguably the worst evening I've ever witnessed a striker have, one cold, windy night in Blackburn.

Best goal – Jesse Lingard (Manchester United)
Some people might be willing to admit that they might have been wrong on Jesse Lingard, but not me. He’s still rubbish, and I’m still never wrong. Get over it.

One thing I will accept is that he scores some bloody nice goals. That is a finish as satisfying as the defending is standoffish.

Best pass – Samuel Umtiti (Barcelona)
It is a fact worth repeating: Barcelona’s win percentage in all competitions when Samuel Umtiti starts is 83.8%; without him, it is 33.3%. They have won each of the 16 La Liga games he has started. He’s pretty good, and quite handy in possession, too.

Here is the unbelievable pass from Umtiti, followed by a great skill from Suarez inside the box..pic.twitter.com/ORVTF14w9T

Not a goal but had to post this:
Stevenage's Chris Day must've known what @ConorChaplin19 had planned for this penalty. ???? Embarrassing! pic.twitter.com/vbeUu2vwJd

Best tackle – Matthijs de Ligt (Ajax)
A tackle so good that it earned him his first international call-up for the Netherlands on Friday. The 17-year-old, ball-playing centre-half has already been compared to Jan Vertonghen. Lovely.

Perhaps Josh King forced his hand. The Norwegian performed so well as a No 10 of sorts against the Hammers that his reward for a hat-trick was to be pushed into a slightly more advanced position. Howe made one change in terms of personnel for the game against Swansea, but the introduction of Andrew Surman for Harry Arter allowed a more attacking approach. King joined Benik Afobe in a 4-4-2.

“It has changed the dynamic slightly but I wouldn’t say it was a huge shift from what we had,” Howe said of the formation switch after a 2-0 win. “You might lose the total control or element of control that you want but you are adding a goal threat and maybe a counter-attack threat that possibly you didn’t have before.”

Less control or not, the plan worked. A first clean sheet of 2017 suggests the bravery paid off as much in defence as it did in attack.

Worst tactical move – Arsene Wenger
“They score more goals than anybody else on set-pieces,” said Arsene Wenger at his press conference on Thursday. By Friday, quotes emerged of the Frenchman discussing West Brom’s aerial prowess further:

“West Brom have strong deliveries. The best way for us is to take the game to them and not to be too much on the defensive side and not have too many set-pieces against you.”

Even as late as a few minutes before kick-off on Saturday lunchtime, only one subject remained at the forefront of the Arsenal manager’s mind. “We have to be competitive on that front,” he said in his pre-match interview. “They score 47% of their goals from set-pieces.”

Wenger had carefully presided over the framing over the joke, and had delicately structured the narrative. He ensured the punchline was delivered with a crashing inevitability and predictability that only his side can truly achieve.

Arsenal knew exactly what awaited them at The Hawthorns on Saturday lunchtime. They predicted it, openly discussed it, almost bragging that they knew what would happen. West Brom did not err from the script, not even an improvised word, and yet the Gunners forgot to rehearse their lines.

Fourteen of the Baggies’ 36 goals had been scored from set-pieces before the weekend; now it is 16 of 39. Two more from corners, two more from Craig Dawson, two more occasions to expose Arsenal’s complete lack of preparation.

It might just be the jump start the Polish defender needed for his loan. Since joining in January, Bielik has played just four games, starting only three. His future is seen by some as a central midfield destroyer, but he has impressed when given the chance at centre-half. It was no different against Newcastle – the second tier’s leading goalscorers – as he made three tackles, two interceptions and six clearances, and he had the most touches for the hosts (65). He even defended a couple of set-pieces without sh*tting himself.

Celebration of the week – Roberto Firmino

Firmino with the celebration and everything pic.twitter.com/hT2rTVWfpf

‘After the half-time whistle, and as I was walking down the tunnel, Tim Sherwood of Swindon Town approached me and said “You’re the only f***** in the ground that’s f****** seen it you f****** mug”. He then started pointing aggressively in my face.

‘I told him to calm down and stop pointing at me or he would be sitting in the stands for the second half. He then continued “I wasn’t even in the dugout you f****** mug and you would be doing me a favour”.

‘I told him I wanted to speak to him at my dressing room but he ignored me and walked off towards the Swindon changing room. I followed him and stood outside and told the coaching staff I wanted Mr Sherwood to come outside as I needed to speak to him.

‘After approximately 45 seconds Mr Sherwood walked out and walked past me and I informed him that he would be reported for his comments towards me.

‘His reply was “f*** off you mug”. I then entered my dressing room area and informed the stewards of my decision and that if Mr Sherwood tried to come down into the technical area he should not be allowed.’

Dembele of the week – Siramana Dembele (FC Nantes)
Sergio Conceicao knew. He was the man credited with leading his FC Nantes side to a Ligue Un draw against high-flying Nice, but he knew. He knew that this victory was secured not by his hands, but by those of Siramana Dembele. The 40-year-old had been named one of Conceicao’s assistant coaches in December, and he and he alone has guided them clear of relegation ever since his appointment. Siramana first received this award as assistant at Portuguese side Braga in October. Our baby boy is moving up in the world.