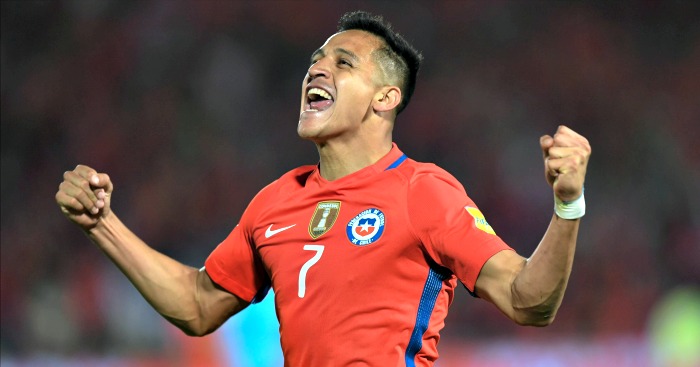 Hamstrings? Pah. Most, after suffering a low-grade muscle injury, would rest, making sure not to exert any strain or stress on the problem area. So when Alexis Sanchez sat out his country’s World Cup qualifier with Colombia last Thursday, it was expected he would do the same against Uruguay five days later. But there were two issues. First, Chile needed to win; they sat fifth in CONMEBOL qualifying before the game, with only the top four sides in the group advancing to the 2018 World Cup. They had just six games remaining, and their next fixture was against Uruguay, who were only one point behind leaders Brazil in second.

The other issue? Alexis Sanchez is not like you or I. His hamstrings are not comprised of muscles or tendons; they are made from the fear of his opponents. Arsenal fans said their prayers, ate their vitamins and hugged their Gunnersaurus doll before crying themselves to sleep on Tuesday evening. They awoke Wednesday morning to their partners wondering whether it was all worth it anymore, as well as the news that the 27-year-old forward had played 85 minutes, emerging without injury and scoring two goals to inspire a 3-1 comeback victory. It put Chile’s qualifying campaign firmly back on track, and Manchester United are next.

Football League player – Nile Ranger (Southend United)
Let it never be said that Phil Brown does not have a way with words. “Nile is a big No 9 for me,” said the full-time Southend United manager, full-time orange man in August. “He’s got ability, that’s without a shadow of a doubt unquestionable,” the former Hull City manager continued, attempting to convince himself that signing a striker with 17 goals in 127 league games was a good idea.

Brown continued. “He can control the ball and play the kind of football that only some people can dream about.” It was difficult to invest in his words, considering Ranger had neither played a first-team game nor scored a goal since November 2014. But League One Southend gave the former Newcastle striker a one-year contract regardless. On Saturday, they were rewarded as the 25-year-old scored his first league goals in 735 days in a 4-1 win at Bury.

Best goal – Duncan Watmore (England Under-21s)
It might have been in vain as Aidy Boothroyd’s young England side were defeated for the first time in 15 games, but Duncan Watmore scored a rather lovely goal against France on Monday. The Sunderland forward cleverly evaded the attentions of Presnel Kimpembe, nutmegging the opposing captain, before lobbing Thomas Didillon from outside the area. He must have learned it from Victor Anichebe.

An extravagant chip from @SunderlandAFC's Duncan Watmore was the pick of the #YoungLions goals against France U21s. https://t.co/J3REMyA7j6

Best pass – Adam Lallana (England)
The Liverpool midfielder’s curved pass into the path of Jamie Vardy was so bloody good it rendered the Spain defence obsolete and meant that the Leicester striker could still earn a penalty despite his horrible first touch. This is what living next door to Jurgen Klopp for a prolonged period of time does to a man. It changes them. It improves them. It makes their football as beautiful as their facial hair.

Of course, for some, that pass was just a ‘long ball forward’, something ‘straight out of the English football textbook’. Sure.

Best tactical move – Tim Sherwood (Swindon Town)
Last Thursday, Tim Sherwood was appointed Director of Football at Swindon Town. Two days later, the Robins cruised to a 3-0 victory over Charlton, with the future England manager in attendance. It was only their fifth win in 17 League One games, and their second in their last 11 fixtures. The Sherwood effect, we shall call it.

Worst tactical move – Tim Sherwood (Swindon Town)
“I am coming here to help out,” said Tim Sherwood upon being appointed Swindon Town’s Director of Football. “I think it needs tweaking, possibly the style of play at times, sometimes we might need to flip the page a bit.”

Swindon added that the 47-year-old will “head up all aspects, including transfers, the way we play, the formations and the picking of the team”. So Sherwood will presumably accept any and all criticism of the club’s approach in the 3-1 FA Cup first-round defeat to non-league Eastleigh on Tuesday. The former Aston Villa and Tottenham manager descended from the stands when the Robins went 1-0 down in front of their home crowd. He stood in the managerial dug-out. He gave orders. He waved his arms about a bit. Swindon went on to lose 3-1. The Sherwood effect, we shall call it.

Premier League loan player – Lewis Baker
A goal in the 3-2 victory over Italy U21s last Thursday was lovely. Another strike – his seventh in 12 games at that level for England – as well as an assist against France softened the blow of a 3-2 defeat. And then the Chelsea midfielder, on loan at Vitesse, made his debut on our famous England ladder. Lucky thing.

Joke of the week
“I’ve no idea what will happen now. We’ve got an Under-21 finals to prepare for and I need to know where I’m going to park my car!”

Gareth Southgate had been on the shandies.

Hindsight of the week
Each of the below are all quotes from an article dated June 22, written by Mark Ogden, then of The Independent. It was titled: ‘Why England should chase Jurgen Klinsmann to take over from Roy Hodgson’

‘Five years into his reign as head coach of the States, Klinsmann has only enhanced his reputation.’

‘Klinsmann would also bring charisma, experience and a proven track record to the job.’

‘Klinsmann has also made it happen as a coach.’

‘His time with the States has also elevated that nation as a respected force on the world stage.’

‘Klinsmann answers each of the FA’s criteria for the role of England manager, but it appears that the blinkers are on and that the search may yet be restricted to within the confines of the Premier League.’

So, how did the United States fare over the latest international break? They lost 2-1 to Mexico and 4-0 to Costa Rica, the latter defeat representing their worst in World Cup qualifying in 36 years. It leaves them sixth and bottom of the CONCACAF qualifying group after two games. Only the top three advance to the finals in Russia. That went well.

Warning of the week
“I don’t need him to apologise. I’ll see him soon” – Eric ‘Danny’ Dier to Ander Herrera.

Third-person reference of the week
“The fans will get everything. They’ll get Steve Evans’ life.”

Tattoo of the week

Worst PhotoShop of the week. Or any week.

We've done it. We've found the single worst PhotoShop of all-time. Ever pic.twitter.com/8Sa6Xr1CCD

Dick move of the week – Thomas Muller
“I don’t understand the point of such uneven games like these, even more so because of the crowded fixture list. I understand that for them it is special to play against the world champions, I understand also that they can only defend with tough tackling. For this reason, though, I wonder if these are not games which bring unnecessary risks.”

The Bayern Munich forward had been reduced to playing international football for Germany against San Marino. Poor thing. What are the odds on thebettingsites.com of any sympathy?

Dembele of the week – Moussa Dembele
When you make a defence of Dominic Iorfa, Rob Holding, Alfie Mawson and Kourtney Hause look collectively amateur, you know you are deserving of becoming the first-ever multi-time winner of the Dembele of the week award. And with two goals and a virtuoso performance for France Under-21s in a 3-2 win over their England counterparts, Moussa did just that.