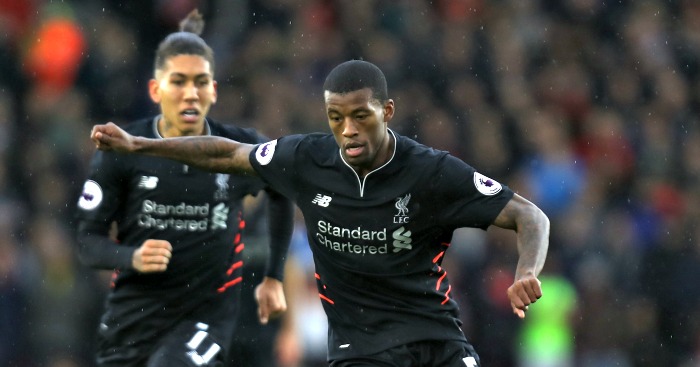 Premier League player – Virgil van Dijk (Southampton)
Yaya Toure was considered, as was Salomon Rondon. Joel Matip was also excellent for Liverpool on Saturday, but his was not even the most accomplished defensive performance at St Mary’s. That accolade goes to Virgil van Dijk, who helped silence Roberto Firmino, Philippe Coutinho, Sadio Mane and James Milner in a 0-0 draw for Southampton. The Dutchman was imperious in the air, strong in the tackle, lightning quick on the ground and integral to a fourth clean sheet of the Premier League season. One particular challenge on Mane in the first half was wonderful. He made two tackles, two interceptions and two clearances, as well as blocking two shots. With all due respect to Messrs Toby and Laurent, is there a better centre-half in England’s top flight?

Football League player – Omar Bogle (Grimsby)
Two goals for Grimsby in a 3-0 win over League Two leaders Plymouth on Saturday was followed with one more in a 2-2 draw with Carlisle on Tuesday. Omar Bogle, who commits the cardinal sin of describing himself as a ‘maverick’ on his Twitter profile, has now scored more league goals (13) than six Premier League clubs. As the chant goes: “Omar Bogle, Omar Bogle, Omar, Omar.” That says it all.

European player – Cristiano Ronaldo (Real Madrid)
Be honest, you thought Cristiano Ronaldo was finished, didn’t you? The Real Madrid forward had scored a meagre five goals in eight La Liga games before the weekend, and looked a shadow of the player who once embarrassed John O’Shea thoroughly enough that the Irishman was forced to lie about being jet-lagged. Answering his critics as emphatically as possible on Saturday, the Portuguese scored a match-winning hat-trick in a 3-0 derby win over Atletico. Since moving to Spain in August 2009, Ronaldo has scored three or more goals in a match on 32 occasions; Aston Villa have done so 27 times. Let’s all just take a brief moment to laugh at Aston Villa.

Best goal – Roberto Pereyra (Watford)
What better way to interrupt that moment than to discuss a quite wonderful goal. When Sebastian Prodl launched a 30-yard ball to the left wing from inside his own half on Saturday, few expected Roberto Pereyra to achieve something few had managed in all of last season. But within five seconds Watford’s club-record signing had managed to make Dannys Simpson and Drinkwater look like Dannys Simpson and Drinkwater with some well-disguised footwork, a drop of the shoulder and a tasty curling finish.

#ThatMomentWhen you think the steward is your unmarked left-back ? [via @SkySportsEFL]https://t.co/oBUDIwvC41

What do you mean that’s the 427,000th time you’ve seen that pass since Saturday? Fine then.

Actual pass of the week – Georginio Wijnaldum (Liverpool)
Previous winners of this award include a raking cross-field ball, a backheel assist and a defence-splitting pass. Sometimes simplicity is the key however, as was the case with Georginio Wijnaldum’s delightful through ball against Southampton for Liverpool. The summer signing’s first touch after a routine lay-off from Roberto Firmino was to release the onrushing Sadio Mane with an inch-perfect pass directly into the forward’s stride. It was something matched only by the aforementioned intervention from Van Dijk.

Best tactical move – David Moyes (Sunderland)
Logic dictates that, after winning your first Premier League match in 11 attempts the previous week, you should change as little as possible for the next fixture. Fortunately for Sunderland, David Moyes recognised that a home game against Hull City represented a different kind of test to the trip to Bournemouth prior to the international break.

From the simple but necessary switch from a defensive 4-5-1 formation to a more attacking 4-3-3, to the decision to trust Jordan Pickford despite the return of Vito Mannone, to utilising Jason Denayer in a defensive midfield role in the absence of Lee Cattermole and Steven Pienaar, David Moyes did what he had not done in a long, long time: He got the big calls right. A 3-0 win and back-to-back victories is his reward. And probably a big old hug off Victor Anichebe.

Worst tactical move – Arsene Wenger (Arsenal)
He is undoubtedly an icon of the modern game, but that does not mean Arsene Wenger is immune to making mistakes. A Manchester United side competing at a level slightly above average should not have been a problem for this Arsenal side.

There was the non-selection of Granit Xhaka, leaving a central midfield of Francis Coquelin, Mohamed Elneny and plenty of willing but scant creativity. There was the bizarre deployment of Alexis Sanchez as a deep-lying playmaker, the Chilean surely acting under orders as he insisted on dropping into midfield in search of possession all too often. There was a cautious approach in a crucial game which meant that Olivier Giroud’s 89th-minute header represented Arsenal’s first shot on target of the game, and their first shot of any kind in the second half.

Worst of all was the decision to play Aaron Ramsey on the left wing. 16 Conclusions covered it in depth, but the Welshman is not of the requisite standard to be crowbarred into this side in an unfamiliar position. Arsene got away with this one, and Jose bloody let him.

Premier League loan player – Joe Hart (Torino/Manchester City)
Pep Guardiola would cry tiki-taka tears at a pass completion rate of 62.5%, but the goalkeeping purists will point to Joe Hart’s five saves for Torino in the 2-0 win over Crotone and shrug their shoulders. Who cares if he’s starting attacks from the back or booting the ball into row Z, as long as he is not picking the ball out of his own net?

Hart’s third clean sheet of the season helped lift his loan club to seventh in Serie A, and firmly into the hunt for European qualification. Torino finished 12th last season, and conceded 55 goals in 38 games. With Tom Heaton’s superior as their No 1, that has become just 16 goals in 13 games this campaign.

Embarrassing dad moment of the week

‘In an era when “bantz” is so prominent, understanding fully how to communicate to a team with a spine of English players and good English speakers can make a huge difference.’

The Sun’s Andrew Dillon explains how to be hip and cool. And how Tottenham could win the Premier League.

Zlatan quote of the week

“Lots of people stay in one place throughout their career, but I’ve travelled around like Napoleon, and conquered every new country where I’ve sat foot. So perhaps I should do what Napoleon didn’t and cross the Atlantic and conquer the States as well.”

Napoleon never went on a run of just one goal in 11 games in all competitions, Zlatan.

Response of the week