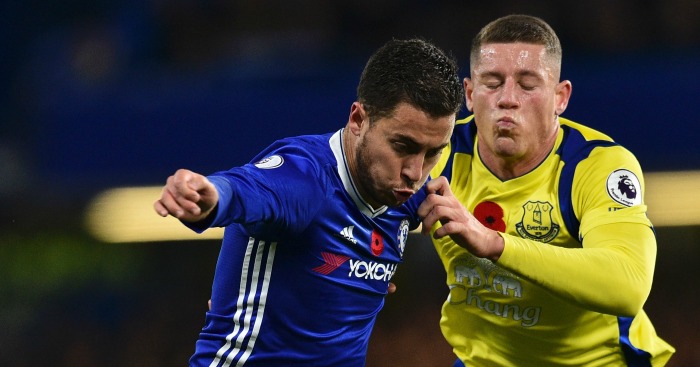 Premier League player – Eden Hazard (Chelsea)
Let me show you behind the curtain and reveal messages between Sarah Winterburn and myself on Sunday evening:

Sarah – ‘Just watching Chelsea highlights. F**k me they look good.’
Me – ‘It’s that second Hazard goal isn’t it? You just think oh f**k, they mean business here.’
Sarah – ‘I made a noise.’

As well as revealing our potty mouths, this replicated conversations up and down the country, played out internally or expressly to the person next to you. Or the person on the other end of a phone. I was supposed to be writing about Pedro on Saturday evening, but sometimes you have to stop what you’re doing and just watch.

At the heart of every Chelsea attack was Hazard, whose return to form feels more permanent with each passing week. The Belgian scored twice and has now won three consecutive man of the match awards.

Football League player – Tom Ince (Derby County)
He may have turned down Inter Milan in favour of Hull City (or indeed done nothing of the sort), but is Ince finally beginning to realise his potential at Derby? After a rough start to the season, he’s been excellent in both of Derby’s last two matches.

Against Wolves, Ince was comfortably the game’s best player. His composed left-footed finish from close range gave Derby the lead, and he then earned and scored a penalty to make it 3-1 in the second half. Ince had four shots on target in the match (no other player on the pitch had more than one), and misplaced one pass in 90 minutes.

European player – Mohamed Salah (Roma)
On Sunday, Salah become only the fourth African to score a hat-trick in Serie A after George Weah, Patrick Mboma and Kevin-Prince Boateng. Away from the misery of his Chelsea spell, he’s again becoming an exciting winger capable of making any full-back look silly.

Best goal – Paul Pogba (Manchester United)
Oh my. Manchester United did not sign Pogba for £89m for moments of brilliance but entire seasons, but we’ll enjoy the moments whenever they appear. I’ve seen Pogba’s goal described as a volley and half-volley by lexical criminals, but there’s no doubt it was a sweet, sweet shot. The technique for a player with such long legs to get over the ball and control the trajectory of the ball is outrageous.

Best save – Costel Pantilimon (Watford)
When he woke on Sunday morning and knew he’d be on the bench at Anfield, Pantilimon probably didn’t envisage that he’d make his Premier League Hornets debut, concede four goals and produce a brilliant double save on the same day.

At first glance, Daniel Sturridge’s curling shot strikes the bar, with the goalkeeper then expertly blocking the rebound with his feet. Replays showed that Pantilimon had actually touched Sturridge’s strike onto the frame of the goal, thus making a good single save into a great double one.


Best pass – Pedro (Chelsea)
Sometimes with goals like Eden Hazard’s second against Everton, the notion of assist can be lost. One simple pass to a player 50 yards from goal who then goes on to beat five defenders and the goalkeeper shouldn’t be worth the same as a beautiful cross that finds a striker unmarked.

Yet this was the exception to that rule. Hazard may have started the move before dribbling into the penaly area and guiding the ball into the bottom corner, but the goal was only made possible by Pedro’s backheel flick. Not only did it take two Everton players out of the game, but it allowed Hazard to sprint onto the ball without breaking stride. Swoon.

17 – Liverpool recorded more shots on target today than any other team has managed in a PL match since Opta records began (2003-04). Top.

Best tactical move – Aitor Karanka (Middlesbrough)
Let’s go to Middlesbrough correspondent Marten de Roon for details: “The coach said to us at half-time: ‘Don’t be afraid. Play with confidence. You are in the Premier League. Show them you deserve to be here. Show what you are capable of and what your game is.’ Me, Adam Forshaw and Adam Clayton, we pushed further up the field and we were able to create a bit more pressure. We took four or five balls from them and were able to make some good counter-attacks.”

Helping others to help themselves; lovely.


Worst tactical move – Ronald Koeman (Everton)
Covered by our early loser column, Koeman deserves commendation for at least coming up with a proactive tactical plan. He deserves criticism for landing on one that failed to get the best out of any of his players.

"That's the goal of my career."

I did try and tell you he was better than Xabi Alonso.

FA Cup performance – Westfields FC
I have been to watch Coventry Sphinx a few times recently, a team who play in the same division as Westfields, so it’s difficult to comprehend that they could have reached the FA Cup first round. For the Hereford-based team to be leading Curzon Ashton with ten minutes to go was astounding, but a replay is the least they deserved. Back to the Midland Premier League, Westfields play Tividale on Wednesday, Sherwood Colliery in the FA Vase on Saturday and then the replay against Curzon Ashton on Monday. The league game against Loughborough University the following day has at least been postponed.


Premier League loan player – Joel Campbell (Sporting)
Yes, I assumed that he’d left Arsenal on a permanent deal too, but Joel Campbell is currently doing very nice things for Sporting in Portugal. He’s scored three league goals in 288 minutes, and also played a part in Champions League games against Real Madrid and Borussia Dortmund. Against Arouca this weekend, Campbell scored one goal and assisted another. Give him another chance, Arsene.

Dembele of the week – Denis Dembele
Oh sure, Mousa was the best player in the north London derby, but we’re tired of referees not being given the respect they are due. It’s all players this, managers that. Sick of it.

So, step forward Denis Dembele, an international referee from the Ivory Coast who took charge of the Ivorian Coupe Houphouët-Boigny final. It’s effectively their equivalent of the Community Shield, between the league champions (AS Tanda) and the cup winners (Séwé Sport). Denis is not mentioned in the one report we found, so he must have had a good game.

Weird phobia of the week

In Arsenal programme, Olivier Giroud reveals that, aged 10, he had an irrational fear of the 1980s sitcom character ALF pic.twitter.com/efcbKqdaUM

Best RESPECT of the week

Lest we forget.. ready for our rememberence day game vs @WBA pic.twitter.com/Zbz8dNFzVQ

Because there is no better way to pay your respects and take a moment of quiet remembrance than by trampling on a dark green poppy in football boots.


Compiler of the week – Daniel Storey