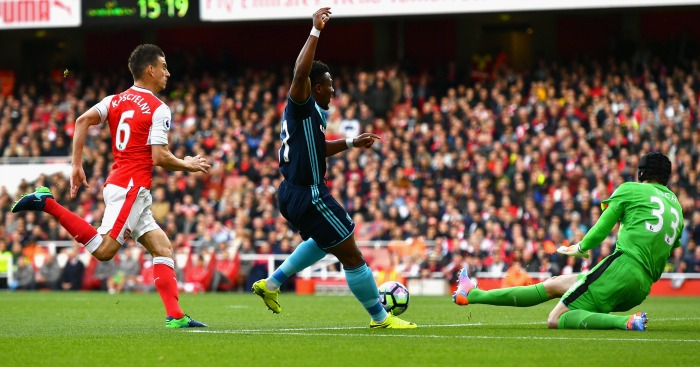 Premier League player – Shinji Okazaki (Leicester City)
Xherdan Shaqiri will presumably be composing a strongly-worded letter of complaint in response, but my vote lies with Okazaki. As I said in Winners and Losers, he is Leicester’s quiet star, the forward who can do it all. Track back? Sure. Bring others into play? Sure. Score goals? Sure. Create chances? Sure. Get easily overlooked in favour of those around him? Sure.

Football League player – Ayoze Perez (Newcastle United)
It has been a difficult start to the season for Perez, who has been forced to sit on the bench as Dwight Gayle shows him just how to score regularly in the Championship. Given a rare chance on Saturday, Perez grasped it with both hands. The Spaniard scored the fastest goal of the Championship season, and followed it up with a second in the second half, before returning the favour and setting up Matt Ritchie. He then struck in the 6-0 rout of poor Preston. What if Newcastle never lose again?

Actually, that is the only blip in a pretty decent club career. Having scored 38 in 79 league games for Hajduk Split as a youngster, he has managed 37 in 86 for Dnipro and 16 for Fiorentina after just 33 league starts. Still just 28, he scored a hat-trick and assisted another goal during their 5-3 win at Cagliari.

Best save – Petr Cech (Arsenal)
Look, I’ve watched the video and there just weren’t that many brilliant saves this weekend. I love Hugo Lloris like a dear brother, but there was a strong ‘ball to man’ element to his save from Charlie Daniels.

Instead I’m giving it to Cech for his double save from Adama Traore and Alvaro Negredo. Both were with his legs and both involved him sprawling at the feet of an onrushing attacker. Love me, internet Arsenal fans. Love me like you love polls and the words ‘Maureen’ and ‘Manure’.

Fernandinho's pass in the build up to City's equaliser today – unreal technique and vision ?pic.twitter.com/faQwXxmxfV

Big fan of any accurate long pass that uses exactly the same technique as a golf drive.

Best tactical move – Aitor Karanka (Middlesbrough)
A subtle tweak, but in turning Middlesbrough’s 4-2-3-1 into a 4-5-1 with three central midfielders and two genuine wingers, Karanka gave added protection to his defence and used the wide players as the principal threat. Adam Traore was brilliant, the defence was far more composed than in recent weeks and Middlesbrough should have won at Arsenal.

Worst tactical move – David Moyes (Sunderland)
Of course you can understand why Moyes tried to hang on for a point at West Ham, but his defensive substitutions invited the pressure that eventually told in injury time. Billy Jones came on for Wahbi Khazri, Lynden Gooch replaced Duncan Watmore and Paddy McNair for Steven Pienaar. Sunderland sat back and West Ham, who had struggled to create chances, could pour men forward. Cue a goal eight seconds from the end of stoppage time.

We’re still in a post-dance era.

Premier League loan player – Nabil Bentaleb (Schalke)
Hey, remember him? Bentaleb was pushed so far to the back of the wardrobe by Mauricio Pochettino that he fell down the back, never to be seen again. The midfielder (still 21!) is on loan at Schalke with a view to a permanent move, and scored two delightful goals in the 3-0 defeat of Mainz this weekend.

“Players only call themselves No. 10s because they can’t score goals,” Tim Sherwood once famously said. Your best mate’s wearing 10 at Schalke and scoring goals, pal.

Performance art of the week


Dembele of the week – Bira Dembélé (Barnet)
Moussa may have scored the winner for Celtic in the Old Firm derby, but does that really compare to Bira selflessly dropping to the bench after a 4-0 defeat to subsequently see his team win 2-0 at Wycombe? No, it doesn’t. This was proper football.

And indeed the year.


Compiler of the week – Daniel Storey