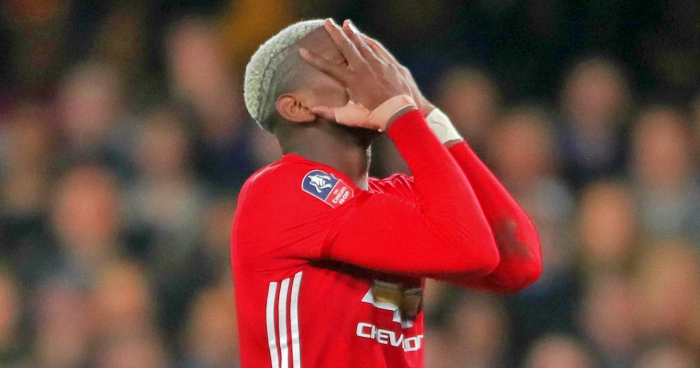 FA Cup player – Paul Pogba (Manchester United)
Who am I to argue with the winner of the 2003 Supertaça Cândido de Oliveira?

Premier League player – Josh King (Bournemouth)
“When I first started to work with him, I believed he could be anything he wanted to be,” said Eddie Howe of Josh King at the weekend. Quite why the Bournemouth striker ever harboured the dream of being the 160th different goalscorer of a Premier League hat-trick is impossible to say, but that is precisely what he wanted to be. So it came to pass that the 25-year-old hit a match-winning treble against West Ham, combining the feat with missing a penalty, to grant his club their first victory of 2017.

Football League player – Ryan Sessegnon (Fulham)
If Ryan Sessegnon was not already a desirable commodity for a number of Premier League clubs, his performance on Saturday edged him closer towards the promised land. And if no club is willing to take the risk on spending a possible eight-figure sum on a 16-year-old, he might reach the top flight regardless as Fulham march towards the play-offs.

The Cottagers headed into their weekend fixture on a six-match unbeaten run, but a visit to table-topping Newcastle put their form in immediate jeopardy. Tom Cairney settled the away nerves with a delicious strike after 15 minutes, but it was Sessegnon who sealed a massive victory with a second-half double. He was crowned man of the match, but will have to wait until May 2018 to legally drink the champagne.

The left-back, deployed as a winger here, finished smartly for his first, before rounding off a flowing counter-attack with some nifty footwork and a confident strike seven minutes later. His father, Sunderland legend Stephane, must have been so proud.

European player – Memphis Depay (Lyon)
A little over 24 hours before Jose Mourinho played a formation with six defenders and a Phil Jones attack dog set to ‘Maul Eden Hazard’ mode in a 1-0 defeat, one of his cast-offs was continuing to show that there so often is life after Old Trafford.

Memphis Depay was pretty widely ridiculed for daring to drive expensive cars and wear silly hats during his time in England. Such behaviour is only admissible when you do good football, and good football is precisely what the Dutchman is doing in France with Lyon. He continued his excellent recent form with two goals in a 4-0 win over Toulouse. He also completed at least four more dribbles than any other player, created the most goalscoring chances (3), and even made two tackles.

Considering Lyon look likely to reach the Europa League quarter-finals, beating Roma 4-2 in the first leg of their last-16 tie, it makes me cry a little bit that he already featured for United in the competition this season. A reunion in the knock-out stages could have been beautiful.

Best goal – Memphis Depay (Lyon)
I wonder if L’Equipe hounded him about his choice of transport after this.

Best pass – Pedro Obiang (West Ham)
West Ham fans have had little to cheer recently, but the performances of Pedro Obiang have been the crust to the shit sandwich that has been this season. The midfielder signed for a nominal fee in summer 2015, and is proving to be a bargain.

As it happens, he was as culpable for West Ham’s defeat to Bournemouth as any of his teammates – although he was the only one tasked with doing both his and Mark Noble’s jobs. But even in a difficult game, Obiang produced a moment of wondrous ability and vision, eliminating the opposition defence with a perfect pass to Sam Byram, who centred for Andre Ayew to equalise with seven minutes remaining. Then Josh King rounded off his hat-trick, and we all remembered how funny it is to laugh at West Ham.

Pass of the season that by Obiang for me. Superb by Byram as well. Who knew playing a RB at RB would yield success?

Best save – David de Gea (Manchester United)
Let’s hope Ed Woodward doesn’t accidentally set fire to the fax machine before throwing it out of a window this summer. David de Gea’s double save – the first from Eden Hazard, then the second from the equally dangerous Gary Cahill about 30 seconds after – brought with it a sense of familiarity. It was almost as if Louis van Gaal was in the dugout again.

Best tackle – Mats Hummels (Bayern Munich)
The best part about this tackle from Mats Hummels is not the tackle itself. It isn’t even the celebration afterwards. It’s his reaction after the game.

“I don’t need to be modest,” he said post-match. “I liked that tackle. It was an amazing tackle.” Wonderful.

“It’s baffling. When there are a lot of people out there who know about the Premier League, about what’s required to dig in. He’s not got a clue,” proffered Phil Thompson. “It’s just another slap in the face to British coaches and managers,” he added.

Marco Silva would be forgiven for raising a solitary finger and waving it in the direction of the two Sky Sports pundits after their ill-advised rant in January, but the Hull City manager is too bloody suave for such crass buffoonery.

What the Portuguese will do is continue his job quietly and efficiently in the hope that he can drag the Tigers to an unlikely Premier League escape act. Since Merson and Thompson’s comments, Hull have accrued 11 points – the same as Liverpool, and more than both Manchester United and Arsenal.

The latest example of the 39-year-old’s ability to “dig in” came on Saturday, when Swansea visited the KC Stadium for a titanic clash. Lose, and Hull’s hopes of survival would hang by a thread. Win – and win they did – and they are one point from safety.

A fixture of such delicate importance had to be handled with care, and for an hour Silva ensured that his Hull side were solid in defence against a dangerous Swansea side. He fielded a 4-1-4-1 formation, with a three-man central midfield of Tom Huddlestone, Alfred N’Diaye and a roaming Sam Clucas shielding the defence.

But a draw was not enough, and Silva knew it. He spoke after the game of how Hull “work two systems and the players know what we want”, and what they wanted, what they needed, was a victory.

Fortune favours the brave, and the manager replaced one of his midfielders, N’Diaye, with a second striker, Oumar Niasse, on 63 minutes. Moments later, the loanee opened the scoring. Within a quarter of an hour of his introduction, the substitute scored his second. Alfie Mawson scored a late consolation, but Hull had secured three vital points.

What’s he know about the Premier League indeed.

Worst tactical move – Tony Pulis (West Brom)
The only Premier League defeat Everton have suffered at Goodison Park this season was inflicted upon them by Liverpool, who scored a last-minute winner in December’s Merseyside derby. And so few truly expected West Brom, victors in just three of their 12 away games this campaign, to close the points gap on their hosts with a win.

Tony Pulis did himself and the Baggies no favours. But the Welshman made his crucial mistake two weeks ago, not on Saturday. A comfortable 2-1 win over Bournemouth in February pushed West Brom onto 40 points, and into accusations of beaches, holidays and merriment.

The inevitable 3-0 loss to Everton, having secured that magical points total a full 12 games early, continued a popular Pulis trend. Across nine seasons as a Premier League manager at Stoke, Crystal Palace and West Brom, Pulis has now managed 36 top-flight games after reaching 40 points. He has won just five.

Premier League loan player – Jeremain Lens (Sunderland and Fenerbahce)
Jeremain Lens might just get his wish. He was reported to have said that “many things will be easier if Sunderland drop down” this season, but his parent club’s plight might be irrelevant. His form in Turkey has seen him linked with the holy trinity of Fenerbahce, Besiktas and Galatasaray. Good luck naming another Super Lig club.

Lens’ latest efforts resulted in a 3-2 comeback victory for Fenerbahce, which keeps them fourth and in contention for a Europa League spot. The winger assisted the second goal, but also created four scoring opportunities, and completed five dribbles. Sunderland as a whole have created 6.6 goalscoring chances per game this season, and have completed 8.8 dribbles. Just imagine if they lived their life through a Lens.

Opinion of the week

Carragher summing up the joys of doing punditry with Jamie Redknapp. pic.twitter.com/Hd09F3gJDi

Fan of the week

Dembele of the week – Aliou Dembele (FC Niort)
To be honest, it was not a solid week all round for the world’s Dembeles. Mousa didn’t make the Tottenham squad for their win over Millwall. Moussa was overshadowed by Rangers’ Clint Hill. Bira was benched as Barnet drew with Crawley. Denis didn’t even referee a bloody match. The award this week therefore has to go to Aliou, the quiet hero who captained Niort to a 2-1 victory over Valenciennes.