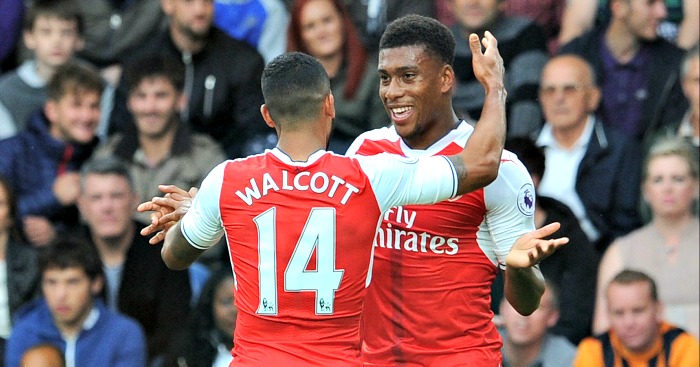 Premier League player – Nacer Chadli (West Brom)
Kevin De Bruyne was phenomenal for Manchester City but a) he won this award last week, and b) he will win it many, many more times this season. It’s time to share your toys, Kevin.

Last season, Chadli was a bit-part player at Tottenham. This campaign, he is already staking his claim to be the focal point of a Tony Pulis attack, which is generally an honour bestowed upon only centre-halves or towering strikers. But the £13million signing showed his worth against West Ham with two goals and two assists. He scored three goals and assisted two in 29 league games last campaign.

Football League player – Scott Hogan (Brentford)
Be prepared to hear about the ‘next Jamie Vardy’ very soon. Scott Hogan has travailed the lower leagues, featuring for Halifax Town and Stocksbridge Park Steels, both former stomping grounds of the Leicester striker. Still aged just 24, he now finds himself at his seventh club. And just as Vardy impressed for Leicester in the Championship, Hogan is starring for Brentford, capturing admiring Premier League glances along the way.

It has been a hellish couple of years for the striker. He joined Brentford from Rochdale in July 2014, and made his league debut against Rotherham the following month. It was in that game that he injured his anterior cruciate ligament, a setback which would be exacerbated further in a training session come April 2015.

Hogan finally played his first full 90-minute match for Brentford in the season-opening defeat to Huddersfield earlier this month, over two years after he joined. Yet he has risen to the challenge with consummate ease, culminating in a delightful hat-trick against Preston in a 5-0 victory on Saturday. No player has scored more than his six goals in eight games.

European player – Christian Pulisic (Borussia Dortmund)
What a bloody week. Last Wednesday, Christian Pulisic became the youngest Borussia Dortmund player in Champions League history; he played 90 minutes and assisted one goal in a 6-0 victory over Legia Warsaw. The following Saturday, he made only his fifth ever Bundesliga start, and played 90 minutes as he scored once and assisted two goals in a 6-0 victory over Darmstadt. He then celebrated his 18th birthday on Sunday.

No wonder Liverpool wanted him. No wonder they still do.

Jordan Henderson’s strike against Chelsea was wondrous, worthy of winning any match. But his celebration was equally entertaining. The midfielder, struggling to come to terms with what had just happened, wheeled away at first, arm aloft, finger pointed to the sky, expression unchanged. His calm demeanour belied the majesty we had just witnessed.

Then Henderson realised the magnitude of what he had just done. As Gary Cahill’s poor clearance fell to the Liverpool captain, he took one touch to set himself, then whipped a glorious dipping shot over the man mountain that is Thibaut Courtois. It was bloody terrific, and it took a few seconds for it to register with the 26-year-old. When it finally did, the boy from Sunderland emerged, as he screamed: “F***ING COME ON!”

He was our early winner of the weekend, and quite right.

Rather hilariously, actual Trasandino keeper Fabian Cerda was rather unhappy with the coverage of the incident after the game. “It was going wide so I left it on purpose,” he said. “Now people say the dog saved the goal, the dog this, the dog that. It bothers me.”

Best pass – Alex Iwobi (Arsenal)
We might want to see a heck of a lot more of Granit Xhaka, but we are more than delighted with the amount of Alex Iwobi we are witnessing at Arsenal this season. It is rather easy to forget that this time last season, the Nigerian was yet to make his debut for the club. It was in that embarrassing 3-0 Capital One Cup reverse against Sheffield Wednesday when Iwobi finally made his inconspicuous bow. Fewer than 12 months later, he is a regular first-team fixture under Arsene Wenger, and was busy making Hull City look all sorts of silly with a sumptuous backheel assist to set up Theo Walcott’s strike on Saturday.

Best performance – Crystal Palace
Much like Kevin De Bruyne can feel aggrieved – and surely will – at not being voted this weekend’s best player, it could be said that Manchester City are harshly done by here. But their excellence against Bournemouth was expected. Crystal Palace’s superiority over Stoke was not quite so predictable.

The 4-1 scoreline was not flattering. Nor was it completely to do with the ineptitude of Mark Hughes’ beleaguered side. Palace were purposeful and dangerous on Sunday, with Andros Townsend, Jason Puncheon and Wilfried Zaha forming an underrated attacking trio behind Christian Benteke. Alan Pardew’s men had double the amount of shots on target as their visitors, had the lion’s share of possession, and recorded only their fourth win of the calendar year.

Best tactical move – Tony Pulis (West Brom)
Talk about a feather in the club shop cap. Tony Pulis is unlikely to make an awful lot of appearances in this section of the weekly awards, but is more than deserving of his inclusion here. His decision to hand club-record signing Nacer Chadli a prominent role behind striker Salomon Rondon paid instant dividends against West Ham. West Brom had played a 4-2-3-1 formation in two of four Premier League games before Saturday, with youngster Sam Field starting as the No. 10 on both occasions. The 18-year-old was bright, but a 0-0 draw with Middlesbrough and a 1-0 defeat to Bournemouth did not reflect well on the attack.

The manager, knowing a change was needed, shifted Chadli from the left-wing to the centre. His reward was two goals and two assists in a comfortable victory. It was the first time a Pulis-managed side scored four goals in a single Premier League game since a 4-0 win for Stoke over Newcastle in March 2011.

Worst player – Wayne Rooney (Manchester United)
You don’t need to be bored any further by words about his performance(s). So let his ‘highlights’ do the talking.

Worst tactical move – Antonio Conte (Chelsea)
In a Premier League campaign featuring managers such as Pep Guardiola, Jose Mourinho, Jurgen Klopp, Mauricio Pochettino, Ronald Koeman and David Moyes, Chelsea fans had every right to be quietly confident. They had employed Antonio Conte, the same man who had outclassed Belgium and outmanoeuvred Spain at the summer’s European Championships. This was a tactical master.

But on Friday at Stamford Bridge, The Godfather and his players were mobbed. Liverpool were effervescent in securing victory, while Chelsea struggled to cope. The Reds pressed their opponents mercilessly, almost forcing them into submission before sweeping ahead with attacking verve. It was hardly a secret that Liverpool would apply pressure from the start, yet Conte elected to sit back and soak it up. It was akin to placing a sponge in the middle of a monsoon.

Then, when presented with an opportunity to secure an unlikely point, Conte fluffed his lines yet again. Diego Costa scored after 61 minutes to make the score 2-1, but the manager waited until the 83rd minute to make his first substitution. A triple substitution, in fact. Only Michy Batshuayi, the £33million summer signing and striker with three goals in five games, remained on the bench.

Read 16 Conclusions from that game for a better insight into the Italian’s first real errors in England.

Dick move of the week

This is how he finds out if your wife is home while you're out. pic.twitter.com/lo9pMnOryX

“Whenever we played, I sought to get the game on my terms, which were relentlessly physical. (In 2009) Thirteen minutes remained. Liverpool were two up, cruising and playing keep ball. The Kop conducted an incessant, infuriating chant of ‘Ole, ole, ole!’ Xabi retained the ball near the corner flag fractionally longer than was prudent. That gave me the opportunity to fly in, and disguise my malicious intent as best as I could. Alonso milked the moment with a barrel roll. I expected a yellow and was shown a red.”

To be fair, whenever anyone retains the ball near the corner flag fractionally longer than is prudent, the only choice left is to leave them in a crumpled heap with a two-footed tackle while your team is losing 3-0. Bravo, Joey Barton.

‘What could have been’ of the week

“Had things panned out differently, I could have made the obsessive debate about the mutual suitability of the Gerrard-Lampard axis redundant.

“All that remained to be agreed with City was the fee, when Rafa Benitez took over from Gerard Houllier. I was in Dubai when I was informed that he had instead decided to sign a kid from Real Sociedad who had just broken into the Spanish national team.”

And a reminder that Barton is currently suspended for Scottish Premiership side Rangers, while Alonso is a first-team player for Bayern Munich.

Oh, and another reminder that Barton has only ever won two Championship titles. Alonso counts two European Championships with Spain and two Champions Leagues with Liverpool and Real Madrid among his 16 trophy wins.

Look at what you missed out on, Liverpool.

Alan Pardew moment of the week
It’s nice to finally have you back, Pards. We thought you’d stay away from the touchline during games after your Wembley jig.

Clairvoyant of the week

EVENTS NEWS: Due to unforeseen circumstances, clairvoyant Trisha will not be appearing in the Kevin Bird Suite tomorrow night.