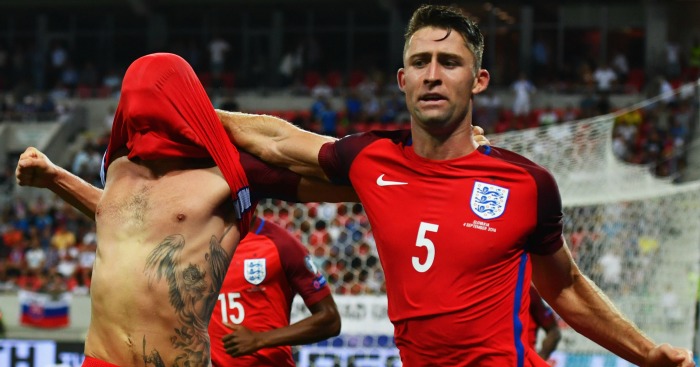 In an era where football celebrations are rehearsed and refined for optimum b*nter, Lallana’s reaction at scoring a last-minute winner for his country was delightful. Forget your dabs, ignore your front flips and place your assorted dance moves kindly in the bin; a good old-fashioned shirt over the head with delirium perfectly encapsulated the moment. It might have only been Slovakia. It might have only been England’s first game of a lengthy qualification campaign. But Lallana celebrated his first-ever England goal exactly as we all did as children in our back garden. Lovely.

Oh, and he played alright too.

Football League player – Scott Shearer (Mansfield Town)
What? Well, if Storey and Winterburn are playing that game, then why can’t I select the hero who kept a clean sheet against Cambridge and is leading the Stags’ promotion charge in League Two?

Fine. In true Sky Sports co-commentator form, the award for Football League player of the week kind of has to be handed to Danny Hylton, scorer of a hat-trick for Luton against Wycombe. It was only his second career treble, and first since 2013.

The 27-year-old joined the club as a free agent in the summer having left Oxford, and has already scored five goals in six games for the League Two leaders. As the focal point of a strikeforce that includes Jack Marriott and Josh McQuoid, there is every chance Hylton can help fire the current highest goalscorers in England to promotion.

But how did Hylton celebrate his hat-trick? “I’ll go back to three kids. My wife’s going out so it will be nothing crazy. It will probably be playing Nerf guns or something and then fall asleep about nine o’clock. It’s all fun.”

European player – Valon Berisha (Kosovo)
Valon Berisha awoke on Monday morning as a 19-cap Norway international; he ended the day as Kosovo’s first-ever goalscorer in a competitive game. The Red Bull Salzburg midfielder was the most high-profile of six players who only received clearance to play for FIFA’s latest member nation just hours before their World Cup qualifier with Finland. The 23-year-old created three chances – more than any other player on the pitch – and converted a penalty on the hour-mark to secure a draw.

Just look at how beautiful this group looks, though.

Best goal – Tal Ben Haim (Israel)
Tal Ben Haim’s first thought was to approach Gianluigi Buffon after Israel’s draw with Italy and ask him for his shirt. The legendary goalkeeper replied by saying that his goal was so good he ought to be the one asking for Ben Haim’s shirt. And we all fell in love with Gigi that little bit more. Seriously though. The only problem with this goal is that it was only the namesake of Avram Grant’s best mate, not the man himself.

Best pass – Thomas Muller (Germany)
‘The grace of a swan wearing ice skates, but he’s just so darn effective,’ read the tweet from Germany’s official Twitter account on Sunday evening. A more accurate description you will not find. Be it effective, efficient or with the utmost effort, Muller tends to make Joachim Low’s side tick – provided he is not playing at a European Championships. But while he is not the most graceful individual, the 26-year-old’s clever and deft assist for Joshua Kimmich’s goal against Norway was wonderful.

Best performance – Spain
So the game was against Liechtenstein, who don’t even boast a professional league. Spain’s 8-0 dismantling of the European minnow in World Cup qualifying was still mightily impressive. ‘Festival’ read the front-page headline from Diario AS, while Marca went for ‘Fiesta!’.

‘Feast’ would have been more appropriate. Julen Lopetegui was linked with the Nottingham Forest job earlier this summer but, if he wasn’t already, he will be fairly content to end up as Vicente Del Bosque’s replacement on the basis of Monday’s performance. Diego Costa, David Silva and Alvaro Morata scored six goals between them, while Sergi Roberto and Vitolo crowned the new manager’s first competitive game in style. It also means Spain have still not lost a World Cup qualifier since March 1993; three players in their current squad were not even born then.

Best tactical move – Sam Allardyce (England)
Calling on the powers of a lucky penny? Eat your heart out, Pep.

Worst player – Hartlepool
Yes, all of them. They did lose 6-1. But don’t allow me to describe their performance, both collective and individual, of the players. Allow their manager, Craig Hignett:

What’s funnier is that they went 1-0 up within four minutes, and that Stevenage, their conquerors, lost 5-2 to Grimsby in their last league game. Aside from that, it went well.

Worst punditry – Clive Tyldesley
It isn’t often that Glenn Hoddle is the most adept commentator or pundit in a room at any one moment, but on Sunday evening the unthinkable happened.

“What have you made of the Sam Allardyce regime thus far?” Hoddle was asked by ITV commentator Tyldesley. The game – and the Allardyce ‘regime’ – was 21 seconds old.

Tactical insight – Sam Allardyce (England)
It might be his second entry this week, but the England manager’s quotes on Wayne Rooney should simply never be forgotten.

“Using his experience with a team, and playing as a team member, it’s not for me to say where he’s going to play.”

You all wanted this. This is your fault.

Dick move – Martin Skrtel (Slovakia)
For Liverpool fans who were supporting England on Sunday, their immediate reaction would still have been a sinking feeling of inevitability, born out of habit after watching similarly idiotic acts from their former centre-half. To stamp on a player at any time is a little bit bloody silly; to stamp on a player when you have already been booked is, well, f***ing stupid. It is the sort of ‘defending’ that Anfield grew tired of bemoaning by the end of the Slovakian’s eight-year tenure. The 31-year-old did not suffer a brainfart; he, in every sense of the phrase, had followed through.

Week of the week
It began with a holiday in Ibiza. It then took in an appearance in the Wembley Cup final for charity, during which he left a YouTube ‘sensation’ floored after a heavy tackle. He called said YouTube ‘sensation’ a ‘pr*ck’ thereafter. After that came the continued goading of Mario Balotelli on Twitter. And it ended with a sparring session with a former British featherweight boxer.

Whatever you did with your week, it was barely half as good as Jamie Carragher’s.

The moment we knew for certain it was international week

WATCH: Do you look like @ManUtd or @ManCity player? Send in your photos using #SSNHQ! https://t.co/CqShhTdi11 https://t.co/cFZsqKfnjQ

Meal of the week
‘First the starters: the fillet steak rolls in black pepper sauce were a cylinder of joy, with the chicken cakes in Tom Yum sauce a zesty promise of good things to come.’