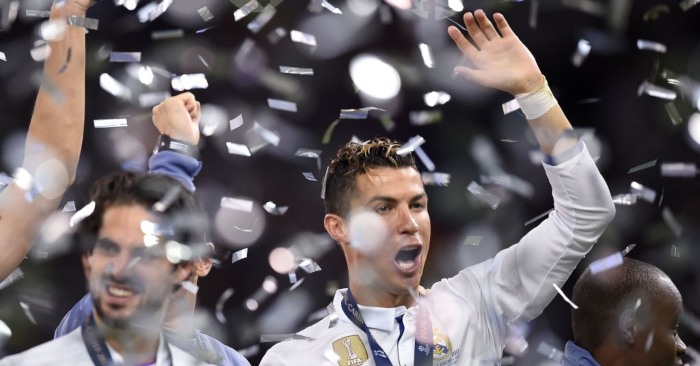 After Tottenham lost to Liverpool in the Champions League final in June, Mauricio Pochettino admitted that he spent “10 days in my house and didn’t want to go out”. As an experienced self-isolator, Poch will probably be in his element right now. But now that lockdown has been enforced, what about the players…

From Celta Vigo to Manchester to the Midlands, they don’t seem to be coping too well. How do they pass the time when not posting look-at-me dance routines or kicking teabags or toilet rolls? Here are some clues…

* Cristiano Ronaldo’s lucky N0.7
Cristiano Ronaldo became a huge fan of bingo after moving from Sporting Lisbon to Old Trafford in 2003. He was given a DVD version of the game as a Christmas present – and now he’s apparently hooked. One wonders if there’s anybody who can hit his numbers.

The self-appointed best player in history said: “It can be very exciting because you can be there waiting for a long time for just the one number to make the game complete.”

In this indefinite period waiting for the next goal, expect the Juventus star to get a full house – at a safe distance of course.

Ronaldo once gave some life-affirming advice in such a situation: “Life is short. So, don’t spend it focusing on negativity. Make the most of it by focusing on pleasure. Listen to music. Take long walks. Sing like a madman. Go crazy. What good is life without a hint of madness?”

He missed out ‘have a w**k’ but otherwise, he has lockdown sussed.

* Moritz Volz goes nuts and bananas
The former Fulham defender was a cult hero with the fans and used to take to the kitchen before a game. In his personal blog, Voltz said ‘When we played the big clubs like Arsenal or Manchester United, I made a biscuit-based cake with bananas and a dusting of green tea. If we were playing against more rugged teams like Blackburn Rovers, I would made something a lot heavier, like carrot cake with nuts.’

Volz was also a big fan of David Hasselhoff. Legend has it that when he had ‘The Hoff’s’ written into his boots against Aston Villa in October 2006, he bagged his first goal in over three years. No doubt he is going through the gears of Knight Order as we speak. Or cycling as his one form of exercise. In every home game, he pedalled his way to Craven Cottage.

A defender quicker than Bolt over 30m. A virtual reality dome for “cognitive training”. A young, genius manager. A super-bright No2 who always thought differently: he used to cycle or walk to Fulham games. A fascinating day at RB Leipzig with Moritz Volz.https://t.co/G1PECuTnwF

* Michael Owen pieces it together
Owen’s Manchester United team-mates mocked the striker by defacing his locker with a ‘Zzzz!’ sticker after the former England man revealed his liking for very large piece jigsaws.

The note, attached with medical tape, was stuck to a magazine cutting which exposed Owen’s passion for completing 1,000-piece jigsaws. Well, Michael has got to find something to do given he doesn’t watch films.

The former Liverpool and England striker once posted a photo of a horse jigsaw scattered across a table, and tweeted that he was ‘about to embark on the biggest challenge of his life’. Let’s hope he has a few in the stockpile.

* Willy Wonka calms Kamara
Before every game, ex-Wimbledon, Huddersfield and MK Dons full-back Malvin Kamara insisted on watching the original Willy Wonka and the Chocolate Factory. He claimed that it eased his nerves. “It’s been my favourite movie since I was little,” said Kamara. “I have it on video and DVD and it just relaxes me before a game. That’s the original film with Gene Wilder though. The Johnny Depp version offends me.”

Well, Depp did manage to get his face on the Peruvian Cup winners’ shirt. Somebody loves ya, Johnny.

* Xavi the mushroom hunter
He may have won the World Cup with Spain in 2010, but Xavi has another passion that almost reached those heights – mushroom-hunting in the mountains of Catalonia. Yes. Put a plate of wild mushrooms in front of the maestro and he will name every one without fail. Very handy if the fruit and veg delivery comes up short.

The 40-year-old, who recently made an appearance at the World Club Championship as boss of Al Saad, really does miss roaming the forests for fungi with Gerard Pique.

“So Xavi should I take a short corner?”

“David there are 4 sub groups of edible mushrooms along the Costa Brava” pic.twitter.com/0wUdLppYNM

* Laurent Koscielny and the triple word score
The former Arsenal skipper showed his true colours to his team-mates at Euro 2016 : “My younger team-mates are more tech-savvy than me. I don’t tweet and they must think I’m like a granddad.”

Some Arsenal fans might be thinking a senior turncoat, Laurent, but do carry on: “I played Scrabble a lot during Euro 2016 with Olivier Giroud, Hugo Lloris and other France team-mates.”

Social media isn’t for Laurent, which is just as well given many thought he ruined his legacy at the Emirates. Nevertheless, at least he won’t have to worry about any pesky pre-season tours in Bordeaux.

* Axel and the hungriest of hippos
Alex Tuanzebe might not be getting many minutes for Manchester United’s first team, but he has shown top form off the pitch on the popular family game Hungry Hippos. The Guinness Book of World Records team were on hand to confirm that Tuanzebe satiated his hipster Hippos in 17.36 – a new record. Despite various attempts to beat the time, including Jamie Redknapp on A League of Their Own, the United defender still holds the record. Really.

Manchester United’s Axel Tuanzebe broke the Guinness World Record for the fastest time to clear a game of Hungry Hungry Hippos ever, at just over 17 seconds! 👀😂 pic.twitter.com/3xFyaJxHQS

* Dimitar Berbatov draws the crowds…literally
The now-retired Bulgarian striker has posted a number of very handy caricatures to his Facebook account, including Marlon Brando in his famous role as Vito Corleone in The Godfather, Snoop Dogg and Bruce Willis.

The former Manchester United and Tottenham man spent his childhood painting a mural of his football heroes on his bedroom ceiling. It was a shame that Berba and Sir Alex Ferguson fell out as it looked like they were an artistic duo: “He (Ferguson) was good with words, probably from all the books he read. I’d go to his office and he’d have Napoleon’s biography on the table.”

Unfortunately, like the great French leader, Berbatov was sent to exile in his last season at Old Trafford before signing for the Cottagers in 2012.

* Toni Kroos plays fast and loose on the oche
Real Madrid’s midfield maestro is a real lover of British culture and none more so when the World Darts Championship hits the screens over the Christmas period. Kroos always tweets his support for the legends of the arrows and has a particular affiliation with Phil ‘The Power’ Taylor, winner of 16 world titles.

Somehow, another former star of the Bundesliga, Luca Toni beat Taylor in this celebrity World tournament game earlier in the year. That technique is…interesting.

* Matt Oakley loves a snapper
The former Southampton and Leicester City snapper set up a fine wine company. However, when he’s finished with the claret, Oakley prefers something more sinister swimming in a much larger tankard of liquid.

“I didn’t want the normal guppies, tetras or angel fish,” he explained after taking a large shipment of red-bellied piranhas. “I wanted something unusual and piranhas certainly make feeding time interesting.”

They look a bit like Roy Keane when he sees Alf-Inge-Haland in the vicinity.