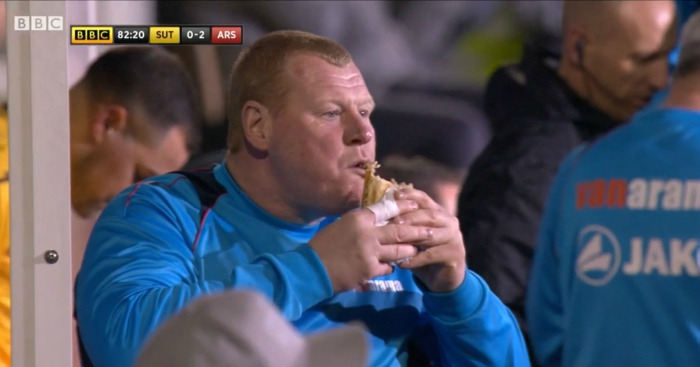 Sky Bet used to have ‘It matters more when there’s money on it’ for their advertising tag line, as though football couldn’t satisfy you in itself, and you needed some sort of additional fix to make it matter, to make it enjoyable, to briefly thaw out your frozen soul. It always seemed a pernicious statement, speaking of dull, pointless lives, needing the adrenalin of the threat of money loss or, less likely, the glory of money won.

Although I don’t gamble, I do know how addictive gambling is. Eight years ago this month, me and my missus rented a house in Las Vegas for five weeks. We were doing quite well at the time, or at least, we had access to a giant f*ck-tonne of credit. Back then, we were dedicated boozers, and we soon worked out that you got free drinks in most casinos if you sat at a poker machine and pushed enough money into it. Like so many before us, we thought we could balance gambling losses out against free drink. But of course, no matter how much we drank, we couldn’t quite manage it.

Like Jonny Wong, we knew we could never win, we were just trying to lose a little more slowly. We could no more hold on to our money than grab mercury. And it went on like this for 36 days. We just couldn’t stop. As we drank more and more free liquor, we lost more and more money, but kept pumping more and more in to try and stem the losses. A few big wins deluded you into feeling you were getting close to even. You weren’t.

So we dug ourselves a £35,000 hole and jumped into it, drunk and screaming wildly into the infinite black velvet desert night sky. Climbing out would take years.

Now looking back, it feels like it was one long period of psychosis (and not just because Winty and the boy Tyers, formerly of this parish, were also there). We should’ve realised that being fully paid-up members of the If A Thing Is Worth Doing It’s Worth Over Doing Club, gambling would get its hooks into us and would only let us go once it had cleaned us out, stripped us naked, and left us on our knees in the desert, with only a loaded pistol as a way to solve our problems.

Losing money whilst pished on free tequila and gin feels perversely like a win, especially when you’re from a poor background, when in reality, you’re just a big fat loser. Yet it was so compulsive.

And because I felt it’s lure so strongly, I worry about gambling being so pervasive in our football lives. Games are preceded and followed by TV ads for betting companies. Ten Premier League clubs are sponsored by international gambling firms. The second, third and fourth tiers of English league football are all sponsored by Sky Bet. Listen to talkSPORT and they’re giving you in-game and half-time odds, telling you how much you could win if x,y, and z happens. The same goes for TV: up pops Ray Winstone with pre-match and half-time suggestions for bets to place and encouragement to feel that you are master of your domain; a betting overlord, traversing the globe in search of profit.

At every single football ad break, the first ad is always for gambling. Betfred, BetVictor, Bet365, William Hill, Paddy Power, Unibet, which is now pitching for the educated middle-class male market (it’s always aimed at men, it seems) or Coral, with the fat bloke and the blonde woman – and that is just a small selection. There’s all those heinous, Ladbrokes Life ads where they try to establish different characters, such as Generous John and The Professor, who just look like idiots that have a horrible existence, their pain only numbed by lager and gambling.

Lad Broke, indeed. ‘Ave a bang on that.

Gambling is a terrible addiction which can ruin lives every bit as comprehensively as any drug you can mainline. And like a confection designed to melt at just the right temperature in your mouth, to make it so deliciously compulsive that you will overindulge, the betting industry knows just how to press our psychological buttons, even offering up ready-made excuses for your losses. The Ladbrokes Life caption, for example: “When you win, it’s skill, when you lose it’s bad luck.”

‘Where’s the fun in form?’, says one of the ‘characters’ from the Ladbrokes Life adverts. ‘When you know, you know you know…you know?’

Anywhere from 0.5% – 3% of the population of Europe has a gambling problem and an addict’s most favoured sort of betting is acca betting, the exact sort of betting pushed most at us football viewers.

This isn’t a harmless bit of fun, even if Kammy does look good dressed as a woman. In fact, it’s so not a harmless bit of fun, that the industry has had to pretend to care about its punters’ welfare with vacuous advice such as ‘When the fun stops, stop.’ Well, frankly, if the fun has stopped, that advice is already too late. You’ve already got a problem.

“Please bet responsibly,” says Ray, which is just as pointless as ‘please drink responsibly’ on a bottle of vodka. People without a problem don’t need telling; people with a problem can’t take the advice.

Betting used to be something you had to enter a bookies to do. You had to brave the smoke-filled, gadgee crowds to put your money down. Now, it’s intentionally been made so easy to lose your money that you hardly notice it’s even happened.

At least in Vegas you know you’re on a Fear and Loathing, Electric Kool Aid Acid Test in a Kandy-Kolored Tangerine-Flake Streamline Baby. You know it’s not normal life and that this is one big freak out which will end. Yet football betting has deliberately become unremarkable through its persistent omnipresence, the encouragement to gratuitously lose your money made standard, as though it’s just a natural part of life.

What is this doing to the quality of all our lives, whether we do or don’t gamble? Do the grubby, downmarket values not cheapen all of us? Can we not raise our eyes to the sky and stop staring at the soul-sapping smartphone odds? Are we not about better things than winning or losing money? Surely there are plenty more fulfilling intellectual and emotional stimuli available, without pretending that pointlessly throwing money away is fun.

At least in Vegas we were being social – it involved attractive waitresses in skimpy clothing. We laughed, we had the time of our lives, we rocked. By contrast, football betting on a phone seems a desperate, solitary, sad little habit carried out in a Wetherspoons with the piercing screams of a hen party from Seal Sands as a soundtrack.

Compulsive gambling, like compulsive drinking, is clever. It sneaks up on you, tells you you’re having a good time, tells you anyone who says you aren’t is part of the bleeding heart, PC, bedwetter, hand-wringing, do-gooder nanny state. You haven’t got a problem, or at least not a problem that one more big bet or one more bottle won’t fix.

That’s why football’s addiction to betting is so dangerous. It has put gambling front and centre, has encouraged and completely normalised extreme behaviour, marketing it away as just a bit of fun and banter, as all the while it drums up huge profits by preying on the vulnerable and the poor. This will have actively provoked and fed many thousands of people’s addictions, making their lives worse and worse. And that isn’t just pain the gambler alone endures.

When the fun stops, stop? Well, the fun has stopped, but there seems no stopping the takeover of football by the gambling industry, and that’s to the benefit of no-one except those who feast on the profits it carves out of its low rent, shallow, debased culture, and still, more importantly, carves mercilessly out of human misery.

Get yer mobile out.

Time to cash out.

Let’s all ‘ave a bang on that.

If gambling is a problem in your life, Gamcare can help you.