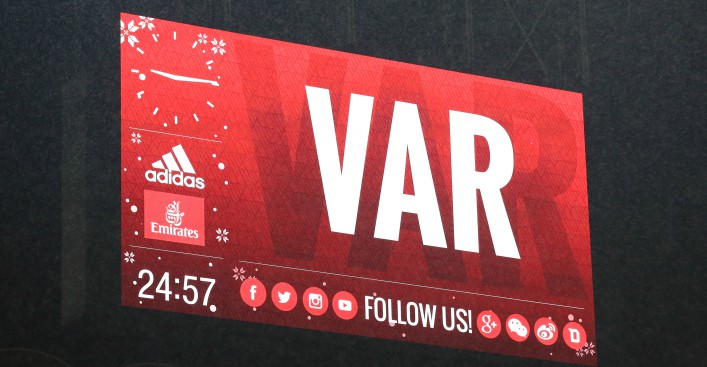 The future is finally here. VAR will be used in the FA Cup game between Brighton and Crystal Palace tonight. By next season, it’s likely to be more widely used.

Ex-referee Mike Riley, now director of Professional Game Match Officials Limited charged with the deploying of VAR, says it aims to correct 2% of total decisions made in a game and will only be used for black and white, uncontroversial decisions.

It will initially be used in what are considered ‘game-changing’ situations, such as a goal, penalty, red card and for mistaken identity. It all sounds sensible enough on the surface, doesn’t it? After all, we can all see what has happened in an instant replay and surely it’s ridiculous that the officials cannot. Where it’s been used in Europe it has helped correct decisions to be made.

There’s much speculation about the effect this will have on the game itself, especially how it will disrupt the flow, and how it won’t even resolve some issues. But one thing is guaranteed: if it is deemed a success, its use will not be limited to these mythical game-changing situations for long – no matter what anyone says now – because the fact is that almost all of a football match is a game-changing situation. No one piece of action is divisible from the rest. It exists as a whole, with one action influencing another for two periods of 45 minutes. Maybe this is not acknowledged or understood enough.

It’s all very well to say it’ll be only used for ‘minimum interference, maximum benefit’ and may be invoked only two or three times per game, but that’s not sustainable in the long term. There is absolutely no way managers will tolerate one decision being verified by video while an equally important one is is not. It makes the game less rather than more fair.

It won’t be used for simulation outside of the box at first, but given how important that can be, and given the VAR person is sitting with the footage right there, why not use it? And that will be the argument for almost everything. Eventually it will have to be used across the whole pitch for every offence about which there is a scintilla of doubt because no official will want to risk not going to VAR and then being proven wrong. The presence of VAR will bully refs into relying on it. As injustice piles upon injustice, the demands for it to be used will be overwhelming.

Once you cross the “let’s just check the footage” Rubicon there is no way back. Football is littered with contentious incidents, small, medium and large in every game. This deconstruction of the sport into ‘game-changing’ incidents versus the rest creates an entirely false hierarchy of important incidents.

Also, VAR is, inevitably, given the laws of physics, a retrospective judgement. If the referee wrongly halts play for a foul which replays prove wasn’t a foul, VAR cannot rewind reality and restore the punished side to where they were before the whistle went.

At the moment, errors apply to both reactive and proactive calls. It’s even-handed in that regard. But going forward under VAR, that can’t be the case. You had better hope the refereeing errors you suffer from are ones that can be overturned, because when you have a game where one side has a striker wrongly flagged offside as he scores, that moment is gone and no amount of VAR will bring the goal back. Then if the other side go up the pitch and have a penalty awarded for a push after consulting VAR, you have not resolved unfairness or injustice.

It’s also worth saying that VAR will not be available to the amateur game, obviously. Thus what for over 160 years was one game officiated the same from Hackney Marshes to Old Trafford, will have become two different games. Do we really want that?

But practicalities aside, there is an even greater point to be made about the nature of football and of sport: it’s played by humans. We all make mistakes. We need to accept this and not feel that it is in any way second best to perfection. This is what it means to be a human and those who can’t accept this are seeking to achieve the unachievable, as well as the undesirable. Just because we can do this, it doesn’t mean we should.

Variables in football increase unpredictability and one of those variables is the inconsistency of referees and the making of errors. Sport is not clinical science. To try and make it all happen without errors is fundamentally against the humanity of sport. People will go on about the money at stake because of one decision or another, but that is just another nail in the soul of the game. Football is sport, not banking.

This need to tidy everything up is very dispiriting and I can’t help but feel it is being instigated by those who are scared of football’s innate anarchy. To listen to Mike Riley on BT Sport describe how VAR will be used was to listen to an almost nightmarish vision of football. Yes, some decisions will be made correctly that otherwise would not be, but that is not enough reward for the ride to a final destination where many decisions will be VAR’ed, the game changed and fragmented and still no-one will feel any happier than before.

Football is a perfect imperfection and we should not be turning away from that beauty.