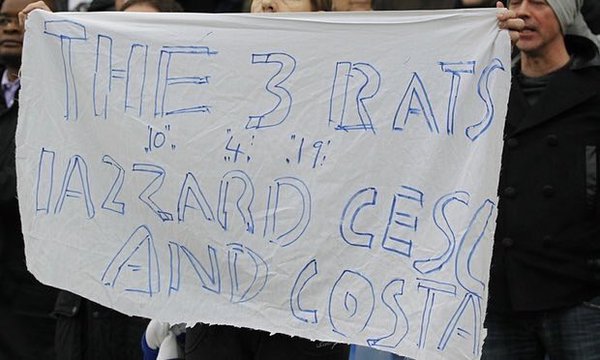 On Saturday afternoon, Chelsea supporters chose to protest against the behaviour and attitude of several key players. Fans felt these players had betrayed Jose Mourinho and caused his sacking. Because the one thing a man who victimised a key member of staff with gender-based slurs prides himself on is professionalism.

One of those banners is displayed above. The Creator was not satisfied with demonstrating their love and gratitude for The (A?) Departed One, but instead attacked those apparently most responsible.

We have a right to respond, and feel we must do so. There are so very many issues:

1) Why the use of individual blocks to comprise the letters rather than one single shape? We presume that this is to reflect the disparate nature of Chelsea’s current squad, the conflicting personalities making up the whole shape? That’s probably it.

Or is it to look like stones placed on top of each other – the ‘T’ is particularly good for this – an attack on the caveman behaviour displayed by the players? They are such simplistic beasts after all. Again, very droll.

2) Why the need to extend the ‘3’ to give it longer arms (are they arms? They can’t be arms but we’ve gone with arms now)? Were you worried it just looked like a squiggle before that, or maybe a snake? Actually, that snake reference could have worked. Adding a forked tongue and stripes to your ‘3’ would have added an artistic flair sadly lacking from the original. Everyone’s a critic nowadays.

3) We’ve now arrived at the word ‘rats’, and must pause there. It’s superb imagery, that much is beyond question. It’s just that you can’t but help notice that the first letter has definitely been altered.

There’s no denying it, it says ‘bats’. Your mind plays clever tricks on you as you read it casually for the first time, but look again: ‘bats’. Spurious website likeacat.com (honestly, here’s the full link http://www.likeacat.com/bat-symbolism_ep_53-1.html) says the following on bat imagery:

‘Bats are symbols of rebirth – the facing of fears and being reborn. Through this we learn to release fear and anything which does not fit with our new growth.’

Actually, they’ve nailed it. This is the rebirth of Chelsea, and these three players. Hats off.

The website continues: ‘The bat is a symbol of the challenge to let go of the old and create the new – death and rebirth. To many this is distressing, thus so much negativity around it. They symbolize the facing of fears – entering the dark on the way to the light. The Chinese were one of the few exceptions, because to them, the bat symbolized good fortune and great happiness.’

This is spooky now. Chelsea have let go of Mourinho and are replacing him. Roman Abramovich also has lots of money and good fortune. ‘Abramovich’ also contains two letters of the word ‘bat’. Coincidence? Pah.

It’s meant to say ‘rats’, isn’t it? Which is more than a little sinister.

4) Next comes the numbers of the three players, placed above their names like the heads of traitors placed on spikes. They are in quotation marks, but placed not only in the traditional location above the letters but also below. Not quite sure why, to be honest. Do four speech marks indicate an urge for the multitude to hound out these traitors together, deriding them with one communal voice?

Probably not, on reflection.

5) Most of the focus over the word ‘Hazzard’ focuses on the ‘zz’ in the middle, or more importantly the superfluous ‘z’. Is this ‘zz’ a subtle dig at Hazard’s ability to send Chelsea supporters off to sleep this season. Quick, someone run a tap with tepid-but-not-cold-because-that’s-a-common-misconception water, because Eden got burned!

In fact, there is probably a much more simple explanation. The Creator is clearly just a fan of Bo, Luke and Daisy Duke.

6) Straightening off that second ‘Z’ was unnecessary. It still looks like a lightning bolt, but now a messy lightning bolt that you f*cked up before trying to correct.

Still, that’s hindsight for you, and nothing is mocked more by hindsight than permanent marker on white cotton.

7) Let’s play a game, and be honest. You’re only cheating yourselves, remember. Did you notice that it says ‘IAZZARD’ rather than ‘HAZ(Z)ARD’?

Us neither. Bang goes the ‘Dukes of…’ theory then, but in comes another. The ‘Ia’ to start the surname is an ingenious Shakespearean dig at Hazard – he is the villainous Iago. “And what’s he then that says I play the villain.”

8) Nothing but love for referring to Fabregas as ‘Cesl’.

It conjures up the image of an old lord called Cecil, strolling about the midfield wearing a monocle and regularly holding up his hand in apology for a misplaced simple pass.

EDIT: Could also be a tribute to Cecil the Lion, as there is a lion on Chelsea’s badge. Even I don’t believe this sh*t any more.

9) What’s the first rule of banner-making? Plan out the words first and fit them in accordingly.

Nobody cares for letters squeezed into the end of lines with blank white spaces like icy deserts on the other side. Shoddy.

What’s worse – spending time and money making a banner to take to a football match, or spending 20 minutes of your evening writing about one? Answer that while I close down likeacat.com.