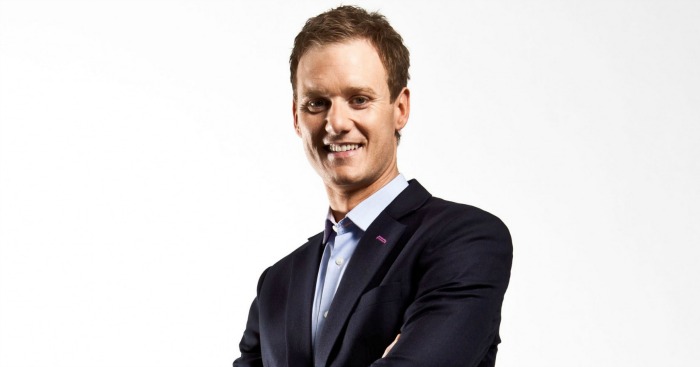 This week, Johnny holds an ammonite fossil while working on a Sunday, in order to enjoy Dan Walker on his telly.

Fashion police
Now, I’ve written a lot of these pieces but I’ve never had access to semi-naked photos of the subject matter. I offer this up without comment, primarily because I have no idea why it even exists as a thing, nor if it is aesthetically pleasing or not. It just seems weird. You never saw Des Lynam doing this sort of thing.

When clothed, we’re talking about a purveyor of plain blue. Can be dark or mid or light blue, but it’s pretty much going to be blue. As a proper 6’ 6” langshanks, his clothing choices are more narrow than for most of us. Basically you go to a High & Mighty store and buy whatever they’ve got in blue, don’t you, Dan? Fair enough. Less choice means more freedom and don’t let the Capitalist devil tell you anything different.

Neat hair. Has one of those huge foreheads which tricks you into thinking hair is in quick retreat. Looks a young 39 largely because being an evangelical Christian provably increases the amount of collagen in your skin. It says that in the Bible.

Lingo bingo
Crawley in West Sussex isn’t an obvious standout place to come from if you want a characterful accent. I have no idea if Sussex even has an accent. I’d have thought they’d be worried such an affectation might lower the house prices. Now lives in Sheffield having gone to university there. Seems no chance of adopting any thee-ing or tha-ing, nor an “ey up is thee winnin’?”

Dan is one of those people who just has a voice. It’s permanently informal and both accentless and without local colloquialisms. The advantage of this is that, as a national broadcaster, everyone can understand you and the home counties aren’t disturbed by the gruff enunciation of the working class, or worse still, northerners. The potential downside is it can makes everything you say sound a bit bland and computer generated by the TV Sports Bot 3.5

Hits and misses
Well let’s pull up onto the sidewalk and take a look at Big Dan.

A lot of decent hits on his CV. He’s done Football Focus for seven years, and let’s not underestimate how much hard work that is. Has recently started on BBC Breakfast which is a very high profile gig, albeit for an audience that is barely conscious and is largely concerned with pushing food into the mouths of children. I’ve always found watching TV in the morning an unsettling experience, a bit like when you find a pub open at 10.10am and you find yourself nipping in a for a couple.

However, this appointment hasn’t been without controversy as he took the coveted ‘senior’ position on the left as we look at it of the sofa, when co-presenter Louise Minchin, is far more experienced. What? A younger, less experienced man being elevated above an older, more experienced woman? Gosh, that’s never happened before. It’s almost as though sexism is a subconscious default in society.

But Dan lays this at bigger feet: “I firmly believe that God has a plan for me to progress in the industry,”

Oh no, you’ve set the Creationist Religo Alert alarm off, Dan. Hold on, I’ll just knock it off the ceiling with a brush. There. Now don’t do that again.

OK, let’s do this. So you see yer man Dan, he doesn’t work on Sundays due to his beliefs about God an’ that. Religion aside, let me tell you, Sundays in the 1960s and 1970s were a tedious, slow-drone of monotony that was an abomination against God’s creation and, let’s face facts, shopping is the new God. Even if the old God doesn’t like it much, he doesn’t seem to be able to do anything about it. I saw a stat the other day – more knickers are bought on Sunday than any other day. That’s the new holy. Mmm holy knickers.

It’s a common view amongst people in this country, at least, that Creationism is utterly laughable. Indeed, to some religious people, not believing in the astonishing depth of the nature of evolution seems to be not taking God’s creation seriously. You think God couldn’t have invented evolution? Oh ye of little faith.  I’m a great believer in tolerating everyone’s weird phases in life, not least because I went for a few weeks believing a giant ball of positive energy, generated by the positive vibration of the Earth, lived under Teesside and was responsible for the Boro’s good cup run. The fact this belief coincided with the ingestion of a large amount of small mushrooms is entirely coincidental.

All this being said, when it comes to presenting, the fella has got the easy-going, laid back vibe down to an artform. And this is why he’s doing so well, I think. You can’t faze him on live TV as this funny clips reel from the Olympics well proves

And I reckon, this is why he’s doing well. He’s really, really likeable and while you might inwardly sigh about the creationist thing – it’s hard not think he’s a thoroughly lovely fella. This piece would have been so much easier to write if he was a poor presenter and a charmless ass hat. But the exact opposite seems true.

Big club bias
No evidence of this. Unlike of fossils and dinosaurs, Dan. Jus’ sayin’, like.

Loved or loathed
Here’s the thing. The internet is a place where you will as much intolerance of anything as your soul can withstand, but Mr Dan Walker is largely very much appreciated. The fact he’s great at his job and makes us feel happy shines through and overrides the astonishment at the whole C-thing:

“Good presenter. If Lineker ever left MOTD he’d be a good replacement. Love the Friday Team News he does on Twitter.”

“He’s great. Really engages and comes across as one of us as a viewer. He seems down to earth and very likeable.”

“Dull, not sure he likes football, he’s your Nan’s favourite presenter but James Richardson has more charisma in his left toe.”

“I can confirm that his poached egg recipe is superb – been using it for years. Not surprised he’s described as ‘vanilla’ tho.”

“A bit too squeaky clean for me.”

“Big fan. Really like him. He manages to get something approaching insight out of his pundits, as well. Good egg, our Dan.”

“Vanilla. Beige. Bland. Maybe he will surprise and do an ‘Icke’ but I doubt it. Typical BBC central casting.”

“Safe pair of hands. From the Lineker Stable of niceness + professionalism. Is he too nice though? or too tall?”

“I quite like him, probably cos he’s an actual presenter and can read an autocue without making it blatant.”

“Doesn’t seem to actually like footie. Reminds me of the phone shop manager from Saxondale.”

“He has a bit of a potato face but a good presenter, elevates everyone around him.”

“Seems lovely and manages to present nearly everything on BBC. His poached egg technique is a marvel too.”

“I imagine that no matter what time of the day, he smells shower fresh.”

“Hard to take him seriously once you know he’s a Creationist.”

“If the vanilla orchid fell to the ground and mutated into a football presenter, that mutant would be Dan Walker.”

“Seems to never get p*ssed off ! Annoyingly positive all the time. Typical BBC clean safe pair of hands.”

“The sort of presenter who is so inconspicuous that you turn up for a party at his house and end up forgetting who the host is.”

“How can he not believe in dinosaurs when he works with them most weeks?”

“I can never quite get on board with someone who has the same views as Sarah Palin.”

“Comes across as a thoroughly nice bloke and always welcome. Possibly too in thrall to the old pros?”

“Seems to genuinely love his sport, and his job, and that comes across – which is arguably the most important thing?”

“Easily and naturally pulls off the puns/gags/quips that other presenters struggle with and make look like fabricated fun.”

“Totally out of his depth at lower league clubs when they go there for FA cup games too. Middle class dad at a proper match.”

“Worked with him when I was on work ex at Key103. An incredibly good egg. Never worked Sundays then too.”

“I don’t know if his views have affected his work, but seems affable enough and was fantastic on BBC4 olympics coverage.”

Proper Football Man
Well, you don’t need me to tell you that our Dan ain’t no PFM and will not even be presented with the application forms. They know him as The Vicar, of course.

But yer PFM, he loves a bit of religion because, God forgive me father, for I have sinned – I should never have played 4-4-2 in that cup tie, and nor should I have took a wee in Merse’s pie, or been caught wearing stockings in Debenham’s lingerie department. It was just a bit of banter, Father.

The PFM does need absolving of his sins, so The Vicar is always welcome, even though they will take every opportunity to imply he is a predatory homosexual with a fondness for altar boys, because that’s the only jokes they know about churchy types. I’m not even dressed as a choir boy, Mark. Why do they have to wear a dog’s collar, Jeff? Is it for when they get taken for a walk? What’s funny about that?

Deano! Stop making up stories about Cloughie and pay attention, we’ve got a holy man present. He’s alright this one and his legs are longer than your whole body, so stop wittering on and pay attention. You can bully the sh*te out of him on Football Focus, if you want ‘cos he’ll never challenge an ex-pro, so that’s good.

But a lifetime of making things hell for the nice boys means they’ll have to try and corrupt him at some point, especially if they’re not in the studio with a wet towel to hand, or have forgotten to bring their scissors in order to destroy a perfectly good suit.

Right, give us that flask, Reidy? What’s in it? No, Blue Nun isn’t holy and neither is Buckfast just because it’s made by monks for drunks. Ooof, that’s evil. I love it. What’s in it? Fermented culled badger hearts, naturally, I knew that. Topped up with peyote vodka and cannabis oil lager? God bless you, Reidy, I’m already hallucinating. Come here Pards, put these stockings on, I think I love you.

Right, let’s get Dan drunk and make Miss Mechanically-reclaimed Chicken Carcass body of 1989 sit on his face down at The Spunky Habit Strip Club and Chip Shop. Mind I don’t think we’ll get him in a shopping trolley, TC, so go and steal as forklift truck, we’re having some fun tonight down at the B & Q car park.

Beyond the lighted stage
Presumably gives the Natural History Museum a big swerve. But as a dedicated man of Jebus, there’s plenty of charity work to do. His wiki says he’s an active patron of several charities including the Sheffield Children’s Hospital charity, alongside Jessica Ennis-Hill, Michael Vaughan and Lee Westwood. He holds a golf day for the charity every year, laid the first brick on the new hospital wing in 2015 and, in 2016, officially opened the £2.3 million MRI scanner. As we already knew, a nice boy.