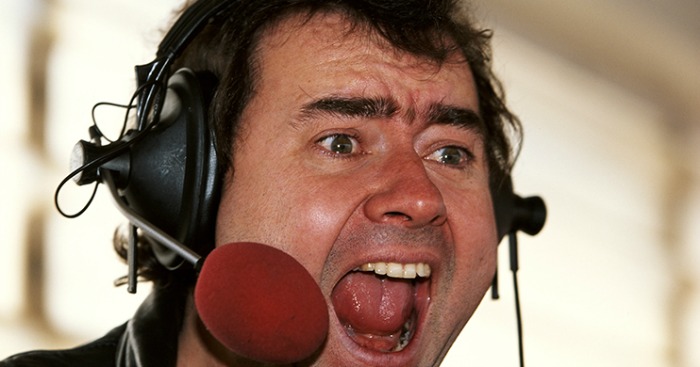 This week, BBC TV’s Johnny has his eardrums vibrated by the legend that is Jonathan Pearce…

Fashion police
Has the wonderful appearance of an old school, thick-set, middle-aged bon viveur who could belong to any point in time in the last 50 years. Loves an anorak, a jumper and, judging by online pictures, a beige suit which David Pleat would be proud to gallop across a pitch in, not to mention the obligatory off-duty polo shirt.

Hair exists in whatever random format it has decided upon on any given day. No obvious attempt to polish an image, which is always to be admired in the older dude. Getting a free pass to give up on your appearance being one of the few upsides of getting older.

Lingo Bingo
One of the most distinctive voices on our radio and TV for the last three decades. His early work at Capital Gold Sport was incendiary, high volume and  throat-tearingly loud and came with the full complement of vowel extensions for goal scorers.

And then, of course, there was the below. A truly amazing piece of work. You can almost hear the vein in his neck pulsing. Frankly, whether you agree or disagree with his viewpoint, it is, objectively, a magnificent aural performance.

Sadly for some, he calmed it down a bit when he went to the BBC, but recently seems to have been upping the excitable quotient a little and for this, much thanks. Hopefully, the attack dog of old will soon return.

Still drops into a pleasingly hoarse whisper at times of contemplation during a game, before belting out a hi-decibel verbal rocket as a shot goes over the bar. In the same way Jimmy Page once said that Led Zeppelin were all about shadow and light, Jonno is all about sturm und drang.

Can say the world “delicious” about a cross or a pass, with enough sibilant lusciousness to suggest someone has just placed a large chocolate cheesecake in front of him, along with chips, chicken tikka masala, rice, a 12-cheese-pizza and a diet coke.

A hint of his old Bristolian accent occasionally emerges in times of extremis. Can probably still drop a “gert lush” or an “alright my luvver”, though not when sitting next to Chris Sutton as a co-comm without suffering fearsome passive-aggressive treatment. That’s the way it is, isn’t it?

Hits and misses
When we think of Jonno, I think this is the image that comes to mind as the best expression of what he does.

In other words: shouting. Shouting very loudly. So loud you can hear his tonsils vibrating. This style is always going to divide the audience, but rather that than milky anonymous mediocrity.

Has always been keen to promote and commentate on women’s football, and has always done so with a passion and commitment equal to his work on the men’s game.

Much beloved for his work on Robot Wars, where his high octane bellowing seemed well-suited to the crunching of metal and the sporting of mullet.

Had a spectacularly confused spot of bother in being unable to get his head around goalline technology in 2014 World Cup over Karim Benzema’s strike against Honduras. Having to have anything explained to you by Martin Keown is never a high point in life. The fact he wouldn’t let it lie, and got more and more annoyed by what he thought was the truth, despite getting the whole thing wrong from the start, only added to the hilarity. But hey, it’s live and let those of us who haven’t made a monumental cock-up at some point in our professional lives throw the first stone.

Big club bias
Supports Bristol City and has never hidden the fact. And that alone guarantees an inability to have his head turned by the bright lights of the big clubs. Seems to work every game at the same pitch and intensity, regardless of whether it offers much in the way of entertainment.

Loved or loathed?
As you might expect, a man with a such a distinctive style very much divides opinion, but as I said previously, this is not a bad thing. I do think he’s a victim of the ‘damned if you do, damned if you don’t’ popular culture which demands originality and distinctiveness, and yet rejects it as too extreme when it comes along.

If you listened to his commentary of WBA v Burnley on Monday night, in tandem with Chris Sutton, it was a thoroughly entertaining 90 minutes as the two of them took turns to take the pish out of each other, made sardonic quips and generally fill the airwaves with entertainment, as well as football observation. Banter, in the modern parlance, rightly has a bad reputation, but the craic between these two was a proper expression of the art form:

“Not a fan of his delivery style, which is a shame considering that’s his “USP”. It’s all a bit too shouty/ not enough nuance.”

“Prefer mk1 that got roundly slated for being histrionic on C5.”

“Odd, feels like he’s prepared his lines in advance, and thus feels unnatural when he says it”

“Loud. Not as loud as he used to be on Capital Gold, which was proper stupid, insanely loud, but loud nonetheless.”

“Bumped into him occasionally and was always very pleasant.”

“Clearly has passion, but too shouty and desperate to pepper his commentary with naff puns that most dads would baulk at.”

“Seems genuinely excited even the more humdrum elements of any game, appreciates he’s lucky to be there.”

“You know instantly who he is. So many others are interchangeable”

“Distinctive which is a big thing in today’s BBC commentary. It feels like a moderately big game if BBC put him on a game.”

“Always had soft spot for Pearce, but his obvious want for growth of the women’s game set him apart. Huggable bundle of joy.”

Proper Football Man
For a start, Jonno is a proper PFM nickname. Solid, traditional and without even the faintest whiff of the exotic about it. Although men who work in the media can’t be allowed on the PFM works committee, they are willing to sign a select few in as their guests, as long as they drink in the lounge with the women.

Any man who has appeared on TV looking like this gets a key to their abandoned Portakabin of despair, parked in a lay-by off the A57 this week.

Every PFM appreciates anyone who looks like a recently released hostage, as that’s how most of them feel after a night out with Reidy. And the chunky older gentleman who understands the era when men were men and so were the women gets every PFMs approval too. Plus they also appreciate shouting as an art form almost as much as they appreciate men who can point with authority and do that “more energy” sign with their hands, which as every PFM knows, is the only thing that matters when it comes to being a top, top manager.

Not an obvious candidate for a night in legendary louche Bristol nightclub The Cock In Cider, and the attentions of Miss Most Apple-shaped Body of 1979 will be somewhat irrelevant. But when it comes to last man standing at the bar, going head-to-head with Reidy on the Cox’s Orange Pippin formaldehyde and sheep dip cocktails, he will not be beaten, my luvver.

All that being said, your PFM is not happy that he works on women’s football, or the BBC, which is full of pinko liberals like Gary Lineker, but is prepared to overlook this in return for a large bottle of Brut 33 and a Fray Bentos steak pie.

Beyond the lighted stage
Made a guest appearance on Dr Who as a sports commentator remarkably called Garny Diblic, which looks like an anagram of a rude word. Also commentated on something called Hole in the Wall, which sounds like something you might get up to in a dodgy strip club. One of his Robot Wars commentaries was used in the background of an episode of the Sopranos. Is Chairman of Hassocks Juniors, and you’d hope his duties would be to do commentary over the PA, scaring the children with an especially throaty roar.

Jonno is just 18 months older than me, this might explain why I warm to him. He is the product of a culture I understand, but even so, I can’t help but feel he’s still an under-appreciated talent, even though he’s one of the BBC’s go-to men for big games. I reckon those of us who enjoy him need to say so more loudly and more often.