Home F365 Says For less than a Pogba, Milinkovic-Savic is a no-brainer… 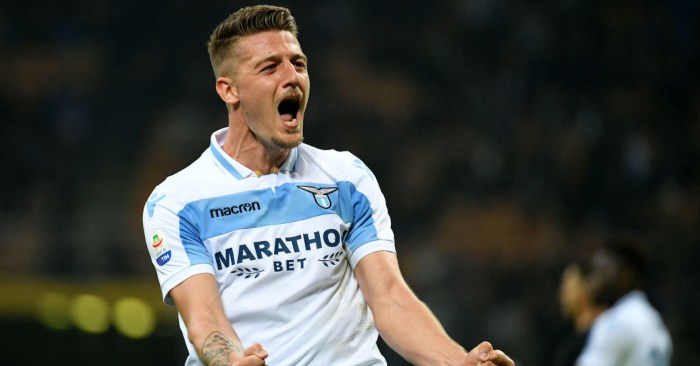 Modern football gets an awful lot of criticism and much of it is justified. The game has completely changed over the years, particularly off the pitch with overinflated transfer fees, ticket prices that hold even the most loyal supporters to ransom and changes to the rules and regulations that call into question its integrity. On the pitch, though, the innovation and constant rebuilding has been overwhelmingly positive; tactical appreciation is improving; coaches are cleverer, players are more versatile, and football is much quicker and more entertaining.

One of the more quirky aspects of the new football era that many detest is the bizarre relationship between shirt numbers and positions. Gone are the days when strikers always wore number nine, or a winger wore number seven; a player’s number is now part of their brand. Yet, while numbers have become more flexible, so have positions, and that has considerably improved the game. There are no longer 11 roles on the pitch; it isn’t enough for a full-back just to defend, a winger to just get to the byline and cross, a striker to just score goals or a goalkeeper to just make saves. Modern football, from a tactical standpoint, is about versatility and combination; there is a reason somebody like Jose Mourinho is supposedly obsolete at the elite level, because he has always preferred specialists, and nobody wants a specialist anymore.

Where this is most evident is central midfield – the hub of the pitch. As football gets quicker and more complex, players in that area need to impact games in many different ways. It is too early to say the era of the double-pivot is ending, but a desire for one player to dominate the position is increasing; this is the era of the ‘complete midfielder’. Mauricio Pochettino may have lost Mousa Dembele seven months ago, but by spending a club-record fee on Lyon’s Tanguy Ndombele, a player off the charts for his tackling ability, and with the physique formerly reserved for the ‘holding’ role, but also a deft touch and a passing range the envy of many in Europe, he has instantly rejuvenated and energised Tottenham Hotspur’s midfield. Paul Pogba is probably the player most synonymous with modern football in both senses; his social media presence and branding makes him a marketer’s dream, but he can also do it all when on form. It really isn’t a shock to see both Real Madrid and Juventus doing everything in their power to get him out of Manchester United this summer.

The Red Devils paid a then-world-record £89million to sign Pogba in 2016, and they’ll want their money back and then some this summer. It isn’t a given that Juve or even Los Blancos will be able to get that deal done, while United may have to consider a replacement should he leave. Lazio’s Sergej Milinkovic-Savic has become one of Europe’s most watched players in the last couple of years, but while everybody talks about Pogba and Ndombele this summer, the Serb has not been as high on the wider agenda as he perhaps should be. Simone Inzaghi’s work at the Stadio Olimpico has turned heads, and Milinkovic-Savic is a huge reason for that. While Inzaghi was used to being the bridesmaid as a player – in the shadow of his legendary brother Filippo – he has come into his own as a manager, almost taking the Bianocelesti back to the Champions League in 2017/18, gaining the same points as – but being pipped by – Inter.

Last season was much tougher, and an eighth-placed finish has stunted their progress a little. Milinkovic-Savic’s impact waned too; he missed seven league games and contributed to seven fewer goals than during in the Champions League push, which may go some way to explaining the buzz around him not being the same as 12 months ago. But that could work in any prospective buyer’s favour; now would be an ideal time for the 24-year-old to leave Lazio, as he enters his prime years. Like Pogba, Ndombele and a few others, the Serbian has it all – superb positional sense and passing, affording Lazio great balance in the middle, an aerial presence which gives him an advantage in both boxes, and an ability to drive with the ball.

He would not command a fee the size of Pogba, though Lazio president Claudio Lotito would surely push for a greater fee than the £63million Spurs paid for Ndombele. Indeed, reports suggest Lazio are looking for over £100m. Whomever misses out on Pogba – whether it be Juventus or Real – would be well advised to take a look at Milinkovic-Savic, while if the Frenchman were to get his wish and leave Old Trafford, spending a significant chunk of that fee on Milinkovic-Savic could be a real coup for Ed Woodward and Ole Gunnar Solskjaer. Like Dan James and Aaron Wan-Bissaka, who have already signed this summer, the midfielder would surely thrive in the versatile and intense system that is being implemented.

Reports in Italy have claimed Lotito is keeping the player ‘prisoner’, and it beggars belief that he isn’t being put under more pressure to sell by a host of interested parties. Milinkovic-Savic is the epitome of the modern midfielder, one who doesn’t get pigeonholed because of his size and instead uses it as a weapon in his arsenal to excel both offensively and defensively. Players in his mould will almost certainly become commonplace in football, and a deal is there to be done by one of the elite clubs this summer. He is trapped at Lazio; if somebody can set him free, they’ll be getting one hell of a player.