Home Home Page Front Page For Valencia, the time simply has to be now… 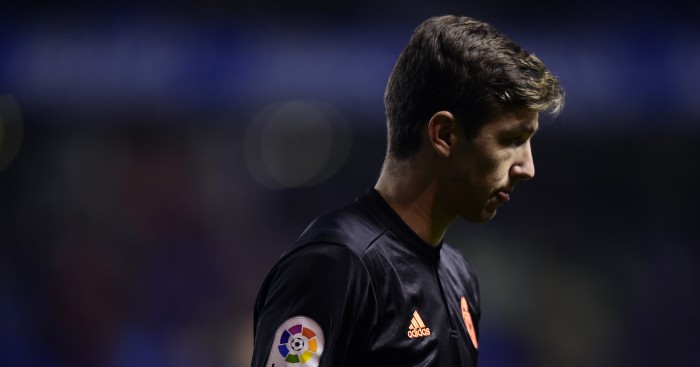 Real Madrid’s disastrous attempt at a title defence aside, Valencia’s ascent to the upper reaches of the La Liga table has been the biggest surprise of the season so far.

Rejuvenated by the influence of new manager Marcelino, they came sprinting out of the traps, keeping pace with leaders Barcelona for the early months of the campaign and remaining unbeaten until December.

They have since struggled to keep up. Though they still occupy third place, they are undoubtedly flagging, and the verve and vigour that characterised their excellent start to the season has started to wane.

Before Saturday’s visit to Las Palmas, they had narrowly won their last two league games against Girona and Deportivo, having previously suffered two straight defeats at the hands of Eibar and Villarreal before the winter break.

Despite their recent shaky form, nobody predicted anything other than a Valencian victory over the Canarian side, whose season so far can generously be described as shambolic.

But that is exactly what came to pass. Valencia took an early lead through Santi Mina’s header, before Jonathan Viera equalised on the 20-minute mark. The game turned away from Valencia through their own doing early in the second half, when Gabriel Paulista stupidly talked himself into a sending-off after conceding a dubious penalty. Jonathan Calleri converted from the spot, and Las Palmas dominated the second half against Valencia’s ten men (which later became nine after Rúben Vezo’s late red card for an elbow on Calleri).

The defeat means they have now lost four La Liga matches, all of which have come in December and January. Between September and November, they won a club record eight consecutive league games, scoring 28 goals. Since then, they have only won three of their eight La Liga fixtures, taking ten points from a possible 24, and only hitting the net nine times.

This alarming reversal of fortunes is perhaps down to fatigue. The high-intensity style espoused by Marcelino can work wonders with fit, energetic players, but as the season wears on and lethargy kicks in, the blade is somewhat blunted.

He led Villarreal to sixth and fourth in his two full seasons as manager at El Madrigal, but all the groundwork for those excellent campaigns was laid in the first half of the season. In both 2014/15 and 2015/16 they only picked up 25 points in their last 19 games as fatigue took hold – enough to see them maintain their league position, but a significantly lower return than the 35 and 39 points gained in the first half of those seasons.

Marcelino will be hoping to offset this fatigue through the addition of new blood to his meagre squad. Francis Coquelin and Luciano Vietto have joined this month from Arsenal and Atlético Madrid respectively, and neither player has featured a great deal for their previous club this season. This has the twin benefit of adding freshness to the squad, and allowing Marcelino the chance to afford a rest to some of his players to prevent burn-out.

This could be crucial as they look to consolidate their position in the Champions League places. Before the season started, nobody realistically expected Valencia to be in with a shout of Champions League qualification, but given their superb start it would now be a crashing disappointment if they failed to qualify.

This is not only true from a footballing perspective, but from a financial one too. The extra revenue from Champions League qualification could balance the books, helping them to conform with Financial Fair Play regulations and allowing cash for new signings.

Four of their current stars (Geoffrey Kondogbia, Gonçalo Guedes, Andreas Pereira and Vietto) are on loan at Mestalla with a view to permanent moves. Each player has indicated that they are keen to stay, but this may not be financially possible unless Champions League qualification is assured.

Valencia’s next league opponents are a renascent Real Madrid, who visit Mestalla on Saturday afternoon on the back of a 7-1 thrashing of Deportivo. If Madrid win, they will move within two points of Valencia having played one less game. Villarreal and Sevilla are not far behind, waiting in the wings to capitalise on any slip-up from the teams above them. For the first time this season, Valencia’s top-four position is under threat.

It must be said that Valencia are still performing well above expectations, and it is perfectly possible that their early-season performance may be enough to see them over the line. But it feels as though the outcome of this season will determine the future of the club – now that they finally have a stable manager and a talented, disciplined squad, Champions League qualification could be the springboard for continued success at the top end of the table.

Failure to qualify from such a commanding position would be a setback, and could result in departures of key players which could upset the balance of Marcelino’s carefully constructed squad. They will never get a better opportunity to begin their return to the top table of Spanish football, and they must not let it slip now.