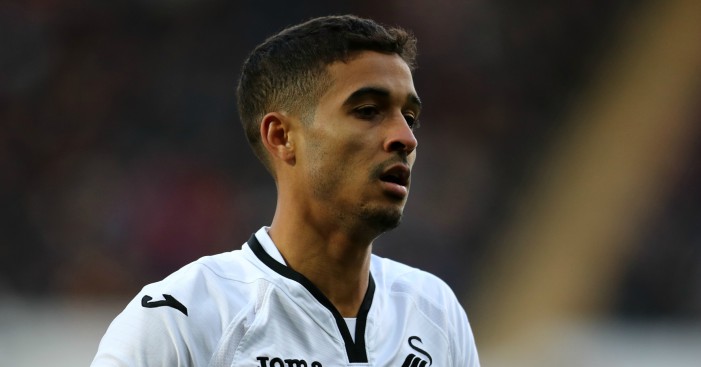 In the last edition of ‘Ordinary Player’ we looked at someone who hasn’t earned a starting role, and so is looking elsewhere. This time, we examine a player who’s a definite starter – but lots of fans would be happy to buy him plane tickets…

We all know that it materially increases your chance to play right-back for Spurs if you’re named Kyle. There’s Kyle Walker, of course, who isn’t playing for Spurs anymore because well, you know, and Kyle Walker-Peters, which under the circumstances reads like a joke, but is in fact a real individual who has actually helped England win a FIFA© World Cup. (Maybe it’s the Peters that did it.)

There’s even a third Kyle who has recently played right-back for Spurs, and like Walker is no longer in north London. He even went to a club named City. Naturally I’m talking about Kyle Naughton, who managed 42 league appearances for Tottenham, and is now in his third full season at Swansea.

At first he had to share the job. The incumbent was club legend Ángel Rangel, who in addition to having one of football’s greatest profiles, had been with the Swans from League One upwards. Although Naughton began the 2015/16 season as the starter, by December the 33-year old Rangel was back in the spot. Not exactly a ringing endorsement, and in fact Naughton started only four games in the second half of the season.

The Spaniard would have been a hard act to follow in any case. Smart, tough, excellent in positioning and passing, so much a leader that although he rarely plays now, he was named club captain after Leon Britton retired. But there’s no doubt his legs have been fading, and in 2016/17 Naughton took over the position full time.

It’s been, to say the least, a bumpy ride. It seems as if almost every month someone pens a column listing right-back as the side’s biggest weakness. When Arsenal defeated Swansea 2-1 at the Emirates this season, Arsene Wenger made a point of mentioning the Gunners had targeted the Swans’ right side. You probably don’t want to read some of the things said about him on fan forums.

So is it really that bad? Sometimes yes, sometimes no. Naughton has more pace than Rangel, but he doesn’t have the tenaciousness or positional sense. When his form dips, players get by him all too often, and he has a tendency to allow opponents to penetrate inside. When they go outside, too many crosses come in. He’s also been known to switch off, most memorably when Gabriel Jesus scored a stoppage-time goal to deny the Swans a draw at the Etihad last year. At his worst, he can look like a Championship player.

But he isn’t always at his worst. For periods under Paul Clement  and Carlos Carvalhal, he’s looked like a legitimate Premier League starter, a 6/10 player. He’s good in the air and decent on the ball, and when in form he blocks crosses and can keep pace with wide attackers. Swansea often play three at the back, and some of his better games come at wing-back, not only because he has an extra defender behind him, but because he can get forward more regularly when appropriate.

And speaking of getting forward, although no position is unimportant, for Swansea right-back seems to matter more than most. Since the club joined the Premier League in 2011/12, only once have they ranked below third in percentage of attacks from the right side. This season, as last season, they’re first in that category. Rangel regularly led the side in passes per 90 minutes, and this year it’s Naughton’s turn to top the charts.

In that regard he does a reasonable job. He’s a competent passer, and although under Clement and Carvalhal the team has tended to sit deep, he gets forward when the team is more expansive. His crossing is pretty much average, although he looked a lot better last year when he had Fernando Llorente to aim at. He’s no goal threat, although Swans fans will never forget his stunning strike against Sunderland which helped clinch survival last season.

In researching this profile I naturally went to Whoscored to look for interesting numbers, and found a few which are reflected above. But the most surprising number was 29, which is Naughton’s age. No way would I have guessed that. It means he’ll probably start to decline soon, and it’s a shame that we’re looking at the best of him now. It also makes you wonder why management signed him to a new three-year contract in the summer.

At the moment Swansea are on course to stay up, although there’s a long way to go. But you can be assured that even if they survive, plenty of people in south Wales and elsewhere will point to right-back as a weak spot, and urge the club to seek a replacement. A creative midfielder may be a more important need, but it’d be no surprise if management goes hunting for a new number two. Who knows? Perhaps Kyle Walker-Peters will be available.