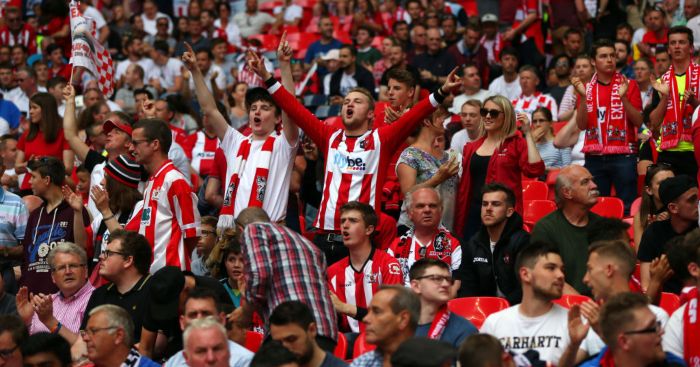 Why is it so hard to run a football club in a fiscally responsible manner? It shouldn’t be that difficult. Tens of thousands of small businesses manage to do it every year. They manage to pay their staff and bills from their takings and have a bit left over if they’re lucky. I’ve done it myself since 1986 and frankly, if I can do it, then anyone can.

A football club, especially a lower-league club, can’t be that complicated to run. Your expenditure falls into three broad areas: wages of players and staff; maintenance of the structure of the stadium; and looking after the pitch and training facilities.

Unlike most businesses, you know the days you’re going to make money. You get some cash upfront from season-ticket sales and a set amount from the Football League. Both of these factors should really help with financial planning when you have a relatively predictable customer base. You pretty much know within set parameters how many will be going through the turnstiles every home game. To add a little bit of icing on that cake, you even know that if you don’t play very good football or provide good entertainment, let alone success, a large percentage of those people will still turn up and pay you money. No other business has that luxury.

Some seasons there will be fluctuations in cash flow caused by one-off structural expenses and you might borrow to cope. Most businesses have an overdraft facility for this reason, though predictable income flow should allow forward financial planning to avoid this being especially onerous.

It might be hard to make a lot or even any money, but given all these advantages, it just can’t be that hard to not go bust, to not run up big, unsustainable debts or have to not have to rely on non-repayable loans from the owner. They should be self-sustaining like any business because, let’s be under no doubt, these are successful money generators.

Currently bottom of the 91 clubs are Scunthorpe United. They turned over a healthy £4.1million in 2018 and yet made a pre-tax loss of £4.3m.

This isn’t sustainable. It appears that without the money of owner Peter Swann, and his reported £340m fortune, it’d be out of business. But this wasn’t a one-off bad year for Scunthorpe; they made a £5.6m pre-tax loss the year before. This is obviously a failing business that Peter is keeping afloat. But when you’ve got that level of income, there should be no need.

The problem is they spent £3m on wages by having a 30-man squad for the 2017-18 season and paying them far too much. This doesn’t happen in normal businesses. It can’t.

It would suggest that they could have paid every one of those 30 about £100,000 per year! That would put each player well in the top 5% earning bracket in this country.

Clearly, in reality some would be on much less and therefore others on much more. It absolutely beggars belief some are so highly paid and what’s more, there’s no virtue in it. They finished 5th in 2017-18 and second-bottom the following season. They are now propping up the entire league. Disaster. They’ve spent millions they didn’t have and flopped badly.

As a business it is doing a great job of generating money. It is hugely popular compared to any other activity in Scunthorpe. Over £4m (same as Bury) is a great turnover for an SME of Scunthorpe’s size but the financial perspective has been entirely lost.

Incredible financial extremes have been normalised in football. No-one flinches at a £100k per week as a wage in the top flight, so maybe £100,000 per year for a Scunthorpe player just seems low by comparison. But it isn’t. It’s really high.

While there are lots of issues ongoing in the collapse of lower-league finances – and many stem from the Premier League’s grotesque financial model, setting such a horrible example and tempting greed merchants and profit hungry asset strippers into clubs with the lure of big TV money if promoted – it has to be said that, looked at dispassionately, clubs like Scunthorpe and many others are just massively overspending, especially on wages. It is that plain and it is that simple, endlessly digging themselves into deeper and deeper holes.

So we are left with the unfortunate self-evident fact that many owners, regardless of how great they’ve been in business previously, are just rubbish at it when it comes to football. Maybe they like the power of keeping a club alive with their money. I don’t know. But it’s no way to run anything and it makes the club’s survival very vulnerable to the whims and financial status of owners.

It’s often said that fans put pressure on their club to spend to get success. I know this is sometimes true but responsible owners should resist such calls and tell fans clearly and unequivocally what’ll happen if they do overspend. Most will understand. Most don’t want to be the next Bury.

We need to find a different, more responsible model of ownership as a default, not least because plenty of owners, even the decent ones, end up hating their role, resented at every turn for not being richer and not spending more, even when they’re already spending too much.

At Scunthorpe, Peter Swann wrote an open letter to fans last year complaining not enough were turning up and generally bemoaning his and the club’s lot. I’m sure he didn’t think it’d be like this when he bought it and there’s only so long anyone wants to stick out the bad times. But if he pulls out, the club is knackered.

It’s often said that putting supporters in charge of clubs is dangerous because they’d run it into the ground but given the low bar for governance already set by so many, could it really get much worse? In actual fact, I suspect a club run by supporters would be run far more responsibly because the fans are the ones who care most about their club’s future.

Here’s what you should do if you’ve got £4m of income. You have a first-team squad of 20-25 players and you pay them between £30,000 and £50,000 a year depending on age etc. Throw in some win bonuses and you’re spending about 25% of your income on playing staff wages, leaving £3m to invest in everything else that keeps a club going. It would leave a little for a transfer or two, as well as allowing you to pay all workers the Living Wage.

You’d be in no danger of going bust if you followed those guidelines. Why is that a bad idea? The answer is, it isn’t. You’re actually paying good money. Money that the vast majority of working people in the UK do not earn.

There are plenty of examples of how supporters’ trusts have done a far better job of running a club. Portsmouth were a financial basket case until The Pompey Supporters’ Trust bought it in April 2013, and in just 18 months were able to eliminate £7m of debt.

Other clubs like Exeter, Wrexham, Chester, AFC Wimbledon, FC United and a few other lower-league outfits are operated by such trusts, or trusts at least have a major input into the running of the club.

Having a football club run by the people who have its best interests at heart seems only sensible. So why isn’t it more common? Why is the default model that of a rich owner who bestows their munificence from on high for a while, or failing that a corporation or company, often one which no-one knows much about, running it via a chief executive who all too often seems tin-eared or is just no good.

Why are those the default models? They don’t have to be.

We seem to have a well-established paternalistic view of business in the UK. A bosses v workers mentality, possibly born out of a class war forged through centuries of the citizenry being oppressed by landed gentry and royalty with their private armies, then further embedded and hardened in the industrial revolution as a few industrialists grew rich off the sweated labour of the masses.

So when fans are asked what they’d like for their club, many still say a billionaire owner to splash the cash and make them successful. That’s the well-established, old-fashioned sugar daddy, deeply-rooted mentality that leads to such disastrous ownerships. Sometimes such owners are good and responsible but it has never seemed more hit and miss. We need other options.

Fans are the most important element in football and we shouldn’t ever forget this. Players, owners, executives all come and go. They are all just passing through; only the fans are forever, generation on generation. It is they who have the biggest emotional investment, therefore it makes sense that it should be more commonplace for it to be fans who actually own and run clubs collectively, in one way or another.

Bending the knee to a wealthy owner or a company and just hoping they do what is right for the club for the decades ahead, funding losses out of their own pockets, seems increasingly moribund, fragile and self-evidently not fit for purpose as a common model to allow a football club survive and thrive in the 21st century. It is at the root of so many of the problems that threatens so many clubs.