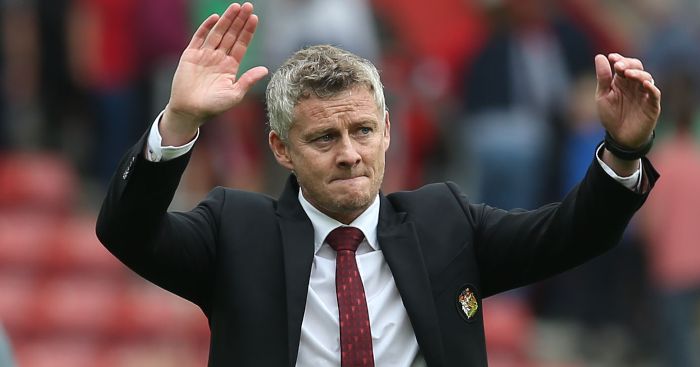 Send your thoughts to theeditor@football365.com in time for the afternoon Mailbox…

Johnny Nic neologism
I think it is time time for Football365 to add another new word to our lexicon. Now taking pride of place alongside the Proper Football Man is the Proper Football Fan (John Nicholson). The PFF only supports their hometown team–preferably while watching them loose in a driving rain storm while his friend in a trench coat . . . (long-time JN readers will know how story ends); uses the trope of everyone having their own idea about football to deny anyone who has an idea about football different from theirs from expressing it; hates the idea that people make money by presenting football to the wider public; believes that anyone who deviates from these principles is sell-out-tool of the man.

…I admittedly struggled to understand the point JN was making in his piece. I was with him for paragraphs 1 and 2 (and that 2best” is subjective) then didn’t really get what he was trying to say. My summary is rather long, but I think that says more about the article…:

4. The opposite of “then was better” is “now is better”. (DS invents “hindshite”)

5. THE PREMIER LEAGUE INVENTED HINDSHITE TO MARKET THEIR BRAND

6. All Hindshiters call anyone who doesn’t agree a “dinosaur” and therefore (implicitly) fail to identify there is a middle ground

7. “Best” is subjective, it is therefore impossible to prove ether way.

8. 1/3 – paragraph discussing what “best” is despite concluding it is subjective.

9. 2/3 – paragraph discussing what “best” is despite concluding it is subjective.

10. 3/3 – paragraph discussing what “best” is despite concluding it is subjective.

11. Facts should be used to guide our decision on “best”. (finally building on para 7).

12. In reality then and now was/is a mixed bag of the good, the bad and the average.

13. The “Premier League Era” is an arbitrary line with zero use other than to reinforce the brand.

14. Any “in the Premier League Era” stat proves is proof you buy into hindshite.

15. We’re too polarised as a nation

17. Communism references, the PL re-wrote the past and we’re all buying it.

Finally, I get it, and completely agree, you should judge the premier league based on what it is. However, I have some comments on the following paragraphs.

14. Correct me if I’m wrong, but the premier league era was a 20 team league (except for the 1st PL season), whereas the old first division was more. For goals in a season, I’d argue the different total number of game is a relevant factor to the statistic. If I had a good enough memory to use club sponsor to differentiate between a 38 and 46 game season you better believe I would. True it is arbitrary, but so is a season as opposed to a calendar year, yet one has a trophy.

15. I agree with this point, however the article polarises football supporters, so this article is more a symptom of the problem than it is offering a solution or a root cause (unless you actually believe the PL is to blame for Brexit).

17. This isn’t 1984. There’s nothing which says the Premier League is, and always has been the supreme league in the land. In fact, you mentioned “in the premier league era” in your article, therefore we (and you) clearly know there was a before.

So finally, in relation to real point of the article, when was it ever really “our” football? I think this is a generalised term for a time when clubs actually relied on match day revenue and therefore in effect fans had more power than they do now. If that’s your definition, start following the national league, or the Bundesliga with their lovely fan ownership models. If people stop going to PL games, or buying Sky Sports or BT subscriptions the next sale of broadcasting rights won’t bring in as much if they can’t gain revenue from advertising and subscriptions. This will increase as a % the reliance on match day revenue. Rinse and repeat, and football will be all “ours” again.

Just a thought, once gambling advertising gets banned from sports, we might already see a reduction of this, and it is betting companies who are willing to pay the big bucks for advertising.
Richard

Comparing Man Utd’s XI
Just read somewhere that Micheal Owen said that there is not much difference between Manchester united squad and the liverpool squad, wow…seriously? Lets not even talk about Manchester United bench with the likes of Rojo, Young, Mata, Matic, Fred, Greenwood, et all sitting pretty, instead lets compare Manchester United best XI with LEICESTER CITY’s XI (it would be an insult on Liverpool to make that comparison with Liverpool’s best 11).
De Gea is better than Schmeichel, yea..but Wan Bissaka, Shaw and Lindelof, are on current form inferior to Evans, Peirera and Chilwell.. Pogba has more pedigree than Tielemans (and I like Pogba), but comparing Ndidi and Maddison to McTomminay and Lingard is a non starter, James is good, but so is Ayoze…
Vardy is miles better than Martial or Rashford.. so a combined Man Utd/Leicester 11 will look like this.
DE GEA – Peirera, Evans, MAGUIRE, Chilwel – Ndidi, POGBA – JAMES, Maddison, MARTIAL/RASHFORD – Vardy
Kufre, Nigeria

More weight to the manager window argument
Further to my mail yesterday, today the news breaks that Huddersfield have appointed Lincoln City’s coach Danny Cowley six games into the season. To add insult to injury, Cowley is bringing his brother along, currently Lincoln’s assistant coach.

Of course Huddersfield’s Chairman Phil Hodgkinson was happy to say “We firmly believed that they were the best men to take us forward, and we didn’t want to give up on them”.

Did anyone of the assembled media multitude think to ask him the question “What about Lincoln City? You’ve taken not just their head coach but his assistant too, where does that leave them? Six games into the season, and they have no coach and no assistant, how do you feel about that?”

I’m sure you’d have got some platitude-ridden response, but internally Hodgkinson would be saying “F*ck Lincoln, not my problem”.

It’s time to stop the coach-poaching madness. The transfer window was introduced to stabilize the playing staff situation, and for the most part, it has succeeded. It’s high time to put the same controls in place for the people who (hopefully) have the most influence over the performance of a team and the well-being of the players from week-to-week.

Huddersfield want The Cowley Chuckle Brothers? OK, get the deal done in July. Don’t wait until September when you have one point from a possible eighteen and then kick Mark Hudson to the curb and pull the rug out from under the feet of another club.
Steve, Los Angeles.

Assessing Chelsea
Seeing as it’s international break, it seemed like a good idea to assess Chelsea’s performance so far. Results-wise, they could have been a bit better, but they could have been a hell of a lot worse. As games to watch, however, they’ve been great. That isn’t to say it’s all been dizzying highs, although I guess that’s pretty obvious to everyone. As well as some great attacking play and lovely goals, there have been plenty of moments of nail-biting tension at the ends of the games, particularly against Leicester, where Leicester could have easily grabbed a winner, and Sheffield United, where Chelsea unsuccessfully tried to prevent United from equalising. And of course, the opening game at Old Trafford, which is officially the terrifying low of the season so far. Ultimately though, we watch football for the entertainment, which is exactly what the games are providing this season (credit to the opposition too) and that’s why you’ll find that most Chelsea fans are happy with the way things are going this season.

The Old Trafford result seemed, and has indeed been treated like, a freak result. They scraped a point against Leicester, who I think have proven to be a good team so far and will do very well this year, and the game against Norwich was absolutely fantastic, with the first win and Abraham and Mount getting some wonderful goals. The only real disappointment has been the draw at home to Sheffield United, considering the way that they conceded in both the first and last minutes of the second half, denying them a win to take into the international break. There are plenty of more difficult fixtures coming up (Wolves, Valencia, Liverpool in quick succession after the break, how about that?), but there are plenty of reasons to be cheerful too, namely players to come back like Rudiger, Loftus-Cheek, Hudson-Odoi, and of course, Kante. Reece James is another one everybody is looking forward to seeing play soon, particularly given Azpilicueta’s unfortunate Ivanovic-esque decline.

Another Chelsea fan wrote in fairly recently, seemingly pretty positive about Chelsea’s chances of making it out of their Champion’s League group. Most other Chelsea fans I’ve spoken to do not share his optimism, and while we certainly believe it’s possible, it’s going to be no walk in the park and possibly too tall an order. Anyway, it’s nice to be playing some strong but beatable European teams, all of which are relatively close too, which is great for the fans. That’s what you want from the Champion’s League isn’t it? And if these things mean anything, Ajax’s stadium was where Chelsea won the 2013 Europa League, and Lille was where Hazard was signed from, who won the Europa League with Chelsea in his first and last season. Which means Chelsea… will finish third and win the Europa League..? Yes, that’s what it must mean. But then, the last time Chelsea played Valencia in the group stage of the Champion’s League was in 2011, which means….

De Bruyne on fire
I don’t know how he does it, but that guy is extraordinary, I just love watching him. He is the only player I still wish we never sold, never over complicating things; keeps doing simple things extraordinarily. By the way last night he had a hat-trick of assists and off course added a goal, and if he remains fit all through the season, Man City might win the UCL as well.
All hail the Midfield Maestro, KDB.
Meziri CFC, Anambra, Nigeria