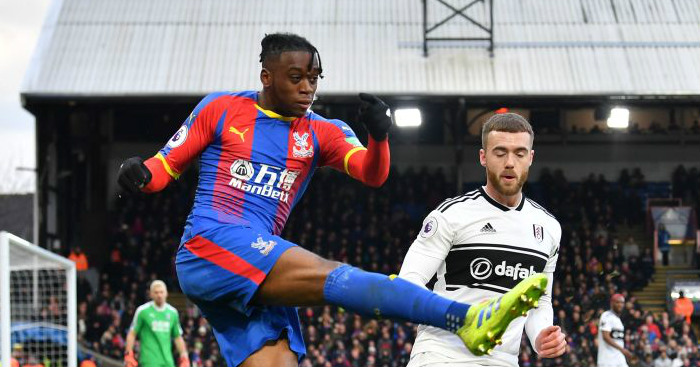 Contrary for the urban legend, it is not true that newborn babies emerge knowing how to swim; or not human babies, at any rate. This is tremendous news for users of municipal swimming pools, but is yet another disappointing reminder of our limitations as feeble humans.

Apparently nobody told Roy Hodgson it wasn’t true, because he threw Aaron Wan-Bissaka’s right in at the deep end back in February last year. The full-back’s first three opponents in senior football could scarcely have been more intimidating than Spurs, Manchester United and Chelsea, with his fifth game coming against Liverpool.

At no point in those early games, nor in the year’s worth of almost-constant Premier League appearances that have followed, has Wan-Bissaka looked out of place. Now 21, the right-back has missed just five Premier League games since making his debut, one of which came as a result of a suspension, and is only looking better and better.

The England youth player – who also qualifies to play for DR Congo – was ranked sixth in our list of the best ten Premier League players outside the big five back in November, before Manchester United reinstated that as a big six; just three months later, I suspect he would be several places higher on that list.

For a young player who is still in the process of learning his trade, Wan-Bissaka’s statistics defy all sense. He is miles ahead at the top of the list of players who have made the most successful tackles this season with 66; the next best is Leicester’s Wilfred Ndidi with 54. That is reflective not just of the frequency of his tackling, but an impressive success rate: he has failed fewer tackles (25) than Cesar Azpilicueta (27), but won 74% more than the Chelsea man’s 38.

Against Fulham on Saturday, he was familiarly formidable, keeping Fulham’s left-sided combo of Joe Bryan and Ryan Babel firmly at bay throughout the game with a combination of perfectly-timed tackling, sensible positioning, and good aerial skills. It was clear from midway through the first half that Fulham would find no joy attacking the Palace right. Claudio Ranieri’s side didn’t manage a single shot on target all game.

The key is in Wan-Bissaka’s incredible calmness. He never looks fazed or lost or despondent, but simply gets on with things with a laser-like focus. This is not to say he is flawless – what player is, particularly at 21? – but it is notable that on the rare occasions he does make an error, he tends to put it right pretty swiftly.

Last night, Aaron Wan-Bissaka lost possession on the edge of Liverpool's penalty area and sprinted 60-70 yards back before putting in a sublime sliding challenge to atone for his error.

The lad is special.

Yet to suggest Wan-Bissaka is a purely defensive talent would be mistaken. He has successfully completed more dribbles (40) than any defender in the Premier League – or, indeed, anybody who is not a winger or a centre-forward.

Inevitably, this has led to links with Chelsea and Manchester City, on which Hodgson said: “That’s good, it’s nice to know we’ve got a player of that calibre.”

He added: “As a football club have got no intention of selling him and we believe that his best way of continuing to improve and to become an even better player is to be with us here at Crystal Palace.”

They may not be able to hold onto him much longer. One need only look at the precipitous rise of former Hull City man Andrew Robertson over the last 15 months to see that bottom-half full-backs are capable of applying their skills further up the table; while Wan-Bissaka – and another Liverpool full-back, the 20-year-old Trent Alexander-Arnold – have proven that age need be no impediment.

It has been suggested that with his attacking threat and excellent passing range, Alexander-Arnold’s future may lie in the central midfield role he played as a youth. Even if that is the case, then Gareth Southgate and his successors need have no cause for concern at full-back. Wan-Bissaka may have started his career being thrown in at the deep end, but if his first year of senior football is anything to go by, then the sky is the limit.