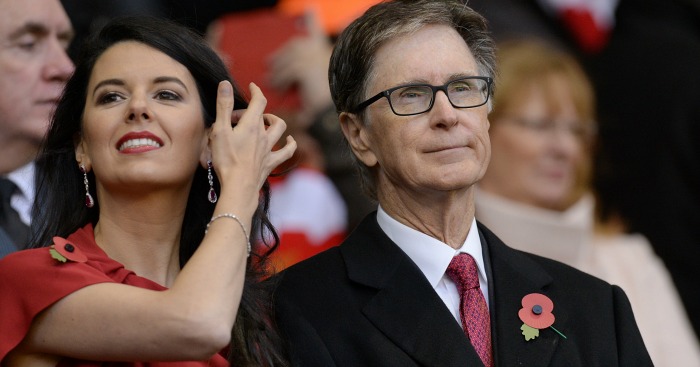 Former Liverpool managing director Christian Purslow has suggested the club may become more expansive in their approach to spending on transfers.

Purslow helped broker the deal that saw Fenway Sports Group takeover the club from the mismanagement of Tom Hicks and George Gillett.

Since that deal in 2010, FSG, led by John W. Henry, has spent prudently, strengthening the playing squad, despite refusing to compete with the huge sums being spent by the likes of Manchester City and Manchester United.

Purslow believes the owners’ approach is an astute one.

He told the Liverpool Echo’s Blood Red podcast: “I think the club is in a very stable and improved position. It is financially managed in an extremely skilful, professional and responsible way – and those are words that are near and dear to me as a business person.

“It is prudently managed, and never again could I imagine – certainly under this ownership group – the kind of financial irresponsibility that characterised the previous period.

“That’s important, because it gives you a platform. But you can’t have everything in life, and when you’re up against rivals who have funding models that are limitless, as City do, and in United a competitor that haven’t had some of these distractions and have been able to in the last 15 years gain a huge commercial advantage. Those are very deep-pocketed competitors whose ability to pay wages and fund transfers is higher than Liverpool’s is today.

“I think Liverpool are in rude financial health, and so that would suggest that their par is somewhere between third, fourth and fifth.”

Purslow admits FSG have made mistakes, but the American owners have demonstrated that they have learned their lessons.

“I honestly feel that FSG, like Ronseal, did exactly what it said on the tin when they took over,” he said. “They had an iconic sports team in America, which they had been patient in restoring to its former glory. They had a case study in what not to do at a football club too, let’s face it. They had perhaps the most notorious case study in football history, actually.

“I think they would say that the first two or three years were tough, they made lots of decisions which they learned from.

“I think people know this, and it’s true, but the speed of the sale process was so fast that they didn’t have a lot of time to plan for the future. They were learning on the job. I don’t think they expected to be so in the deep end so quickly.

“Now we are seven-and-a-half years in, they have learnt well, have made big decisions around Anfield, have an A-list manager and a prudent financial approach. Those are the cornerstones of their approach.”

Now they have laid the foundations for future success, FSG may now become “more expansive with their capital” when it comes to the transfer market.

“There will be people – fans, media – who will say they want them to spend more, to buy Paul Pogba for £90m or whatever,” he said. “I think it’s a perfectly reasonable observation, and it might change. They might become more expansive with their capital now they have nailed down their cornerstones.

“The new domestic TV deal provides further stability, and the overseas revenue is likely to exceed last time. So I would have plenty of sympathy for the view that they can afford to be more expansive going forward.

“I’m an investor by background, and so are they, and I think you can make an argument as an investor that the strategy which makes most value for Liverpool in the long run is to make Liverpool a winning club as opposed to an ultra-competitive top club. To do that, you might have to speculate to accumulate.

“They have the potential, without doubt, to fight each year for the Premier League and to go deep and long in the Champions League.

“To shorten those odds by investing more absolute money is the choice they have in front of them. I wouldn’t be surprised if they do so, but knowing their background I would be surprised if it wasn’t just a gradual ramping-up – always with the backdrop of financial responsibility.

“And given the circumstances which existed when I was at the club, where we were drowning, nobody wants to go back there.

“Ideally, you want financial rectitude and trophies. The other way, financial prudence and no trophies? That doesn’t feel so great for the average fan.

“Finding that medium is what the business of owning football clubs is all about, and I have to say the American model is about erring on the side of caution, making money, financial sense, common sense, and that isn’t the way Manchester City, Barcelona, Real Madrid, Paris Saint-Germain are being run, so it’s going to be hard to knock those teams off top spot.”

Purslow believes the appointment of Jurgen Klopp was one of FSG’s smartest decisions and the former club executive has backed the German to deliver the title back to Anfield. .

“It was a coup to get him as manager. Because he fits beautifully with our club in every respect,” Purslow says.

“The way he goes about his work, the way he treats people, the way he plays football, he feels like a brilliant fit.

“And more importantly than that, he has won titles without being the number one spender. And that is the job description at Liverpool.

“We will never be the No.1 spender in English football, and yet we want to be champions. So we have got a manager who believes it isn’t just about the money. You can see that what he believes, I believe it too, and that’s why I think we have got the right person.

“We are well positioned to cement third, fourth on average, over say a five-year period – but do I believe Klopp can deliver the title on any given year? Absolutely!”