Home All The News Former England keeper Ruddy up for grabs 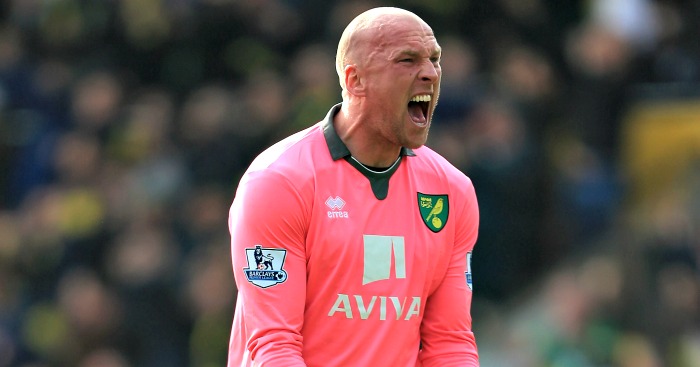 Former England goalkeeper John Ruddy tops the list of seven players who will leave Norwich in the summer.

The Canaries are overhauling their squad and will not offer a new deal to the 30-year-old Ruddy after seven years at the club.

Sporting Director Stuart Webber told the club’s official site: “We’d like to place on record our sincere thanks to all of the players who are moving on for their contribution to the club and wish them all the very best in the next chapter in their careers.”

Ruddy joined City from Everton in 2010 and he earned an England cap against Italy in 2012 and made 242 appearances for the Canaries.

Bassong joined from Tottenham in 2012 but had been pushed to the sidelines this season while Bennett, who moved from Peterborough in 2012, has played 119 times for Norwich.

Midfielder Mulumbu has struggled with injuries during his two years in Norfolk while Turner has not played a league game for the club since February 2015 and Lafferty has managed just four goals since 2014.

It is the start of major changes at Carrow Road with Webber – who also needs to appoint a new manager – looking to revamp the squad which has failed to make an instant return to the Premier League.

The Canaries are eighth in the Sky Bet Championship ahead of Sunday’s final game of the season against QPR.

Meanwhile, Norwich have extended the contracts of left-back Harry Toffolo and goalkeeper Declan Rudd for a further year.