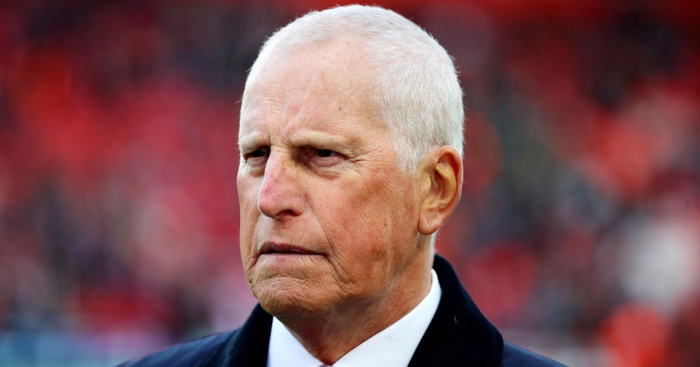 The player is viewed as one of the best goalkeepers of his time, having won a host of trophies with both Liverpool and Tottenham.

He was also a coveted player for his country. Clemence won 61 caps for England before retiring from the international scene in 1983.

The Football Association responded to Clemence’s death on Twitter, saying: ‘We are extremely saddened to learn that former #ThreeLions goalkeeper and coach Ray Clemence has passed away at the age of 72. All of our thoughts are with Ray’s family, friends and former clubs at this time.’

Clemence started his playing career with Scunthorpe United in 1965. He played for the club for two years before moving to Liverpool.

He joined Bill Shankly’s men for an £18,000 fee and went on to make an impressive 470 appearances for the Reds.

Whilst playing for Liverpool, Clemence helped the team to win five first division titles – ensuring that they pretty much dominated the 1970s.

They were hugely successful in cup competitions, too. With Clemence in goal, Liverpool won an FA Cup, a league cup and three European titles.

They also won the UEFA cup on two occasions and the European super cup once.

The keeper racked up another 240 appearances for Spurs during seven years at the club. He helped them to win the FA Cup in 1982 and the UEFA Cup in 1984.

On the international stage, Clemence is remembered as one of England’s best ever goalkeepers. It was unfortunate that he had to compete for places with another legend, Peter Shilton.

Clemence retired from international duty in 1983 after a painful knee injury. He later joined the England setup as a coach under manager Glenn Hoddle.

He remained as England’s goalkeeping coach until 2007, before being reinstated in 2012.

Clemence is regarded as one of the best keepers England has ever seen, especially by both Liverpool and Tottenham fans.